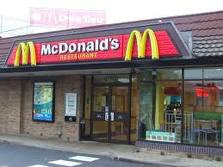 Even the "bargains" at McDonald's are no bargains.

I recently had a chance to visit McDonald's twice. This is very unusual for us as we usually don't visit fast food restaurants and try to limit the amount of times we eat out.

However, Mark and I both had dental appointments early in the morning about a week apart. Mark doesn't like to eat breakfast before he goes to the dentist for various reasons including the fact that he tends to gag and doesn't want to barf all over the dentist. Those are probably good reasons.

But by the time he's done with his dental cleaning, he's very hungry having not had breakfast and we looked about for a place to eat something. There is a place across the street called Grandy's which is a southern institution. If you like plates of food piled high with sausage and biscuit gravy and home fries this is the place for you. Unfortunately it's far too much food for us at this point in our lives.

Since we were on our way to pick up the camper from the storage lot, we decided to stop at the drive-through at McDonald's and get an Egg McMuffin. Once you get in the Drive-Thru, you feel kind of rushed as you cannot view the menu board until you're right at the ordering station. At that point people are requesting your order through the speaker and you are in panic mode is there is a line of cars behind you. And this,of course, is by design.

We ordered two egg McMuffin meals with hash browns and coffee and the total came to a staggering $11.38. That's nearly 12 bucks for breakfast. In case you were late for school that's an awful lot of money. The funny thing is we went to the Wholesale Club the next week and picked up two cartons of 18 eggs each for under $4. That's about $0.10 an egg.

I did the analysis on this before so I won't repeat it here. But needless to say, you could prepare an equivalent meal they serve at McDonald's for $6,  for around a buck.

The next week it was my turn to go to the dentist and I went by myself. Afterwards I thought I'd try McDonald's again, and this time see if I could find a better value. I dismissed the drive-in window. The drive-in window I think this designed to steer you toward higher-priced meals which are prominently displayed on the menu.  The less expensive items don't appear on the menu board at all, or if they do are hard to find.

I went inside, as I had to use the bathroom anyway. There was a line of people at the cash register, but four brand new kiosks were not being used. I found this interesting that people felt they got better service at the cash register than they did at the kiosks. But the cash register is also a trap. People stand in line staring into space and then when they get to head of the line, the cashier asksso them what they want, and they stare at the menu board and go "Ahhhhhhhhhh.. I'll have aaaaaa.....".

Again, the menu board is designed to promote high-priced meal options and specialty sandwiches. The lower-cost options are either not shown on the board or are very hard to find.

Since there was no one at the kiosk, I felt like I could take my time and explore the various menu layers. And it was an interesting experience. The cheapest items are hidden behind layers of menus. I managed to locate the sausage egg burrito which was a dollar, and ordered that, along with a cup of coffee for a $1.29.  $2.29 is a lot less than the $6 that I spent the week before.

But I noticed another menu page showing specials, that showed two egg sandwiches for $4 whereas the regular price was $3 each.   When you order at the drive-thru or the cash register, they don't necessarily ring up the lowest price or offer you the special deal.

Moreover even the kiosk tended to promote expensive specialty sandwiches and oversized meals. The big promotion there was a triple Quarter Pounder sandwich which was advertised with a television video showing hamburger patties flipping in the air. It was far too many calories for me anyway, and the cost was several dollars.

I noticed on the kiosk, hiding down in the corner, the McChicken sandwiches are still only a dollar - probably a much better value and better for you in terms of calorie count.

This is not to say that you should eat at McDonalds. The problem with these fast food restaurants is that people tend to use them as kitchens. It was interesting visiting the place at 10 in the morning after my dental appointment as most of the people there were getting "McCafe" drinks which were little more than ice cream and whipped cream flavored with coffee.

And judging by the uniforms the customers were wearing for local retail businesses, it doesn't seem like they really could afford to spend 15 minutes waiting for these coffee drinks and several dollars of their hard-earned  pay. If you think about it, making minimum wage, after taxes, you're probably taking home a few dollars an hour at best. To spend an hour's worth of labor for a coffee drink seems kind of obscene.

When I was a kid growing up the working class carried lunch pails to work. A Dad often had a large Stanley Thermos filled with coffee which lasted him throughout the day. Mother would make sandwiches and maybe a small snack which he would carry in his lunch bucket. Not only did this save a lot of money, it saved a lot of time.

But we are wealthier country today - and a lazier one as well. A lot of people claim they don't know how to cook simple food items. Or they say it's too much of a hassle or it takes too long or costs too much.

This morning, I got up and put the tea kettle on. Before the water could boil I managed to fry two eggs, two vegetarian sausage patties, melt some cheese and put it all in a flax seed roll up with some spinach and onion and hot sauce. This literally took minutes to prepare and cost probably a dollar or two at most.

In the time it took to boil water I was able to make breakfast. And yet I know people here on our Island who will drive 10 to 15 miles to have breakfast served to them at a restaurant. It really makes no sense whatsoever.

And I suppose I could have merely driven home and made breakfast for myself - and in retrospect it probably would have been a better choice. Because even ordering the most cheapest thing on the menu was still no real bargain.

And it is no accident that McDonald's sets up their menus and their menu ordering system so you feel pressured to pick something quickly - and thus eschew the lesser cost options in favor of the more expensive and attractive upscale meals and sandwiches. And an army of marketers and psychologists set up this system designed to ensnare you and take your money. And you and I are pretty powerless against the sort of coercion.
And that's the real lesson I learned at McDonald's that day.