Life Choices, Job Offers, and the Exploitation of Labor (by the left?) 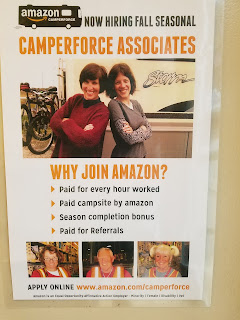 Jeff Bezos has a job offer for you.... don't expect it to pay much, though.  Friend of the working man!

Two recent events in our travels gave me food for thought.   We were staying at Pawnee State Park in Nebraska - right on the lake.  It was beautiful, and we grilled (politically incorrect) hamburgers on the fire.   No power or water, but "dry camping" and it was fun.

The next day we left and stopped in Lincoln at a Shell station to get gas.  Four "dudes" in their 20's were loitering around an aging class-C camper, with a bucket of some sort and a 5-gallon gas tank.  One of them was wandering around, on the cell phone, with a guitar slung over his back.  He had amazing dreadlocks - for a white guy.

In case you didn't know how "dreads" are made, they are not curled or styled.  Rather, you let your hair grow out and never wash it, until the oils and sweat and dirt cause the hair to curl into tight dreads.  You may lose some friends in the interim, as your hair will stink to high heaven.  But once you have that "Sideshow Bob" hairstyle, you can then wash it, carefully, and not lose the curl.   Some fun, eh?  And why again?  Oh, right, making a style statement.

And like with tattoos and piercings, one that may limit job opportunities.  When employers see you with a getup like that, they might rightly question your values.   Of course, there are jobs where it doesn't matter - slacker jobs mostly.

But it struck me as sad that these four young men decided - and it was a choice - to travel cross-country by RV without any money, and instead rely on begging at gas stations for spare gallons of gas and spare change.  Oh yes, they did the "excuse me!" bit with their gas can as a prop, to beg for a gallon as they were "down on their luck" or some such nonsense.  Four strapping young men, in the prime of their life, unable to find work?  Shitty life choices!

If they got haircuts and made themselves presentable, they could easily find jobs and make money the old-fashioned way.  But of course, that involves hard work, and begging is an easier choice.   Plus, you don't have worry about some drug test at work.   Funny as it may seem, getting a haircut and not doing drugs are just non-starters for a lot of people.  When I was young, I thought that long hair and pot smoking defined who I was, and would have refused to do without either.   Then I sobered up, literally, and well, the rest is history.

At the KOA in Lawrence, Kansas (once again, fighting the headwinds that always blow through Kansas) was the poster shown above.  I thought to myself, "Well, here's an opportunity for these young men - and they already own an RV!"   But again, I doubt they would jump on this, as it would interfere with their vagabond lifestyle and require real effort.   But jobs like that abound.   Of course, they pay shit.   But I worked them - at that age.   So could they.

It struck me as odd that Jeff Bezos, who owns the ultra-liberal Washington Post, where Democracy cries in the darkness even to this day, also is one of the largest exploiters of labor in the USA.  People chastise me for shopping at Walmart, saying, "Don't you know they treat their employees poorly and pay then a pittance?"   I doubt either is true, but at least Walmart and the Walton family are not being hypocrites here.   Walmart represents unbridled capitalism at its finest (or worst - take your pick).  But at least they are consistent.   The same people who will "never set foot in a Walmart" have a stack of Amazon packages on their front stoop every night - all crap made in China and packed and shipped by non-union labor in union-busting Amazon sweatshops.

Of course, no one gets rich working for Amazon in the warehouse - just as no one on the floor at Walmart is becoming a millionaire anytime soon.  Or in fast food, for that matter.   But you do have choices in life, and you can "choose" panhandling because it is a pretty lucrative gig - you can make $10 to $100 an hour, tax-free, in some cities and resort areas, if your pitch is good and you appear to be vulnerable or a victim (get a dog, preferably a cute or pathetic one - it helps).

But we all have choices in life - to grow dreadlocks and live in a clapped-out Class-C motorhome, begging for gas money, or taking a job, even if it pays little, and living within your means.

And for the record, yes, I had to cut my shoulder-length long hair off when I went to work for GM.   It was worth it.

UPDATE:   Amazon just had a job fair for 30,000 employees (!!) unrelated to seasonal hirings.   They do pay $15 an hour minimum, so I guess it is a better place to work than Walmart or McDonald's - but maybe not by much.   It is hard work - they will pay you to quit!   I looked online, and they have 148 openings for lawyers.  Of course, this is a little to late in my career....