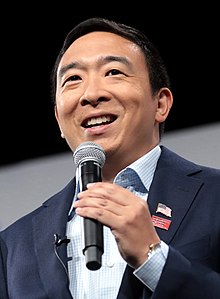 Giving away money is a bad idea - it makes money worthless and incentivizes people not to work.

Andrew Yang is at it again, promising to give away $1000 a month to 10 more families (after the initial three).   Surely this will put an end to poverty once and for all!  Job well done, Andrew!  Glad you fixed that.

The central premise of his Presidential Campaign (who the hell is this guy, again?) is to have the government give away $1000 a month to everyone in the United States.   Well, maybe not "everyone" but every household.   So get a divorce now, as you'll double the amount of cash you'll get from Uncle Sugar.  The best thing you can do for your kids, is send them to the foundling home - where maybe they too, will get free money.

Gee, this gets complicated, don't it?  When you throw money at people, all sorts of unexpected consequences occur.

The idea behind this proposal is that automation and "AI" (which is a trendy a thing to say as "block chain") is going to take over the world and take away our jobs.   So we better just give away money to people, so they can buy all the manufactured products made by robots.   We can all live in leisure while our robot overlords do all the work for us - even the thinking - and life on Earth will be paradise.

Maybe.  Perhaps not.   Automation isn't something "coming next year" but something that has been going on for a long time now.  It now takes less than half the number of people in an auto plant to assemble a car as it did in the 1970's.   The paint shop staff has been reduced from dozens of men with chronic lung problems to one guy who pushes a button marked "select color?"

Barcode scanners and computers have replaced all sorts of menial tasks.   When I was at United Parcel, we sorted boxes by hand, reading the labels and having memorized all the zip codes in the Syracuse area, could throw the boxes onto the correct conveyor belt.   A dozen human computers, handling each package.  Today, bar codes are read and actuators divert boxes to different belts and transfer stations, until the box is loaded into the correct package car.

In retail, bar codes have reduced the amount of labor involved.  No longer does Chuckie use his "pricing gun" in an after-school job at Sam's Grocery to put a price sticker on every item on the shelf.   Rather, a label appears on the shelf edge, and prices are scanned by bar code - far faster than it took Lurleen to punch the numbers (and department codes) into the old National Cash Register.   As a result, the number of employees needed has dropped.

And so on across the board - automation has already "took ur jobs!" away.  Yet today, we live in an era of record low unemployment and moreover, unemployment, while fluctuating, hasn't really skyrocketed, at least since the early 1980's.  So the stated "need" of this social welfare program really hasn't materialized.   People still go to work, even after automation, and will still go to work tomorrow, even after further automation.

Some point in alarm to the prospect of automated vehicles.  Robotic trucks and taxis will displace hundreds of thousands of people from their jobs!   What will all those unemployed truckers and Uber drivers do?   I am not sure, but I suspect they will find other things to do, even after robotic vehicles take over.

Oh, by the way, wasn't that suppose to happen already?   The delay of the robotic vehicle is an interesting phenomenon.   As I noted before, I wrote Patents on this technology back in 1990.   And the research dates back to the 1970s - before computers were cheap enough and small enough to make an autonomous vehicle practical.   But for some reason, there has been delay in introducing these vehicles to the public.   Oh sure, there have been some demonstration units out there "testing" for years now.   But how much longer will it take?

Just a guess, but longer than we think, and it may be that autonomous vehicles never become a "thing" as the powers-that-be will insist that a human driver be present, regardless.   Autonomous driving may be just a feature, much as lane control is on many cars and trucks today, or Tesla's vaunted "autopilot".   It may end up being a driving aid rather than a driver, but that's just a guess.

Even if all those people are out of work, they will find new jobs, just as the buggy-whip makers did, back in the day, after Henry Ford introduced his Model T.   Candle-makers and Whalers found new jobs and new things to do after the electric light was invented.  I think we don't have to worry about robots "taking all our jobs away!" just yet.

But what about giving away $1000 to everyone, doesn't that make them happier?   And in that regard, these "test" programs, such as Mr. Yang's are a real joke.   If you hand someone a present, in most instances, it makes them happier.   Give someone more wealth, they are generally wealthier.   Funny how that works, eh?

But, for how long?   History has shown that lottery winners tend to end up bankrupt, if they couldn't handle money before they won (as evidenced by the fact they played the lottery in the first place).   Will throwing money at people make them happier in the long-term?

And this is where "experiments" don't work.  When you hand out money to a select few people, as the experiments in this program have so far (including Mr. Yang's very modest examples) they are relatively more wealthy than others, and thus happier.   As some "poverty experts" point out, while the poor in America are far wealthier than the middle-class in many 3rd world countries, they "feel poor" in our country by dint of comparison of their wealth to others.

Oh, and that.   The retirees, who were promised $1500 to $2500 a month in Social Security, in most instances, are given this $1000 a month, instead.   So you can bet that all the old people will willingly vote for this proposal!  There will be riots in The Villages - any good politician knows not to mess with Social Security!

This idea will reduce a nation of workers into a nation of slackers - sitting around with their legal marijuana, waiting for their government check to come in, so they can buy more Soylent Green.   It is just a stupid idea of epic proportions.

And an impractical one.   Ideas are great and all, but to make them into laws, they have to be Constitutional, and moreover, have to pass both houses of Congress and be signed into law by the President.  Do any of these wacky ideas have a snowball's chance in hell of ever becoming law?  Of course not.

And that is the problem with the Democratic candidates - most of them are proposing things they know, deep down, will never become law.   Bernie's Socialism will never pass the House or Senate, even if both had Democratic majorities.    Debt forgiveness isn't going to pass muster, when the majority of Americans pay off their debts and don't see why the biggest slackers who made horrible life choices should be given a pass on tens of thousands of dollars in debt.   "Loan forgiveness" was a bad idea with houses, it is a bad idea with student loan debt.

And as with that idea, the "free money for everyone!" idea has another fundamental problem - even assuming this could become law (which it can't) who is going to pay for it?    I mean, come on, this would triple the national budget.   The only way to make this work without increasing our debt even further (and thus fueling inflation more) would be to cut the military budget down to one guy and a firecracker.   Do you think Lockheed-Martin is going to let that happen?  Do you think the guys at the VFW hall are going to vote for that?

These sort of "ideas" show how out-of-touch the Democratic Party has become - pie-in-the-sky ideas instead of making really hard choices and coming up with practical solutions to our current problems.  It won't be hard for the GOP to shout these down.

Sadly, this means four more years of Trump - which I think is part of the design of the Democrats this time around.   Let Trump take the blame for the inevitable recession that will follow - exaggerated by his tax cuts and interest rate cuts, as well as tariff wars.
Newer Post Older Post Home