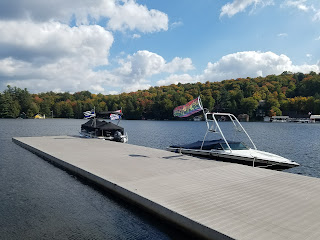 
I saw this at the dock at Old Forge, New York.  The flag in the foreground on the wake boat is a rainbow flag that has sayings on each stripe.  "Science is Real", "Love is Love", and so on.   The flag in the background on the party barge says, "Trump 2020".  Interesting contrast - old farts in a party barge getting fat and drunk and voting for Trump.  Young dudes in the wake boat, doing stunts on wake boards, smoking pot and (hopefully) voting for Biden.

It was a battle of flags - and values.   When did this whole flag thing get started?

When I was a kid growing up, when you talked about flags there was only one - the American flag. Maybe once in a while they would fly the State flag on a flagpole next to (but lower than) the American flag, or maybe beneath it on the same pole. But back then we didn't give it much thought. Flag meant one thing - the stars and stripes.

But over the years, it seems that people that have adopted various flags to express their political beliefs, and to show unity with other people with similar beliefs. And I'm sorry to say, but I think the gays were the first on the scene with this, with the rainbow flag. It was sort of a covert symbol that could be hoisted to express one's solidarity with gays or express your own gayness.

Of course, the Confederate Battle Flag has been used for generations, again, to show solidarity for a cause (a wrong cause) and today is being removed or banned.   Flags again - used to show solidarity, or to imply a greater support for an issue than perhaps exists.  The Confederate flag is disappearing from the scene (but going underground) but other flags are taking its place.

In recent years many more flags have been created, supporting various causes, viewpoints, and even sexual proclivities.  There is now a Christian flag which is a white flag of surrender with a cross in the corner. There are blacked-out American flags that have single blue stripes or red stripes to show solidarity with police or fireman. Oddly enough, these flags are very similar to the S&M flag which is a black and blue flag with a heart in the corner, or the "bear" flag with a bear paw print where the stars usually are.

A flag from pre-revolutionary war America has also seen resurgence, the "Don't Tread On Me" flag showing a rattlesnake coiled up. This has become to be a favorite with Libertarians and self-appointed "sovereign citizens" who erroneously claim that they are independent states (then they don't get to vote - right?).   Everyone, it seems, has their own flag these days.  Maybe because we are all forming our own countries.

In our travels across New York, which is considered a "Blue State," the prevalence of Trump flags outnumbers Biden flags by 10 to 1. It's not that Biden isn't very popular, only that people don't feel very exuberant about him, which is troubling for the next election. Fewer people may support Trump, but their emotional attachment to him is stronger.

The thing about these flags that disturbs me is that it reminds me of the scene from The Sound of Music, when Captain Von Trapp returns home only to find a Nazi flag adorning his mansion. He angrily tears down the flag and rips it in half, even though his family warns him that it's not a good idea to go against society's norms.

And that's the point of these flags. The idea of flying these flags is to show people strength in numbers. When all you see is a bunch of Trump flags, you get the idea that perhaps maybe there is a lot of support for Trump, even - if in fact - only a minority of people actually support him. And the same can be said for the gay flags and other flags as well.  And Nazi flags, while we're at it.

That's why I don't trust this whole flag mentality. While it may seem like an act of pride to show your support for gay rights or for President Trump, the waving of a flag sort of smacks of totalitarianism. And it's no coincidence that totalitarian governments are very fond of flag-waving and flag draping and flags in general.

In short, flags are a crummy substitute for analytical thought.  They are an expression of mindless acceptance and obedience.
Newer Post Older Post Home