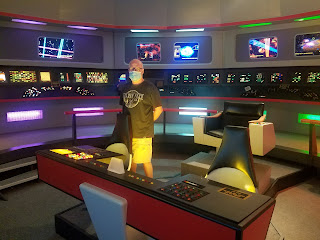 A neighbor recently died, just a year after retiring.   It is a sad story.  Life isn't fair.
Mark aboard the bridge of the Enterprise, in Ticonderoga, New York,


Our neighbor passed away after having some complications after what should have been a minor surgery - the same thing that killed Mark's father and so many others.  Stay out of hospitals.   What is sad is that almost two years to the day, her husband died while mowing the lawn, of a massive heart attack.  Sadder still, he was months away from retiring himself, and as a result, instead of a widow's pension, she got an awful lot less.  Tragedy piled upon tragedy.  Sadly, the last two years of her life were not happy ones. I am not sure she ever got over the unexpected death of her husband.

When we heard this news, we were kind of devastated for a while.  But it made us think that we are doing the right thing - by retiring early, enjoying life, traveling, and not worrying too much about things.  So many folks are obsessed right now, about politics, about rioting, about the virus - and yet fail to realize that life can be very short - shorter than you think.   You would think with a deadly virus going around, in particular, that some folks would realize this, but they seem to take the opposite tack - obsessing about the material, politics, or protesting, and then letting their own life pass them by.

Maybe that is one reason so many people are buying boats and RVs - just saying "fuck it, let's go have fun!" and getting away from it all.  Of course, that could backfire in a big way - living for today is just fine, but not if it means you will be broke tomorrow.

What makes me sad isn't our neighbor dying - people die, we all do - but that she missed out on a happy retirement with her husband.  And so many more people miss out on life itself, spending years - decades even - being depressed in the wealthiest country in the world.  "I'm so depressed!" I hear some 20-somethings say, because they can't have a fancy car or something.   They have a car, which to the majority of the population of the world would be an unobtainable goal.  They posit that happiness is measured by your bank balance or what brand of phone you have, what is parked in your garage - or whether you have a garage - and miss out on life in the interim.  Because, odds are, they may not have all the "nice things" they want, and if they did get them, that likely would be the worst possible outcome, as they would have to go into debt to get them.

My neighbor was fortunate in that she had a nice house, and a car, and was for want of nothing.  It was just that the clock ran out, which it tends to do, when we are making other plans.  They had planned their retirement and retired fairly young - but life isn't measured by how long you have lived, but by how long you have left to live, which sadly, is a number we never know until it is too late.  The end of life is a messy business, particularly for those left behind.  Very few exit this world with grace and panache.

There are some who come to our retirement island in their 60's and live here until they die in their 90's - nearly 30 years!  Others make it only a year or two, either because of unexpected illness, or because they delayed retirement decisions well into their 70's or even 80's, when the clock has ticked out.  I know people a decade older than me who are still dawdling about what to do about their retirement.  They want to downsize or move or do something, but there is no big rush, right?  They're only 72 and there's something good on television, anyway.

And so the clock ticks away, but they don't realize how little is left - and maybe because they don't want to think about it, they drown out the idea.

I have to laugh whenever I hear someone say, "I'll just work until I'm 70!" or something to that effect, as apparently they don't realize the average life expectancy in America isn't much longer than that.  What they are saying, in effect, is that they will have to work until they're dead, and that doesn't sound like much fun.

But as my neighbor's situation illustrates, even early retirement is no guarantee of a long a happy retirement.   When a man makes plans, God laughs.  So enjoy yourself while you can.  Happiness doesn't come with dollar signs attached to it.   Find simple pleasures and enjoy them...