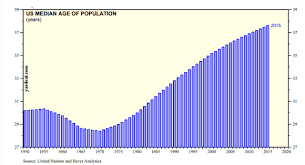 Getting old isn't what it used to be.

We were watching old re-runs of The Streets of San Francisco with Michael Douglas and Karl Malden - the classic cop show of the early 1970's.  In one episode, a shop owner is being worked over for "protection money" by a gang of young thugs (who got what was comin' to them - by the end of the episode).  He was later killed and Karl Malden said something like, "Well, he was an old man - 60 years old!"

That sort of made me laugh.  I guess back then, that was considered "old" but as our nation has aged in general, the median age has increased over time.  Back in the day, you could say, "Don't trust anyone over 30!" as that was only about half of the population.  Well, today, the median age is pushing 40, so if you don't want to trust anyone over 30, well, it's most of the population.

It is odd, there are more oldsters than ever before and average life expectancy has gone up almost a decade since the 1960's, (It has decreased recently mostly due to the opioid epidemic). Back when Karl Malden pronounced a 60-year-old as and "old man" he might expect to live another ten years.  Today, he likely will live two decades or longer.  A lot has changed.   And remember - most people of that generation smoked and used asbestos!  Imagine how much longer a healthier generation could live.

This was driven home to me by a trip to our local bank.  I keep an account there as a backup, as we had our Bank of America account  "frozen" for no good reason while travelling and it kind of scared me.  You are thousands of miles from home and now your credit and debit cards won't work?  That's why I always carry a backup in the safe in the camper - and another in the safe in the truck.  Yes, they make truck safes - not very expensive, either!

Anyway, I don't use the account much, other than for ATM cash (which is to say, once every six months) and I asked about whether there was a minimum balance required to avoid any monthly fees.  They said my account was no longer offered, but they could switch me over to a "free checking" account which provided free check printing (who writes checks anymore?) if I was 62 or older.  The clerk confidentially said, "But that doesn't apply to you."

I nodded my head and then realized, "It will apply to me, come this March!" and they both looked flabbergasted.  I was nearly 62 years old?  Yea, it kind of scared me, too.  I literally could collect social security this year, which I hadn't even thought about doing.

I digress, but I decided to wait on social security, at least a while.  The way I figured it, we have enough money to live comfortably for now, and by waiting, my "safety net" will be much greater, not only for me, but for Mark as well.  Might as well spend that 401(k) money and then use the max Social Security to live on, when the time comes. And when the time comes to "go into the home" Medicaid will kick in, as we will have spent all our own money.  Screwy math, I know.  And maybe I am wrong to think that way, but running out of money in retirement is scary.  We live on $30,000 a year (with everything paid for) and hopefully inflation won't ruin those plans just yet.

How did I end up being old?  And on an island where everyone else is older than me, I am constantly reminded that I am a "young whippersnapper" who is still wet behind the ears.  Maybe that has helped.  When you hang out and party with 80-year olds (and they do party - drinking and smoking pot and everything) you might tend to feel younger at 50-something or even 60-something.

Age does hit you at some point. One reason the girls at the bank were so skeptical of my advanced age was that I don't look old.  My temples have gone grey, but my face isn't old and wrinkly - the fat stretches out the wrinkles, as I like to say.  But sometimes in the mid-to-late 70s or early 80s, the wrinkle police check in, and if you have an older friend you haven't seen in a few years, the change can be startling.

They looked "youngish" before but now have that turkey waddle under their chin. And like an old cat, they lose weight and get bony.  Bony bunny, I used to call our 22-year-old cat.  You petted him and you could feel every bone, whereas a year before, he was plump.  The body starts shutting down and consuming itself.  Digestion gets a lot harder (it already has, for me) and pain tends to become a constant thing - which itself causes wrinkles and lines in your face.  When my sister died of breast cancer, she looked as old as my Grandmother - it was very sad to see. And scary.

But hopefully, that won't be anytime soon - but your body gets you thinking about it.  The good news is, 60 is indeed the new 40 these days, with many people continuing careers well into their 60's and 70's - by choice, not necessity.  And those who are retired stay active with all sorts of senior activities, such as down in The Villages.  The biggest health problem there (besides rampant STDs) is pickleball injuries - I am not making this up!

So this is good news.  We live longer and live better.  We feel younger at an age when people used to be considered "old".  When Social Security was started back during the 1930's, life expectancy was about 60 years.  Social Security worked back then, simply because few people lived long enough to collect it.  That is one reason why today, they are raising the age for "full" Social Security to 67 for people born in 1960 or later (for some reason they always use 1960 as a benchmark for these "fuck you" kind of deals.  Gee, Thanks!).  I am sure that the age limit will be raised again in the future and the age for "early" Social Security will be raised someday as well.  That is one argument for collecting early - get the money before they change their minds!

Today?  Well, Social Security is in "crises" because we aren't collecting enough payroll tax (they keep adding "holidays" for the tax, to counter poor economic conditions) and people are just living too damn long.  That, and the number of younger people working is stagnating.  The age pyramid is more of a minaret these days - and you can't have a good pyramid scheme without a pyramid!  Gee, maybe I should collect early!  This gets to complicated and don't even get me started on Medicare Supplements.

The nice thing about having old friends is that you can ask them what they did and learn from their mistakes.  One friend went with an AARP plan which they said sucked.  They are now on Medicare Advantage and claim it is cheaper and better.  Fortunately I have another two years to think about this.  Gee, time does compress as you get older!

What is interesting is that this all changed within my lifetime,which isn't over just yet.  I doubt I will be the Methuselah or the oldest living person (a crown that changes hands on a weekly basis), but I will have a life that is better than that of my ancestors, perhaps as long as, maybe longer.

But quite frankly, the way things are going in this world today, I am not sure I want to live too long.