Van Life - Training the Next Generation to Be Homeless? 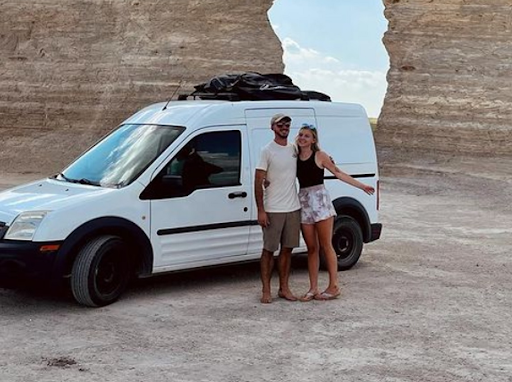 There are so many click-bait articles and videos on the Internet that basically seem to glorify the idea of living in your car.

The Gig Economy.  Side Hustles.  Van Life.  Convert a School Bus to a Camper!  You've seen them all, and they seem to make up a Greek Chorus exhorting the younger generation to basically give up on the American Dream, live in their car, and work part-time for Amazon, and part-time for Uber.

Is this by accident, or design?  Or the inevitable consequence of our "new economy" where workers are paid squat while others make billions?

It could be the latter - the Internet is like an amorphous AI that figures out what people click on and then crams that shit down your throat forever and ever, Amen!  So you click on a knitting video, and five years later, your husband is doing textile art.  We don't know if we are influencing the Internet or it is influencing us.

But it occured to me - and a reader at the same time - that maybe this Greek Chorus of voices, telling us to "work a side hustle" in this "gig economy" isn't reflecting a trend in society, but normalizing it.  And these "helpful videos" on how to convert a van into some sort of flophouse are along the same lines.  Housing too expensive?  Go live in your car!  It isn't homelessness, it's a kicky new lifestyle!

Or deathstyle.  The happy couple above were so enamored of  "Van Life" that he strangled his girlfriend and then killed himself.  Happily ever after.  No one talks about the end game to living in a vehicle and working these odd jobs - where it will lead you and whether it is just running in place or whether it is getting you anywhere.  Like I said in the posting above about living in a bus:

One reason why I got off Facebook, was that I "caught up with old friends!" and wish I kinda didn't.  One friend of mine, from my stoner days, confessed to me that he, at 50 years old, was living with his parents and working odd jobs for pot money, with no savings, no IRA, no future, no nothing.  What did he do for the last 30 years when I last saw him?  YUP - he was living in an old school bus, smoking dope and doing "gigs" at local bars for under-the-table cash.  He didn't even qualify for Social Security.   Van Life - what's not to like?

Yea, that's the "end game" to living in a vehicle.  It isn't much different from the "end game" to living on a commune.  My stinking hippie brother tried that - and after ten years of living in an unheated barn in Vermont, woke up one day and wondered where the fuck his life went.  I mean, he had fun and all, but he ended up going back to school (at nearly age 40!) to get a PhD which fortunately landed him a decent job running a small museum.  Others are not as fortunate.

Playing catch-up later in life is hard to do.  Your body gets older and frail and it is harder to do hard work.  You have to hope your mind doesn't go as well.  Trying to fund a 401(k) starting at age 55 (as a friend of mine is trying to do) is damn near impossible.  Your choice productive working years are far behind you.

But I am describing people making choices to do these things - bad choices to be sure, but choices.  The youth of today argues they have no choice - there are no full-time jobs, they are saddled with debt, and these "side hustles" provide no benefits and no retirement plan.  And of course, with the high cost of living, they cannot afford to save on their own.

Not being "boots on the ground" I cannot tell  if this is really true for some or all of the youth of today.  To be sure, there are some who made bad choices at an early age - going to an expensive school, borrowing too much money, and getting a pretty useless degree, or at least a degree that wasn't worth the amount of money they spent on it.  You have to be a smart student-consumer, and that doesn't describe most 18-year-olds in any era.  Sadly.

But then again, there are others who made better choices in life - spent less on college, got a more useful degree in a worthwhile field, and are making good money (sometimes over six figures) because their skills are in demand.   They aren't living in a van.

Still others are making a choice to forego work and live in a van or school bus and "see America" or whatever.   I've had friends do this - working for several years, saving every penny, and then hitch-hiking around the world (twice!) for a year at a time.  They were, however, able to go back to their careers and prosper.

So it is hard to say why these sorts of articles abound today and not in the past. Some cheery articles in some financial press outlets claim that "Millennials" (boo! hiss!) are choosing to engage in "polywork" where they have multiple jobs.  I am not sure anyone so much as chooses this as they are forced into it by a system that penalizes employers for offering full-time positions, as I wrote about recently.

It just seems that the great "invention" of Silicon Valley in the last decade has been to take minimum-wage or low-wage jobs (pizza delivery driver, taxi driver, warehouse worker) and then skim a little bit off the top by making them into "apps".   I delivered pizzas, I worked in the UPS warehouse.  I never had to send money to Jeff Bezos or to Uber as part and parcel of the deal.  Hell, I was making $8 an hour at UPS back in 1985.  Until recently, that's what Amazon workers were getting in some places. (and the older workers at UPS were getting $16 an hour - what many pine for today!).

It is hard to say which came first - chicken or egg.  Did the shitty post-recession economy lower everyone's expectations to the point where driving for Uber or working for Amazon seemed like a good deal?  Were people so stressed for money that living in a car or a U-haul truck seemed like a viable option?

I really don't know which is cause and which is effect, but the same people offering these "gig" jobs are often the same people controlling the media.  Hell, one of them owns his own newspaper.  I am sure there are plenty of cheery "gig economy" articles in the Washington Post these days.

My only observation is that we are on the precipice (and by that, a literal cliff edge) of a major change.  Something will snap in the next few months - maybe the next 18-24 months, perhaps before the 2024 election.  All these crazy "investments" like specious IPOs and "Crypto" and hyped "Stonks" are going to collapse under their own weight.  The bloated housing market will have to adjust prices if no one can afford a millon-dollar "starter home".  And wages will skyrocket - along with inflation - as the shortage of workers continues, unabated.  The birthrate has stagnated and we've kept out all those pesky immigrants - and my generation is all taking early retirement, with a pandemic making them realize life does not go on forever.

Cheery thoughts, I know.  But let me leave you with this nugget.  A friend of mine tried to argue with me about politics recently.  "Do you think your President is so great?" he said.  I told him that I don't view any President as "mine" (and another friend chimed in with the observation that Joe Biden is really a placeholder President - the unTrump).   I told my friend that I thought Biden was doing a better job that Trump.  He said, "Really?  How?"

"Well," I replied,"We haven't had an insurrection in almost a year, now!"  And that struck home.  He admitted that he hoped - for the sake of the GOP - that Trump would not run in 2024.  But that doesn't excuse my friend's endorsement (and voting for) Trump in 2016.  But it illustrates that everyone has their limits and there is a line that had been crossed.

But the funniest thing he said was this, "Kids today don't want to work!  That's why there is a labor shortage!"

Then I reminded him, "Didn't you just take early retirement at age 58?"   OK, Boomer.

Of course, so did I.  But you don't see me bitching about how kids are obligated to work shitty jobs for low pay!  This whole gig economy thing sucks and needs to go away.   And it isn't going to go away so long as we let people promise "more jobs" but only if we cut taxes for the very wealthy.

But like I said, I think we are about to see that change, drastically.