Mandatory Overtime - Getting What You Asked For! 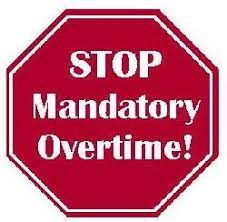 Companies often force workers to work overtime as it is cheaper than hiring more people.

One thing about employment, which I learned once I became an employer (Note: never do that!) is that it is costly to hire people.  As I noted before, not only do you have to pay your employees enough money to keep them from quitting, you have to match the payroll taxes (about 9% or so) so for every dollar you pay them, you have to come up with $1.09.

But it gets worse.  Congress expects you to provide healthcare, which is expensive - it can cost over a thousand per month per employee.  And then there are things like a 401(k) which is something you need to provide to attract good employees - and something you want to contribute to yourself.  In addition to all that, your employees have all sorts of rights, but not a lot of responsibilities.  And Congress has even forced you to enforce immigration laws!   Like I said, don't ever become an employer - it might turn you into a Republican!  God forbid!

As a result of all these requirements, there is a certain "overhead" to hiring a person - fixed costs per employee, no matter how many hours they work.  The system thus incentivizes the employer to work someone overtime rather than hiring more people.

At the major corporations I worked for (GM, UTC) this was a particular problem for hourly union employees.  Management would expect them to work "mandatory overtime" and it was a constant bargaining chip with the union, come contract time.  Simply stated, they required some employees to work overtime - for which they were paid time-and-a-half, and double-time in some instances.  While the employees enjoyed the extra money, many complained it intruded into their personal lives.

From the company's point of view, it was cheaper and easier to force people to work overtime than it was to hire additional workers.  If you needed additional labor, you could just ask an existing worker to work overtime - it was a flexible system for filling in labor needs.  If you hired an additional person, you have to cover that fixed overhead of health insurance and whatnot.  So two union workers, forced to work 60 hours a week, was cheaper than hiring three union workers and having them work 40 hours a week.

You have to be careful of what you ask for - in terms of benefits.

The problem isn't entirely the union's fault.  At GM, the game was to offer "benefits" instead of wage increases.  Benefits are not taxed to the worker (although this has been proposed time and time again).  So, for example, you offer $1 in health care benefits, it costs you $1 to offer it - not $1.09 it costs to provide $1 in wages.  To the worker, who sees maybe 75 cents of that $1 in wages, getting a full dollar of health care seems like a better deal as well.

By the way, there are many, many other benefits that employers can offer employees, including child care, which are tax-deductible to the company and non-taxable to the employees.  It is a win-win situation, from a tax perspective.

But the other nice thing about offering benefits is that in many cases, they were benefits not paid out right away.  So, for example, GM would settle a strike by offering a modest wage increase, but also offering enhanced retirement benefits and health care.  The CEO looks like a genius for keeping labor rates (relatively) modest, but what he has done is put a ticking time bomb under the company.  As the years went by and more and more people retired (and lived longer) the cost of the retirement benefits and health care plans started to accelerate. Compounding this was the shrinking market share the company had.  Sort of a reverse-pyramid scheme - which is basically how GM went bankrupt.

Other countries don't have this problem - our competitors in Japan and Europe have nationalized health care and some countries even have nationalized pensions.  For some reason, in America, we have decided that employers should provide these things.  As I noted before, it makes about as much sense as laying the cost of health care and retirement on retailers when they sell you something - just a different point in the economic chain to collect money (and the VAT tax in Europe is sort of this way).

Imagine going to McDonald's and when you buy a Big Mac, a dollar is added to the bill to fund your healthcare and your retirement.  It makes about as much sense as laying this at the doorstep of employers.

Some on the Left have noted that this system has some other unintended consequences. Quit your job? Lose your health care.  It keeps employees loyal to the company, particularly in the past, when you had to work for X years to be "vested" in the company pension plan.  Many people were fired often days before being vested - or laid off, which often happened to salaried Engineers when a project wound down.  The 401(k) was an improvement in that regard, but in other aspects a disaster.  Our pension is now determined by how much we contribute and the fickle finger of fate that is the stock market.

I suspect that some corporations wouldn't mind it if we went to "National Health" and took this burden away from them.  They could hire people full time instead of part-time (the latter of which they do today, to avoid paying benefits). It is like food stamps - conservatives say they hate them, but companies like Walmart realize they are a wage subsidy which allows them to pay their employees less.  Many people pining for $15-an-hour wages (or more) are finding out a hard truth: They lose government-paid benefits if they make too much money, and thus end up swimming in place.  You get a raise, but you lose your food stamps, Obamaphone, Obamacare subsidy, Section-8 housing eligibility, and so on and so forth.

We have made this far more complicated than it needs to be.

The problem is, of course, that there are too many people in the system who don't want to change it.  The union worker with his "Cadillac" plan doesn't want to see it go away - or be taxed, as Republicans have proposed.  The insurance company which makes a little (or a lot) from each transaction, doesn't want the boat rocked either.  And the medical industry is loathe to have the government set prices for procedures, although they do this already with Medicare - and insurance companies negotiate reduced fees as well, which is why even a high-deductible plan can be worthwhile.

Just a radical thought here - maybe, just maybe, if we disconnected these benefits from employment and made them available for everyone, companies could make hiring decisions based on how many people they actually need, and less on the fixed-cost of overhead for each employee.

And maybe mandatory overtime would become a thing of the past.

Hey, who am I kidding? The insurance companies would never let that happen!