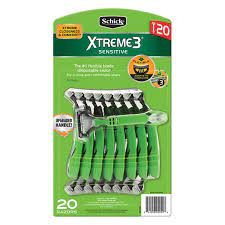 When you can buy from the manufacturer for less, why bother with Amazon?

I recently went online to buy some more Schick Xtreme disposable razors.  After forking over money for years to those Gillette bastards, I realized the best value for the dollar were these disposable razors from Schick.  Yes, the cartridges might be more environmentally friendly, but they end up costing more.

I searched online using Google and opened up a half-dozen windows from Amazon, eBay, BJ's, Sam's Club, Schick, Walgreens, CVS, Walmart, and so on.  Amazon had the 20-pack for $24.10 with free shipping.  BJ's had it for $16.99 but only at the club ($8 shipping!).  Others were more expensive - over a dollar a blade.  Once again, Amazon is the loser - easy to shop with, but the highest price.  I found a guy on eBay who sells them loose for $14, free shipping.  We'll see how that works.  I am guessing he buys them in a commercial package and then re-sells them.  Hopefully they aren't dull.

Schick had a good price, which was even better with a 20% introductory discount coupon code.  Of all the online sources, the manufacturer was the best price for packaged product.  Funny that.

But this is not the first time I have run into this.  When I bought the Bissell vacuum, the Black and Decker sawzall, the Merrill shoes, and the Wrangler jeans, the manufacturer's website was often the best price around - or very close to or equal to, other online shopping venues.  Even with "free shipping" Amazon often came in close to last or dead last, in terms of bargain prices.

Something is going on here. I think the manufacturers are realizing that they can sell directly to customers, cut out the middleman, and make a helluva lot more money than selling through Amazon or Walmart, or any wholesale club.  And in this era of shrinking margins, why not?  Traditionally, manufacturers didn't want to piss off their retailers by undercutting prices.  So if they sold directly to the public at all, it was at "manufacturer's suggested retail price" with no discounts.  There were rarely any bargains at manufacturer's sites and often the websites themselves were clunky and hard to use.  They didn't expect people to actually order from them.

But that is changing, I think, and maybe this is a good thing, maybe a bad one, depending on where you live in the retail food chain.  If you run a retail store or an online reselling business, you hate this.  As a consumer - or a manufacturer - you might love it.

Amazon, I am sure, hates it.  But I think this may be the wave of the future, as more and more 'middlemen" are cut out of the equation and more and more companies start selling direct to the consumer.  But like so much else, it is a trend that cannot be halted or reversed - although I am sure some retailers are petitioning their legislators to outlaw such things - much as car dealers have done in the past - and continue to do today.

You might as well try to fight a hurricane, though.

UPDATE:  Schick had a "gift pack" of ten razors and a can of Edge shave cream (not my favorite, I'm more of a dollar-tree Barbasol kind of guy).  The punchline?  $10.  So I ordered two - free shipping plus my 20% discount coupon.   That's less than a buck a razor if you factor in the free shave cream.

The guy on eBay delivered and while his prices were great, the handles were cheaper and lighter.  Knock-off product or an institutional bulk-packaging model?  Not sure, but they seem to work fine for well under a buck a blade.