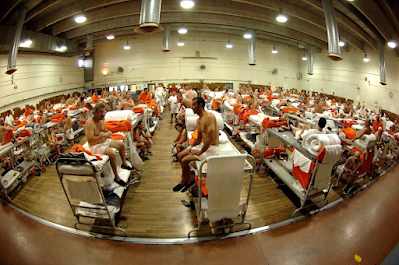 Are for-profit prisons a good idea? Maybe not!
A reader writes:

Your article on stock options is timely. Just this weekend, I was having dinner with a friend who is a prison warden for a large corporate outfit that has a contract with the State. He has been a warden for almost 10 years after working up through the ranks as a lowly correctional officer many, many years ago.
He was telling me that he has the "honor" of the most inmate deaths for the entire system for 2021...9 total of which 8 were homicides. The prison he runs has nearly 3,000 inmates and is short by over 200 correctional officers. As you might guess, there are lots of lawsuits (rightfully so) and it is costing the company a lot of money in legal fees and settlements. They start the COs at $17.00/hr whereas you can start down the road at Hobby Lobby for the same wage...but without the "customers" trying to murder you. The friend had asked to increase the starting wage to at least $18.50 to try and help the issue, but the folks on the board said nope...that will have too much of an effect on the bottom line...you can bump the wage by 35 cents. Yeah.
ANYWAY, the friend would REALLY like to quit and do something else, but guess what? Two new car loans (a fancy new Bronco...SNATCH (as you would say)) and "generous stock options" keeps him imprisoned; no pun intended. If I recall, his latest contract was for X number of shares, but only 1/3 of them vested per year...so they are worth nada until at least 365 days after his contract was signed and then only a third of the shares per year. How miserable.