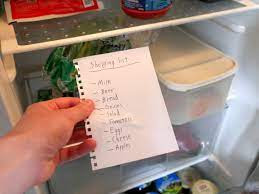 I am very fortunate to have Mr. See.  He can plan menus in his head for days at a time and then come up with a shopping list for that menu planning.  So we go to the store once or twice a week and buy what we need on the list - and not much else.  He then prepares meals, sometimes making enough for several meals, which are either frozen for later use (sometimes months later) or served as leftovers for lunch the next day or whatever.

Having a shopping list and meal planning - and making meals at home - saves a boatload of money.  Next to your rent or mortgage payment and car expenses, your food costs are probably the third highest part of your budget.  And if you eat at restaurants all the time, probably the second-highest part.  It may not seem intuitive, but if you use restaurants or take out or delivery services for more than half your meals (which is typical of so many Americans) it is enough money to make the payments on a nice car.

Yet so many complain about being broke.

I used to shop and eat that way - spending $5 on lunch at a job that paid $4.25 an hour.  Two hours of work, just to pay for lunch.  Add in the commuting costs and taxes, and I'm not making a dollar until about 2:00 in the afternoon.  Stupid!  Yet we all do it - or did it at one time in our lives.

I used to go to the grocery store, when I was single, without any kind of shopping list.  Like so many Americans, I would buy whatever flashy thing was on the end-cap display or "on sale!" or had colorful packaging or looked tasty.   And I never looked at prices too closely.  I wondered why I was broke all the time.

In my last year of college, I took a leave of absence from Carrier and was working nights at UPS for extra dough.  Every payday, I would pay all the bills and then fill the tank on the car and then go grocery shopping - with a list!  I would buy a big bag of rice, and some white bread and peanut butter.  Peanut butter and jelly sandwiches was my lunch for the week, with a box of raisins and maybe a boiled egg or something.  I put aside enough portions for each meal and had just enough to get by.  If I "snacked" on something one night, that meant no meal the next day.  Needless to say, I lost a lot of weight then.

It sounds rather harsh, but it was a time of contentment for me.  I realized I didn't need a lot of money to live on, and could get by with what I was making - and that I was doing pretty well.  I was, of course, finishing my Engineering degree, which gave me hope that eventually I would find a better job that paid more.  But I learned some habits of frugality then - habits I would forget and re-learn over the next 30 years or so.

A shopping list is essential for two reasons.  First, it is stupid to drive to the grocery store and "forget" to buy something you need - and then later pay three times as much for the same item at a "convenience" store.  Second, the shopping list helps you to focus on what you need and not flashy end-cap displays and "specials" designed to get you to impulse-buy things.

Without a shopping list, your entire cart becomes impulse-buys.  And we see this all the time - the fellow with a cart full of two-liter bottles of orange pop (on sale!) and big bags of chips (ditto).   I am never sure what people like that are thinking - this is a healthy meal?  Or do they just continuously graze-snack all day long?   We wonder why we have an obesity and diabetes epidemic in our country, too.

To some folks, that doesn't sound like "fun" - having to make lists and watching your dollars.  Why not eat in a restaurant?  That's fun, right?  You get to boss around some waitress and be catered to and waited on and pandered.  But again, the idea of inaction being the ideal is an irrational idea.  Satisfaction in life comes not from "kicking back" but from accomplishing things.   This is why the Sad Sacks and problem employees are never happy in life - they think that shortcuts to happiness are the way to go, but real satisfaction comes from accomplishing things, not from wallowing in excess.  I guess that is why lottery winners are never happy, either.

If you think about it, it makes sense, too.  Our brains are programmed to give us dopamine when we do things that improve our lives.  It is a basic survival skill.  You get satisfaction from building shelter, making clothing, planting a crop, hunting an animal - basic survival skills of our ancestors.  Of course, we also get the same satisfaction from hobbies and projects, from completing a task at work, or paying off a debt.  Modern equivalents of what our ancestors did.

Someone asked me recently if I was happy at this stage in my life.  "Better than that," I replied, "I am content.  Contentment is so much better than happiness!" So many unhappy people in the world seek happiness and eschew contentment and it is not hard to figure out why.  The media hypes ecstatic happiness as the goal for anyone in life.  You want that Disney Vacation, where every moment is a continuous orgasm.  You want that sweet sody-pop and ice cream, not some savory vegetable medley.  Seeking happiness often leads to unhappiness, as when the happiness wears off (as it always does) it leads to depression.  Contentment, on the other hand, is a steady-state of mild pleasure - far better than the ups-and-downs of happiness and depression.

It is, in a way, why we have a drug problem in America.  People seek out that "high" from drugs and assume that that is the norm of emotional feeling.  When they come down, they are twice as depressed as before - and seek out more drugs.  It is like the day after you drop acid - everything seems stultifyingly boring - as if God hands out so much pleasure in the world, and you've overdrawn your account.

Stupid things like making a shopping list and balancing your accounts every day may not seem "exciting" but there is a continual level of contentment and pleasure from knowing that your life is stable and you are secure.  Living "paycheck to paycheck" on the other hand - and never balancing your accounts, checking prices at the grocery store, or paying down your debts - is the most stressful way to live, even if it means you have more electronic toys and eye-candy parked in your driveway.

I know it sounds stupid, but happiness contentment in life isn't from grand things and big spending or huge salaries. It comes from little stupid things - like having a shopping list.