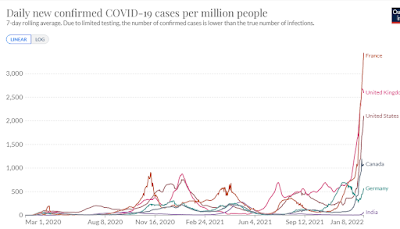 Spreading fear about the vaccine isn't helping - and it enables anti-vaxxers!

I told her to stop spreading FUD - Fear, Uncertainty, and Doubt.

She went on to say, "Well, some people can't take the vaccine due to medical conditions!  I nearly had a reaction to it myself!"  Nearly had?  I am not even sure what that means.  I replied that there may be a tiny, tiny minority of people who could not take the vaccine, but that is not the issue.  The issue is the small but vocal minority who are refusing the vaccine because "I read something on the Internet and have questions about it!"   These are the folks who are clogging the ER and the ICU and driving the ICU nurses insane - working double shifts to fruitlessly try to save the lives of people who had a preventable illness.

You can't blame the nurses for quitting - in droves.  And this affects all of us, too.  People are sitting in the ER with appendicitis and waiting for their appendix to burst before they are admitted, because some selfish bastard decided to listen to Candice Owens instead of a doctor.  Any illness that isn't immediately life-threatening is pushed to the back of the bus.  Surgeries that are not life-saving are "elective" and people have to live in pain and wait - months, perhaps years? - before the hospitals are cleared of these CoVid cases.

She went right down the list - all the Fox News Talking Points (and she claimed she doesn't watch Fox News, "that much").   "The statistics are all skewed!" she said, "Not that many people are dying of CoVid - they are just putting that down as a cause of death if you had it when you died!  If you had a heart attack and died from that, and tested positive for CoVid, they count that!"  And of course, she is getting this from Fox News and The Bureau of Specious Statistics.  Oh, and by the way, CoVid can give you a heart attack as it clots up your veins.

She didn't stop there.  "We need more treatment!  More Remdisivere!"   But why treat an illness when it is already ravaging your body, when you could prevent it, in most cases, with a simple vaccine?  It is like not changing the oil on your car but rebuilding the engine, instead, after it seizes.  And by the way, even if you are "cured" of CoVid, it can ravage your organs to the point where the rest of your life (which may be severely shortened) is not very pleasant.  The body can only grow back so much!

"We should have had better masks!" she said, "more contact tracing!"   I pointed out to her that contract tracing was staggeringly expensive an ineffective.  If someone tested positive for CoVid and had been to a baseball game the day before - or at WalMart or whatever - it would be nearly impossible to "trace" all the people he may have coughed and sneezed upon in that time period.  Contact tracing was tried - a lot of money was thrown at it - and it didn't accomplish much.  We tried contact tracing with HIV and the result was about the same, particularly for people having anonymous sex.  Prevention turned out to be the correct answer, whether it was using a condom or using a mask - and social distancing.

Oh, then it got worse.  She tried the old, "It's no worse than the flu!  More people have been killed by the flu than CoVid!" - which may be true, if you count flu deaths over the last 10 years. - or more.  And guess what?  They have a vaccine for the flu, too!  But yea, she "almost had a reaction" to that as well.  Sheesh!

According to Johns Hopkins, cited above, 290,000 to 650,000 people die of the flu worldwide every year.  In the US alone, we are over 800,000 CoVid deaths in a little under two years.  That's more deaths in two years in just the USA than in one year, worldwide, due to flu.  There have been almost six million deaths worldwide, due to CoVid, which is 5-10 times the death rate of the flu.

What is really scary, though, is the chart above - the infection rate in the last two weeks has shot straight up.  Shit's about to get serious.

Sadly, the same voices who are raising all this FUD are the same folks decrying mask mandates, even in private businesses.  These are the bullies who are literally shooting people in retail stores when they ask them to wear a mask.  What the ever-loving fuck happened to this country?  The world?

What made me angry is that this "nice old lady" had gotten her vaccines, but she was spreading this misinformation as well as doubt about the vaccine.  And that's all some people need to justify not getting vaccinated.  "Well, Aunt Edna raised some good points!  And Candice Owens says we shouldn't get the vaccine!  That settles it for me!"

The problem with these narratives is that is takes a nugget of truth, wraps it in some misrepresentations, and then dips it in some outright lies, to create this bon-bon of unwarranted fear and uncertainty.

And this shit is getting serious - far to serious to put up with this bullshit anymore.

As the above chart illustrates, the infection rate, worldwide, has skyrocketed in recent days - to levels several times higher than the previous "peaks" of the pandemic.  Granted, most of these are the Omicron variety, which, so far, appears not to be as lethal.  On the other hand, the death rate has ticked up, to near-peak levels, and continues to rise.   The death rate may not have skyrocketed just yet, but the infection spike is only a few weeks old - wait for it.  Already the death rate is near the previous peaks, where ICUs were overwhelmed.

This was all preventable - if people has just worn masks, gotten vaccinated, and practiced social distancing.  But no, we had to have a few loudmouths decry the entire thing and try to bully people into being unsafe.  Even their demi-God Trump told them to get the vaccine - at which point they turned on him.  These folks have lost their minds.  These are nutjobs, plain and simple.  And yet the rest of us, who think rationally, are told to "shut up" because they're entitled to their opinion.

And apparently they're entitled to all the ICE beds as well.  I just pray that I don't have any serious illness or accident in the next 18 months or so.  Meanwhile, the folks who are not so lucky have to fight for space in the hospital with folks who are infected with a preventable infectious disease.

Those are the folks I feel sorry for - that and the medical professionals who are overworked and in many cases, underpaid, and facing abuse and even violence from family members of the deceased who insist their loved ones should have been given horse medicine.  They are literally accusing doctors of murder and it is only a matter of time before one of these "patriots" shoots up the ICU with his second amendment rights.

Mr. See had the right idea.  Set up a tent in the parking lot of the hospital.  Staff it with "nurses" who refused to get vaccinated.  Treat these losers with Ivermectin, while at the same time measuring them up for a coffin.  If they want alternative medicine, then give it to 'em!  Why waste valuable medical resources on people who don't believe in medicine?

But that would be a little harsh, I guess.  Maybe that is the only way this will end - when every anti-vaxxer gets sick and dies or realizes this isn't a "hoax".   But I doubt that will even happen - already these idiots are saying the whole thing is a conspiracy to kill off Qanonsense and Trump supporters, not with the virus, but in hospitals.

They are also claiming (inexplicably) that the vaccine will kill off millions of people (again, made-up bullshit) but don't explain exactly why the government wants to kill 95% of the population.  Some are already arguing that the vaccine has killed more people than the virus - and as proof of this, they cite....nothing.   Surely, "Cyber-Ninjas" are on the case!

It is just bizarre madness and it has to stop.  But it isn't going to, anytime soon. These folks keep doubling down their bets - getting sicker and sicker and dying in greater numbers.  They are abandoning jobs, careers, and families, just to "own the libs" and pledge their fealty to Trump or "Q" or whatever.  It makes no sense, and that's the problem - you can't cure unreason with reason

That being said, I am so, so disappointed that an otherwise intelligent person would be spreading vaccine FUD.  All it takes is a little doubt or uncertainty and the whole thing unravels.