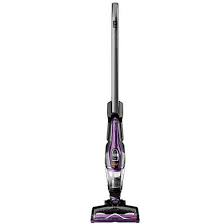 Expensive vacuum cleaners don't necessarily work better, and in fact, an inexpensive and easy-to-use model is handier.  This Bissel 2482 was free - a neighbor was throwing it away because it was clogged!

We are still in love with our Bissell 1984 vacuum cleaner.  Why?  It is small and lightweight, cost under $250, runs on lithium-ion batteries and thus has no cord, and its low profile means it fits under the bed - all the way to the center!  Since it is so easy to "grab and go" we end up vacuuming more.

The old-style expensive huge vacuum was always a PITA to get out, plug in, and use.  So vacuuming became a once-in-a-while thing, instead of a many times a week thing.  A reader writes, asking me about a review of a Dyson vacuum which was variously called "The Beast" or "The Animal".  It was a huge, heavy thing, corded of course, and had a vacuum apparatus that looked like the prototype Whittle Jet Engine - which is appropriate as the Dyson people are Bri'ish.   And as we know, Americans will buy anything sold to us by a dude with a British accent.  We endured decades of pain due to Lucas electronics as a result.  British cars! [shivers].

I don't need or want a closet-monster vacuum that is impossible to store, heavy as fuck, and a PITA to use and unable to vacuum under furniture.  And no,  I don't want a robotic vacuum just yet - maybe someday.  Small, lightweight, inexpensive vacuums without cords are much easier to use, in my opinion.

But this got me to thinking and I realized I own five Bissell vacuum cleaners now.  In addition to the 1984, we have an old corded bag model 1398 that we bought many years ago at Walmart (for under $50) which we now use for vacuuming out the fireplace.  We also have a bagless cyclone unit (similar to the 1009) that a friend gave to us when they sold their 5th wheel trailer.  We use it at the storage locker where we keep the camper.  Eventually, it may go out to Mark's Studio when the old GE canister vac finally throws in the towel (clay dust is hard on vacuum cleaners).  We also have a hand-held "auto" vacuum model 61CR19/66 which is handy for spot jobs like window sills and (oddly enough) autos.  We used it in the camper as well. (We also have a RIGID portable shop vac, so with the two aging GE's that makes eight vacuum cleaners, I guess).

A neighbor was throwing away a model 2482, which is sort of like a dustbuster mounted on a stick.   I snagged it because (a) it was a Bissell and (b) it said "lithium ion" on the front, so odds are, the battery was good, and (c) it could be perfect for the camper, as it was small and folded up for storage.  I ordered the accessory crevice and upholstery tool from the Bissell site (their prices are about the same as eBay or Amazon) and downloaded the user manual.  I took it apart and realized why they threw it away.  The filter had never been cleaned and there was a wad of paper in the intake tube, which then clogged up with animal hair.  A half-hour of cleaning and reassembly and we were back in business.  The previous owners were nice enough to give me the charger plug! 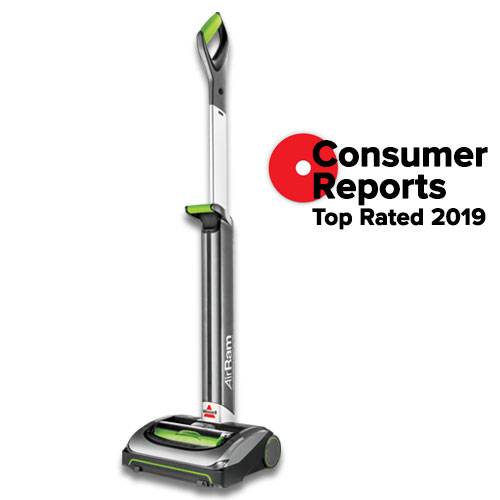 The Bissell 1984  Size isn't everything!

Bissell, of course, made its bread-and-butter on carpet sweepers back in the day, and indeed, they still sell them. In terms of suction power, maybe the jet-engine mounted on the Dyson takes the blue riband, but in terms of convenience of use, the Bissell wins hands-down.  Turns out that vacuum suction power is nice and all, but if it is a pain-in-the-ass to use a vacuum cleaner, then you are not incentivized to use it.  The Bissell 1984 is fun to use so we use it more. It isn't a chore to get it out and use it, and after each use, I empty the removable cartridge, clean the foam filter (machine washable) and disassemble the cartridge and clean it in the laundry room sink.  Since I have a spare cartridge (hint), I can put that back in the machine while the other one is drying.  The battery lasts long enough to vacuum the whole house, twice and recharges in a few hours.

The cord thing seals the deal, though.  With the old school vacuums, you vacuum until you run out of cord.  Then you have to walk back and bend over and unplug and them walk "upstream" to where you are going to vacuum, and find a new outlet. Repeat.  It disrupts the flow.  Sure, you can yank the cord out like our cleaning lady used to do, but that breaks the plug over time.  Lithium-Ion batteries are the wave of the future.  Maybe they won't generate as much suction as a plug-in vac, but they work pretty darn well.

Maybe the Dyson people got so caught up in the suction wars that they forgot what vacuuming is all about. Suction is fine and all, but quite frankly, too much is worse than "just enough" as powerful vacuums will suck up rug fringes and draw in extension cords.  Let's face it - the beater bar is doing half the work.  Once that stirs up the dust and dirt, it doesn't take much vacuum to draw it into the machine.

This is not to say the Bissell vacuums are weak - far from it.  A huge and heavy corded vac with a turbine the size of a small garbage pail is bound to generate more vacuum - but to what end?  The Dyson "Animal" isn't going to vacuum under my bed.  And guess where I need to vacuum the most?  Yup, under the bed.

A hint:  When you change your sheets, take time to vacuum the mattress.  You'd be surprised what you find - a low of a fine whitish-grey powder.  Like most dust, that's your dead skin.  Yes, we as humans leave behind us a cloud of dead skin cells wherever we walk, sit, stand, or lie down.  We shed like dogs, but it is much harder to see our sheddings.  And lets not even talk about the mites that live in our eyelashes and even on our beds, eating those dead skin cells.  Yes, I know, disgusting.  The human body is a pretty messy machine.

Another hint: shower before bed, not first thing in the morning.  Your sheets will stay cleaner and there will be less dead skin shedding in the bed.  But I digress.

I think the point is, as humans we think that we can "fix" the world by spending more and more money, applying more power, and making things more complicated.  Maybe the heavy-duty vacuum cleaner is a neat thing, but at $500 retail (what I saw online) I am not sure it is a better deal.  That's more than we spent on the eight vacuum cleaners we presently own.  And when expensive things break - which they all do, eventually, the heartbreak is all that much worse.  Ask the guy who owned five BMWs.  It is so much less stress to pay less and be able to afford to "walk away" from a piece of technology when it breaks or becomes obsolete - something that every piece of technology eventually does.

Well, so far, none of the Bissell vacuums have broken or become obsolete.  So maybe that says something as well.