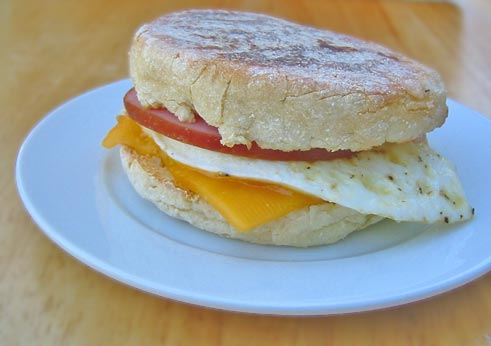 Is the egg sandwich going to kill you?  No, it is not.  Unless you eat five of them at a time.
What is GARBAGE SCIENCE?  It is scientific "studies" performed by people who are usually not scientists, usually have an axe to grind going into the study, and intentionally skew the study to produce the results they wanted in the first place.
MSNBC (they want to call it NBC, but it is more like BS-NBC) recently posted an article citing a "study" which they claim says a breakfast sandwich is bad for you.  Oh, boy!  Better go back to oatmeal, right?
Not exactly.  You see, they had the test subjects eat TWO breakfast sandwiches a day, for a total breakfast calorie count of 900 calories.  Yes, that is a LOT - about half your daily requirement, in one meal.  It is overeating, period, and yes, overeating is unhealthy.  Act shocked.

"Researchers in Canada measured the blood vessel function of a group of college students on two separate occasions: once on a day they had no breakfast, and once after they consumed two fast-food breakfast sandwiches that clocked about 900 calories and 50 grams of fat total."

This is GARBAGE SCIENCE or Pseudo-Science at its WORST!
Eating TWO BREAKFAST SANDWICHES? That is ridiculous. One is just fine for you.  They  intentionally SKEWED the data by having the subjects OVEREAT. 900 calories is a HALF-DAY's supply!
Their suggestion?  Eat an egg and avocado sandwich instead - it's "Healthier" they say.
Avocados? 276 Calories and 28 grams of fat. Bet you didn't see that one coming!
One of their other alternative suggestions is a  "peanut butter and banana sandwich" which they claim is:

"a delicious, indulgent treat that's actually...good for you? This healthy sandwich clocks fewer than 400 calories and has protein and good-fat-right peanut butter, potassium-packing banana, and a good amount of fiber, too."

OK, let me get this straight.  A 400-calorie peanut butter and carbohydrate sandwich is good for you, but a 400-calorie egg and cheese sandwich is bad?
Right. No wait, it isn't. 400 calories is 400 calories. And the banana sandwich has twice the carbohydrates of the egg sandwich, perhaps more.   A huge dose of fructose, right in the morning.
400 calories is 400 calories.   So to make this "study" work, they skew it by DOUBLING the intake of the subjects to 900 calories.
Have you ever tried to eat TWO fried-egg sandwiches in the morning?  You'd have to force yourself to do it.  It would be gross overeating.
This isn't just bad science, it isn't science at all!
MSNBC needs to remove this article, or at least re-title it, "Poorly done survey concludes that eating too much is bad for you".
Shame, Shame, Shame!
It is GARBAGE SCIENCE like this that makes people ignore REAL WARNINGS about food and drink.  That is the real danger about "studies" like this - people get used to hearing warnings that later turn out to be fabricated, exaggerated, or overstated.   And pretty soon, people say, "They scientists don't know nothing!" - and they go back to their 44-ounce big gulps.
Congratulations FAKE SCIENTISTS, you've just given everyone a validation of their poor eating habits!
The media!  Oy!
Newer Post Older Post Home
View mobile version