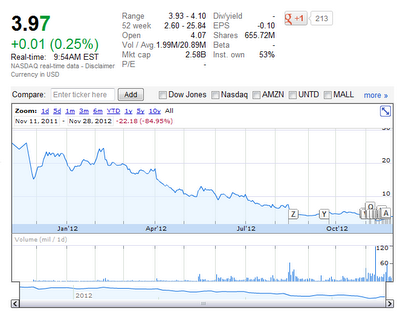 You don't have to be Warren Buffet to call Groupon as a hyped stock.   And as I predicted, it pretty much has tanked and likely will stay tanked for a good long time.


Groupon is in the news again, and not in a good way.  The CEO is likely to be asked to step down.  The share price is in the toilet, there have been questions about accounting practices, you know, the usual shit.

And I called this when it went public, a year ago.   Groupon was a fad that was fading fast.  It had no protect-able business plan - anyone could start a similar site, and did.  And its model for making money made no sense - for the business, the customers, and the consumers.

And already, its pervasive and disturbing ads are disappearing from the Internet.  You just don't see Groupon ads anymore.   One day, it seems it was everywhere - discussed on the financial news channels, talked about with your friends, and then..... nothing.

And maybe if you were foolish enough to believe the hype, you bought the stock at $20 a share or more, and are wondering "where all the money went".  And if you are a raging true believer, maybe you think it will "come back" and are hanging on to it.

This sort of thing happens all the time.  The News is the worst place to get investment advice.  Why?  Because as I noted before, only sudden events are deemed newsworthy.   Hitler invades Poland - that makes headlines.   Hitler slowly accumulates power over a ten-year period?  That barely makes Page 2.

Or take the housing market.  The bubble bursting makes headlines.  The buildup and the warnings of the bubble bursting?  Maybe a human interest story on the inside page of the Real Estate section, qualified with a "well, you never know what will happen" kind of thing.  Sort of the same way the news waffled about Hitler at the time.

Whatever is "in the news" at a given moment is probably a bad bet.   You can just count on that.

And I know this because when I was younger, I foolishly bought Martha Stewart's stock, Martha Stewart Omnimedia.  I recently rented the movie Martha Stewart, Inc. on Netflix.  And brought back to me all the fact surrounding that case.   Martha knew all about stock manipulation, as she was a former broker, who hyped Levitz Furniture stock, which bubbled and burst, and was the subject of an investigation and, well, Martha had to find a new job after that.

And in retrospect, the idea that a "Media Empire" made out of a cooking show and a magazine could be worth a Billion dollars is kind of idiotic.   Was it worth something?  Yes.  But not a Billion.   And as some pointed out, the entire brand was based on one person, and if that one person was missing from the picture (for example, disgraced and in jail) then the entire media empire could collapse.

I made the mistake of buying a stock I didn't understand.   What I was buying was a minority share in a company, whose only assets were basically intellectual property - much like Groupon and Facebook.  And it was a fad, to some extent, that was already being bashed by the time the stock was offered.   But I confused popularity with substance - a name mentioned often in the media with success and profitability.  The two are not the same.

(By the way, MSO is still around, but is hemorrhaging cash, just like Groupon.  Companies cannot stay in business for long with negative earnings.)

So, when the Groupon IPO came out, I saw the writing on the wall.   Ditto for ZipCar and Facebook.   Highly touted companies that get a lot of mention in the media, but have no real money-making plan, or at least not one to justify the sky-high stock prices.

And yea, on page 2, there is a waffling piece where they quote some crank like me saying it is a lousy deal, which they qualify with a "well, you never know!  Only time will tell!" kind of ending.

Recently, two stocks have gotten a lot of mention in the press.  The first is Green Mountain Coffee, which shot up 25% for no apparent reason.  This stock was the darling of the press for a while, too.  Since their Keurig coffee makers are no doubt in the break rooms of the media conglomerates, the writers thought, "Gee, maybe the company that makes this is a good bet!"   And that is why they tout iPhones, too.  Whatever is on the desk of the person writing articles for CNNMoney ends up being a good buy.

But, alas, there was some financial tomfoolery about, and some questioned their financial accounting.  The Chairman was forced to step down when it turned out that he was leveraging his shared on stock options.  Like Martha and Zuckerberg, he had a lot of wealth - on paper - but no real cash.   Market Cap may sound fantastic, but when you try to cash it in, it evaporates like ether.

Why Green Mountain would shoot up in value by 25% is anyone's guess.  But if you invest in this company (or invested in it) based on the news reports of the day, chances are you will lose your shirt.  At least the company is earning money - that is if you believe their accounting practices, which have been called into question in the past.

Another example of hyped investing is the recent little scam involving ICOA, a tiny, money-losing wireless provider from Rhode Island (the only State owned outright by the Mafia) which has been trading on the "pink slips" penny stocks market.  This company was de-listed from the NASDAQ and at 0.0001 per share, you can see why.

A press release mysteriously appeared on prweb.com saying that Google had agreed to pay $400 Million for the company.  The current market cap is $848,000 - less than a million bucks.  It was a classic penny stock pump-n-dump - the sort of thing made famous by a high school kid in New Jersey, who found that suckers - Raging True Believers - would buy any stock if you just sent out an e-mail saying that it was poised to go wild.

The true believers never bothered to ask why someone would anonymously just tell them this, but instead went out and bought the stock, watched it go up, and then crash hard.  No one lost a lot of money this way, just a little bit.  But whoever put up that fake Press Release no doubt raked in thousands, tens of thousands and maybe hundreds of thousands of dollars.

It is a scam, of course, and an obvious one.   But ask yourself this - in what way is it different from Groupon, Facebook, ZipCar, Martha Stewart Omnimedia, Green Mountain Coffee, or a whole host of other hyped companies that skyrocket in price and then crash to the ground?

And the answer is, it isn't.  The only difference is that in most cases, the big companies you read about and invest in are never charged with doing anything "illegal" in most cases (Even Martha Stewart, who was arrested and sent to jail, was not prosecuted for anything related to her own company).

Hyped stocks are never a good idea.  And the best way to avoid hyped stocks is to stop watching the financial channels, stop listening to the shouting guy, and stop being a Raging True Believer.   There is no "secret" to investing, losing weight, or living.  There is no "insider" who is going to let you in on the "real deal".

Just walk away from that mentality altogether.