The Townie (How Not to Ride a Bike) 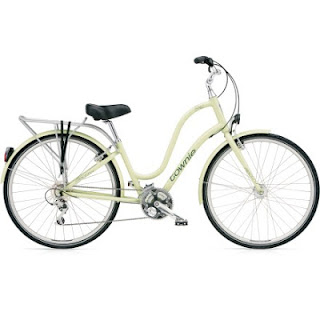 The "Townie" bicycle sacrifices efficiency for alleged comfort.   Most folks I know who ride them, don't ride them very often.  It turns out that efficiency IS comfort.


Many folks here on retirement island buy these "townie" bicycles, as they feel that a traditional bicycle is "uncomfortable".   A "Townie" (brand name) bicycle has a stretched frame and the pedal crank moved forward of the seat tube, which itself is raked back.   This feels "comfortable" when you are sitting on it in the showroom, as your feet will touch the floor - flat.  But when you are riding it, your legs end up out in front of you, as if you were pumping a church organ.

Traditional bicycles put the pedals beneath the seat post, in a direct straight line.   A mountain bike such as the one shown below, is an example of this. 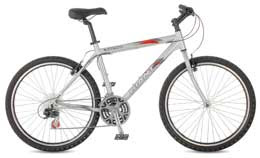 Traditional bikes put the pedals under you, not out in front of you!

This positioning is far more effective that the laid-back style of the townie.  When you press down on the pedals on a traditional bike, you press straight down, with all of your body weight to push against it. With the Townie, you are pumping a church organ, and have nothing to push off against.   Efficiency is horrific, which is why many folks buy these bikes, try to pedal them a few yards, get exhausted, and then give up.   Another expensive piece of junk cluttering up the garage.

A traditional bike allows you to push straight down, which is efficient, as your body weight is behind each thrust.   Many folks find this uncomfortable, and mostly because they have not adjusted the seat properly.  And believe it or not, most folks really cannot ride a bicycle.

When you are seated on your bicycle, your legs should extend nearly all the way when the pedal is at the bottom of travel.  Adjust the seat up HIGH (like the picture of the mountain bike above) to achieve this setting.  Don't hyper-extend your knee joints, however, as this will cause knee problems.

Most folks leave the seat way down low, as they want to be able to "put their feet out" and touch the ground.  They are worried about tipping over all the time (because they don't know how to ride, really) so they end up very uncomfortable, which makes them less likely to ride and also gives them less control and horrific efficiency.

I've seen some folks with the seat all the way at the bottom of the seat post.  When they pedal, their kneecaps are banging against their nipples.  It looks awkward and uncomfortable, because it IS.   And since they are not making effective power, they are steering from side to side and barely moving.    No wonder they are so worried about "tipping over" all the time!   Because they DO!

Most folks also pedal in the wrong gear - too high a gear.  My neighbor saw me riding the other day and asked, "Why are you always in such a low gear?"   Of course, I was in the right gear, maintaining a cadence of 70-100 strokes a minute, sometimes higher.  Many folks plod along at a 30 rpm cadance, and wonder why riding a bicycle is so "hard" and why their knees hurt.  They wobble from side to side, sawing wildly at the handlebars.

A slower cadence might initially seem more comfortable.  However, in order to make any power, you have to place a lot of stress on your leg muscles and knee joint.  A faster cadence means more strokes, but less power (and pressure) for each stroke.   Your knees will thank you for that - and thank you for adjusting the seat post height properly.

A faster cadence also means smoother riding - at a stable speed, not this "about to tip over, sawing at the handle bars, hardly faster than walking" nonsense.  And yes, I see people doing this on expensive "road bikes" - having been sold the Lance Armstrong Starter-Kit by the guy at the local bike shop (sponsored jersey, gel shorts, biking shoes, and racing helmet included.  Steroids are extra).  They have all the right gear, but they don't even have their seat adjusted properly.  They plod along like a child on a tricycle.   It is freaking embarrassing to look at.

But what about when you stop?   So many people are scared to death that when they stop, they will be so "up high" on their properly adjusted seat, that they will "tip over".   The key is, of course, that when you stop, you should get off the seat, stand on one pedal, and then lower your other foot to the ground.   It isn't hard to do, even with toe clips.

Bicycling is a lot of fun.  Unfortunately, I see a lot of folks go out and buy bicycles and have all the best intentions of riding them.  But they buy the wrong kind of bike, such as a Townie - based on comfort, not pedaling efficiency - and they adjust the seat poorly and then pedal too slowly.  Very quickly they are tired out and have little control over the machine.  They end up getting frustrated and giving up.  Another $250 squandered on the credit card, and yet one more piece of junk keeping them from parking their car in the garage.

Just say "no" to Townies!   And raise your seat up, for chrissakes!  You look ridiculous!
Newer Post Older Post Home
View mobile version