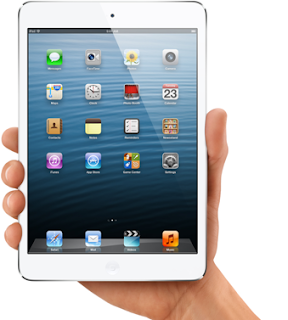 The new iPad mini is out.   I'm holding out for the iPad Nano, which has a screen the size of a postage stamp and makes a great gift for the people who build your yacht.

People are getting i-fatigue.  You bought an iPod, then a mini, and then a shuffle.  You bought an iPhone, and then upgraded, twice.  Then the iPad came out, you bought that.  Now another pad, slightly smaller?   You've had enough i-spending on i-junk.  And we won't even talk about how much you spend on "apps" which do little more than market to you.

Are people getting i-Fatigue?  I think so.  Apple is mum on the details, but pre-orders for the iPad mini were not as high as expected.  And the lines around the block are, well, not around the block.  In fact, there are no lines.

What is going on?  And what does this mean for Apple?  Simply stated, the market for smart phones and pads is rapidly saturating.   Smartphone penetration is now above 50%, with about 60% of that market going to Android and 30% going to Apple.  Yes, you read that right - Android has trounced Apple, and the rate of growth in market share is twice Apple's as well.   Why is this?

Incremental sales in the smartphone and pad markets are going to be the new customers - who currently don't have a smart phone or a pad device, because they likely don't want one, or think they are too expensive and not worth it.  You know, people like me - maybe you, too.

To nail these customers, you need a cheaper product with a low-cost subscription rate.  And Apple is not well situated to do this, as they have a huge profit margin to maintain, lest their almighty share price drop.  Right now, for the first time in decades, Apple is hugely profitable, as it has some products that people will pay a premium for.   But how long can that really last?  When it comes down to aesthetics versus cost, cost usually wins.

This is why the Android has twice the market share (60% versus 30%) of Apple and is growing at twice the rate.   The people in the media don't get this (an MSNBC story the other day described Apple's iOS as "dominating" the market, when in fact, it has a minority of the market).

The i-faithful will eventually tire of continually upgrading existing products and buying new ones.  An Apple Television?  I guess so.   But part of the problem also is that Apple is trying to limit your software selections (apps, content, etc.) to their iStore.   It is like AOL, and you know how well that worked out.

My prediction is that in five years, the iPhone and iPad will be in the same place the iMac is right now - a niche product that sells well to people who value style and status, over substance.

Read the reviews of the new iPad mini sometime - more effusing over the aluminum case and the "feel" of the device.  Very little on the functionality and the cost/benefit analysis.  When you are a tech reviewer for a media corporation, you don't actually have to PAY for these things like us plebes do.   And thus the media misses the point, most of the time.

Now some of the Apple faithful argue that the "quality" of an Apple product makes the extra price worthwhile, as the plastic-cased Android products are "disposable".   But I think this is false logic.  Electronics are obsolete long before they wear out.  And Apple's are arguably the worst of the lot - the iPhone is now on, what, a fifth generation already?  Who out there is still using a first-generation iPhone with a black case?  Tacky, tacky!

So making electronics expensive and of "high quality" (and I would dispute that, with Apple, based on the reports from friends of mine who have Apple products) is pointless.  It is like buying a built-in navigation system in your car.  It is obsolete in two years, but the car may soldier for ten or twenty.  Paying a lot extra for "quality" in something you will throw away in three years because it is slow, incompatible, or obsolete (or in the case of Apple products, no longer stylish) makes no sense.

Apple has made a lot of money in recent years by coming up with "the next big thing!!" every few months to a year, and selling these items to the Apple faithful.   And they have been hitting it out of the ballpark, with the iPhone and iPad.   But ironically, that is the problem with their business model - it is predicated on one hit product after another.   It is their success and their Achilles' heel at the same time.

Markets mature and sales taper off.   The smart phone market is saturated, and growth will slow - it is a mathematical certainty, just as the number of Facebook users has to reach a plateau, eventually (if not already there).

When this happens, the huge profits will pare down to reasonable ones, as the smartphone market matures and it becomes a business of margins - much as the computer market did before then (when Apple lost its way, and they fired Jobs back in the 1980's.  Yes the "genius" Steve Jobs was once booted from Apple back in the day, because management thought he was a moron.   So much for the legend).

When profits decline, this will bring the share price of Apple down, and people will say "what happened?" when in fact, it was a predictable outcome. The same thing happened with the original Mac.  It was big hit with the Apple faithful and then.... nothing.   Sales stalled as they were unable to grow their client base beyond "people who can't cope with DOS".   So the company stagnated.  Technology goes in cycles like this, always.   Ask the people at the Wright Brothers factory.  Being first to market often means being last in the marketplace, once the dust settles.

While the iPhone is a hit product for Apple, again, it has half the market share of Android, and combined, the two have only half the cell phone market.   The media breathlessly reports every move of Apple, as it is a trendy company, has trendy products, and has a trendy stock.  And people in the media, who are the sons and daughters of the "afraid of DOS" crowd, use Apple products and just assume that the rest of the country does as well.   This tends to overstate the importance of Apple, its market share (again, MSNBC calling it "Dominant" when it is half that of Droid), and Steve Jobs - who is talked about in hushed tones as if he actually invented these things.

But then again, a liberal arts major writing for CNN really has no idea how Engineering works.   If they've even been to an Engineering company, all they did was see some gee-whiz demonstrations designed to impress the press.  They don't really get a feel for it, or how products are created and developed.

The hard reality of Apple, as I see it, though, is iFatigue.  People will get tired of spending hundreds of dollars for jewel-like electronic toys, and eventually stop buying.   Conquest sales will require lowering prices - and lowering profit margins (remember the fiasco with the original iPhone when they cut the price in half?  That pissed people off, and will do so in the future).   Their marketing model is just not sustainable and will hit a growth wall - it is mathematically certain.

(As an aside, this is the same problem for BMW, which makes jewel-like cars that cost twice what the competition is selling.   People eventually get tired of paying $60,000 for a car that lasts as long as a $30,000 car.  And to increase market share, they have to offer less expensive cars, which would kill their profit margin - the highest of any car company on the planet - and piss off the folks who paid top dollar for their products.  You can sell high-priced products as a niche player, but eventually your market penetration stalls).

Even Facebook recognized this mathematical inevitability in their prospectus - that you can't sign everyone on the planet up for Facebook, and eventually, you will sign up everyone you can, and then growth will stall, and then go flat.   It can't just grow exponentially forever - that would be a pyramid scheme.  The folks at Facebook were honest enough to admit that it was a mathematical certainty that growth would stall.

And the same thing will happen to Apple.   The market will be saturated and you can only sell so many "upgrades" before people say "enough already" as they did to Microsoft when Windows 95 came out.   After a while, the "latest and greatest" seems less than great, and you start to think, "Maybe I'll skip an upgrade, as this latest version seems incremental at best".

When that happens, Apple will continue to be profitable, but the P/E ratio will go up, and the share price go down...   Act shocked when it happens.
Newer Post Older Post Home
View mobile version