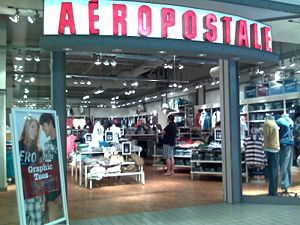 Like Banana Republic, Chess King, Benetton, Abercrombie, and a host of others, Aeropostale sprang up suddenly, like daisies after a spring rainstorm - and now seems just as likely to disappear altogether.

I knew that Aeropostale wasn't long for this world, when a friend of ours gave us an Aeropostale hat she had bought at a garage sale for 10 cents.   The fact the seller felt it was of so little value was one thing.   The fact that a 50-something man is now wearing it, says another.

Aeropostale is one of those mall stores that sells overpriced Chinese-made clothing to clueless teenagers, for staggering sums of money.  Clothing items that cost only a few cents to make are sold for tens of dollars.   And teens feel they "have to have" one of these shirts or hats, or else they will be ostracized by their peers.

Teenagers are idiots of the first order, of course.

So, now the bloom is off the rose for Aeropostale, another clothing company that is subject to the fickle fate of teen fashions and fads.    You live by the fad, you die by the fad.   The company is trying to cut costs to stay in business - a sure sign of flop sweat at this point.

Can they stay alive?   Perhaps.  I was in South Beach, Miami the other day, and they actually had a Benetton store there, if you can believe it.   Many of these fad chains don't die off entirely, but sort of just fade away to become niche retailers - perhaps hoping that someday, lightning will strike again, and suddenly everyone "must have" a Hollister t-shirt, if nothing else, to be retro.

And who knows?  Maybe today's teens are wising up and realizing that working an after-school job (if you can even get one) for 20 hours a week, just to buy a t-shirt, is the ultimate in idiotic behavior.  Maybe, when push comes to shove, overpriced poorly-made clothing is the first "luxury" to get shelved.

Maybe, but I doubt it.

I think the real deal is this:  These fad clothing stores have a half-life of less than a decade.   When I was a mall rat teen, working at the Old Tyme Gas Light Restaurant, the popular clothing store for "young people" was Chess King.

By the time I was graduating from college, (about a decade later) Chess King was no more, but all the clueless girls from Long Island were wearing Green-and-White sweaters with "BENETTON" on the front of them, in foot-high letters.   That fad lasted about - a decade.

Since then, there have been other trendy clothiers to hit the scene.  DKNY exploded on the scene, and then faded away (When Mark was working at Linen's N Things, a young woman came is asking if they had "any of that Dickney Stuff").  Abercrombie was popular about 15 years ago, and has already hit the skids - upstaged by the more trendy Aeropostale brand.   Aeropostale, in turn, has seen its fortunes wane, no doubt replaced by some new "hip" brand of clothing, that we oldsters haven't heard about yet (and could care less about).

And the vaunted "must have" item of teen clothing ends up languishing in the closet, or sold at a garage sale for ten cents.

So what's the point of all this?   Buying trendy crap that is poorly made and aimed at the youth market is a total waste of money.   It doesn't make you an "individual" to wear a uniform identical to all the other teens.   The coveted T-shirt or hat that costs far more than it is worth, will seem pointless within a year or two.    In fact, you will likely be mocked for wearing it, once the fad wears down.

Save your money and buy things that are timeless fashions.   Cheaply made "pre-distressed" fashion jeans will wear out in a year - and look hopelessly out of date.   A good pair of quality jeans that fit well, will last years, and never go out of style (and will be "distressed" naturally, over time).   Split leather fashion coats are junk that fall apart in short order (and go out of style).   Real leather jackets, on the other hand, never fade from fashion, and in fact, still hold their value (I had a black motorcycle jacket that I wore for 10 years - and later sold it to a "vintage" leather shop for more than what I paid for it!).

Invest in quality, not trendy branding and fads.