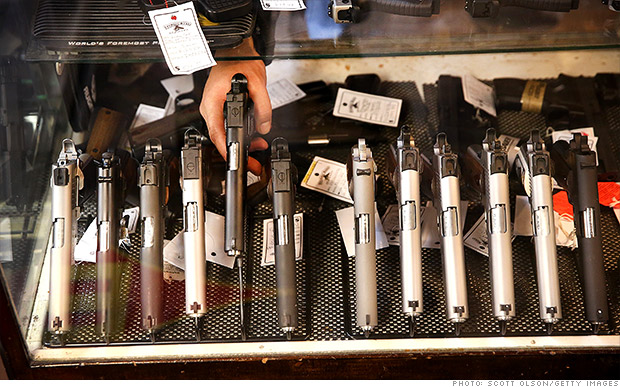 A recent CNN story reports that gun sales have dropped by more than a third in January.   This is not surprising to anyone who has experienced any kind of speculative bubble or frenzied buying scenario.

What caused gun sales to drop?  It is not hard to figure out:

1.  After six years of the Obama Administration, no one came to "take their guns away", despite several high-profile shooting incidents.

2.  Everyone who wanted a gun - or multiple guns - bought all they could afford, and don't need anymore.   Once you have four or five assault rifles and handguns, do you really need another one?

3.  Guns are not cheap, nor is ammo, and people need money for more urgent daily needs than the "end times" or whatever.

4.   Weapons producers (and ammunition manufacturers) have been cranking up production to meet demand (just as gold producers have) and have saturated the market with weapons of all sorts.

The net result is, well, demand eventually slackens.   Whether it is hula-hoops or gold, eventually people stop buying - and stop panic buying - particularly once demand is satiated and people realize that any perceived "shortage" of a commodity is really nebulous.

Guns, like anything else, are a fungible commodity.   It turns out that anyone can manufacture a gun, with the right machine tools.   As a result, you are seeing a lot of new brands in the weapons business, and if you want an assualt-style rifle, you can buy one of several models, right down at Wal-Mart, starting at $999.99.

(Can't afford the real deal?   Want something to train the kiddies in paranoia?   How about the "Crossman Doomsday Bug-Out Survival Kit" available at your local Wal-Mart for $79. (you save $40!)   Just the thing to teach your children survivalism and a distrust of the government.   Militia membership extra!   And no, I'm not making this shit up).

I had thought about investing in a weapons manufacturer stock - or perhaps an ammunition manufacturer stock.   After all, making money off the foibles of the poor is like shooting fish in a barrel (or like shooting old appliances with your AR-15).    My Altria stock is paying a nice dividend and doing nicely, thanks to the legions of white trash who still smoke ciggies.   Why not tap into this ammo business?

I looked into it, and was shocked that some of the "old name" firearms manufacturers were actually not doing well, even in this era of gun paranoia.   Many of the old-line firms have contracts with the U.S. Government, and as we wind down our wars and stop shooting people, demand for government firearms is slated to decline.

And the more I thought about it, buying firearms or ammunition stock now was like buying Apple stock after it already shot up in price.   Once you hear about a trend in the media, it is too late to jump on the bandwagon.   The time to invest was before Obama was elected.   The time to dump was a month ago.

Timing the market is very difficult, without a time machine.

So what does this portend for the future of weapons sales?   Well demand is saturated, and as the CNN article notes, supply has caught up with demand.  No doubt a lot of people got into weapons ownership - or expanded their weapons collection - in the last few years, as we are all herd animals, and whatever is mentioned a lot in the press seems like a good thing.

New firing ranges have sprung up all across America, and people are spending more time firing their weapons, instead of leaving them in a closet "just in case" the black people try to break in (and no, people really think that way - and yea, it is just a tiny bit racist).

But in a way, I think it is a bit like America's golf boom of the 1990's.   You remember that, don't you?   Suddenly, the baby boomers, all hitting late middle-age, decide to take up golf (and cigars - remember that fad?) with our party-boy President (Clinton) leading the way.   And yea, I have a set of moldering clubs in my garage, too.

New golf courses were built, membership in golf clubs expanded, and club and ball sales soared.   It was a heady time.   Since then, it has tapered off, somewhat, and today it is a lot easier to get a tee time that it was in 1998.   (And the walk-in humidor at the local liquor store is now just a storage closet).

Fads come and go.   There are still a hard core of golfers, to be sure.   But a lot of people who only dabbled in the game, might have moved on to something else.

And I suspect you will see the same with weapons.   Bud buys a handgun, as his paranoid friend Ted tells him "Obama is going to take away all our guns!".   And Ted says that spending Saturday afternoon at the range is "a lot of fun".   So Bud buys a handgun and ammunition at the local gun shop and spends a few weekends with Ted at the range.   At first it seems like fun and all, meeting new friends, and the thrill of firing a weapon.

But eventually, the thrill fades, and the cost of ammunition (inflated by the "shortage") starts to spoil the thrill a bit.   And Bud starts to realize that Ted has a lot of scary friends, and moreover, he has better things to do with his money.   So the Buds of the world lose interest, over time, and eventually, Bud decides to sell his handgun on Craigslist, as he needs the money.

I know a few Buds, personally.   Heck, there is a little Bud in all of us - latching on to the latest trendy fad, if just as a dilettante, before moving on to the next trendy thing.   The golf clubs in my garage attest to that.  I've been meaning to get out on the course (we only have four here on the island) but it seems something always comes up.   And suddenly four years go by, with no golfing...

So what is the upshot of all of this (no pun intended)?

1.  Whenever someone tells you that you should "buy now!" because something will be in short supply, take it with a grain of salt.

2.  The law of Supply and Demand is inflexible.  Whenever something is in short supply - and prices rise accordingly - other producers will enter the market with like or similar products, at slightly lower prices.

4.  Once demand slackens, a surplus may occur, and prices may in fact plunge.

We've seen this before in the vehicle market, for example.

In the 1970's, car manufacturers told us that "the Full-Sized American Car" will soon become extinct.   "Buy now!" we were told, as "They won't make them like that anymore!"

And there was a nugget of truth to that statement - the car manufacturers downsized all of their models in the late 1970's.   And many offered "collector editions" of these sleds, and newspapers at the time reported people buying huge America cars and putting them in storage as "collector's items".

But a funny thing happened.   It turns out no one really wanted these poorly-made cars which got horrible gas mileage and rusted quickly.   And in a few years, like most cars, they wore out, and were not "collectible" at all.   Even today, you can buy them fairly cheaply.

And, as it turns out, the "Full-sized American Car" didn't die out, but soldiered on.   The Crown Vic's, Grand Marquis, and Lincoln Town Cars of the 1990's and 2000's were nearly as large as their predecessors.   The re-sized Chevy Caprice of the 1990's was actually larger than its whale-sized ancestors of the 1970's.   The full-sized car did eventually die out, but not until 2011, when the last Crown Vic went down the assembly line in Ontario.

A similar thing happened in the Motorcycle industry.   In the late 1990's and early 2000's, sales of Harley-Davidson motorcycles expanded greatly.   Our economy was booming, and everyone, it seemed, including Maclom Forbes and Elizabeth Taylor, needed a new "hog".

Demand shot up, prices went up, and before long, the Japanese motorcycle manufacturers started offering big, "American-style" bikes.   Even BMW got into the act with an amazingly ugly E-Z rider that was even featured in a Bond film.

Of course, real Harley riders weren't going to buy a "Jap Bike", so some enterprising folks resuscitated the old Indian brand, and Polaris came up with the "Victory" brand.   As the market for "hogs" has begun to slide, Polaris bought up Indian.

2009 brought an end to the hog craze.   Yea, sure, the hard-core bikers will still buy them and use them.   But a lot of other folks, who got into the game late, and were not as committed (but rather just following a trend) got back out again - and sold their bikes when the economy went downhill.

These things occur in cycles, and the one sure thing is that, what is insanely popular today (and in short supply) will be a glut on the market tomorrow.

So when someone tells you that you "must have" the latest thing, whether it is a Facebook page, a smart phone, an Aeropostale t-shirt, an ounce of gold, or a handgun, think long and hard before you buy the product - or the stock of the company making it.

Chances are, in a few short years, you'll find the same Beanie Baby at a garage sale, unsold, for ten cents.

UPDATE APRIL 2014:   Well, that didn't take long.  The Gun Bubble has burst.  And folks who paid top dollar for an "assault rifle" now own a useless commodity that is worth half what they paid for it.   Sort of like buying Gold at $1800 an ounce (it now is languishing at $1250 or so).

Guns, like Gold, are a fear commodity, and can sell only in times of uncertainty.   As the economy improves and threats of "cutting off gun sales" subside, the demand drops off the map.

And then people who really couldn't afford these things in the first place (Cletus in his Trailer) realize they squandered $1500 on a weapon worth maybe $500 on a good day.   And they realize it is just a "thing" languishing in the closet that has no real practical use in their lives. So they sell it when they need rent money or drug money or whatever, which further depresses the prices.

Meanwhile, gun manufacturers, who ramped up production, face a catastrophic fall-off in sales, as the market is flooded with cheap used guns.   Buying weapons stocks, in retrospect, would not have been a good idea - which is why I am glad I didn't take that gamble!