Is the ACLU Good or Bad? Bad. When an organization sends out a mailing that is faked-up to look like a government form, they are lying to you.   They also think you are an idiot.   Either way, it ain't good.  Click on image to enlarge.

Is the ACLU good or bad?   They are good in that they take up cases that do defend the rights of individuals.   They are bad in that sometimes, these individuals are Nazis or other odious people.   Like with PETA, sometimes the ACLU goes too far to make a point.

But a recent mailing I received from them definitely puts them in the "BAD" camp with me, from now on, and forever.

Well, it was a faked-up mailing chock full of lies.   And people who lie to me are not my friends.  As a great man one said, "Whenever someone enters into a business relationship with you, predicated on a lie - no matter how trivial - the relationship will go downhill from there."

And yes, this deceptive mailing is full of trivial lies and mis-truths.   But why should the ACLU be deceptive at all?

The image above is the envelope this "survey" came in.   Before you even open this envelope, you can see it is full of tiny lies, right on the face of it.   The size, shape, and format of the envelope mimics a government mailing, and it is being mailed out at tax time.    Are these the 1099 forms I was waiting for?  Or my refund?  Or a notice of audit?   I'd better pay attention to it!

Note the meaningless black bar on the left, and the notation of "Code 00-01-01-2014" - this must be official!   And it is stamped "DO NOT BEND", so there must be something important inside!

Actually no, on two counts.

First, it is not stamped "DO NOT BEND" but rather the envelope was pre-printed with a fake "DO NOT BEND" stamp.   So there is a little lie right there.  No one was stamping these envelopes by hand, they were a mass-mailing.   And if you are going to print "DO NOT BEND" on the envelope, why bother making it look like a distressed hand stamp?  Lying again.

And of course, if you open the envelope, there is nothing inside that can't be bent.   It just has a few sheets of paper with a bogus "survey" to fill out, and a pitch to send money to the ACLU.  It could have been sent in a standard #9 envelope, in reality.   But that wouldn't look as important, would it? 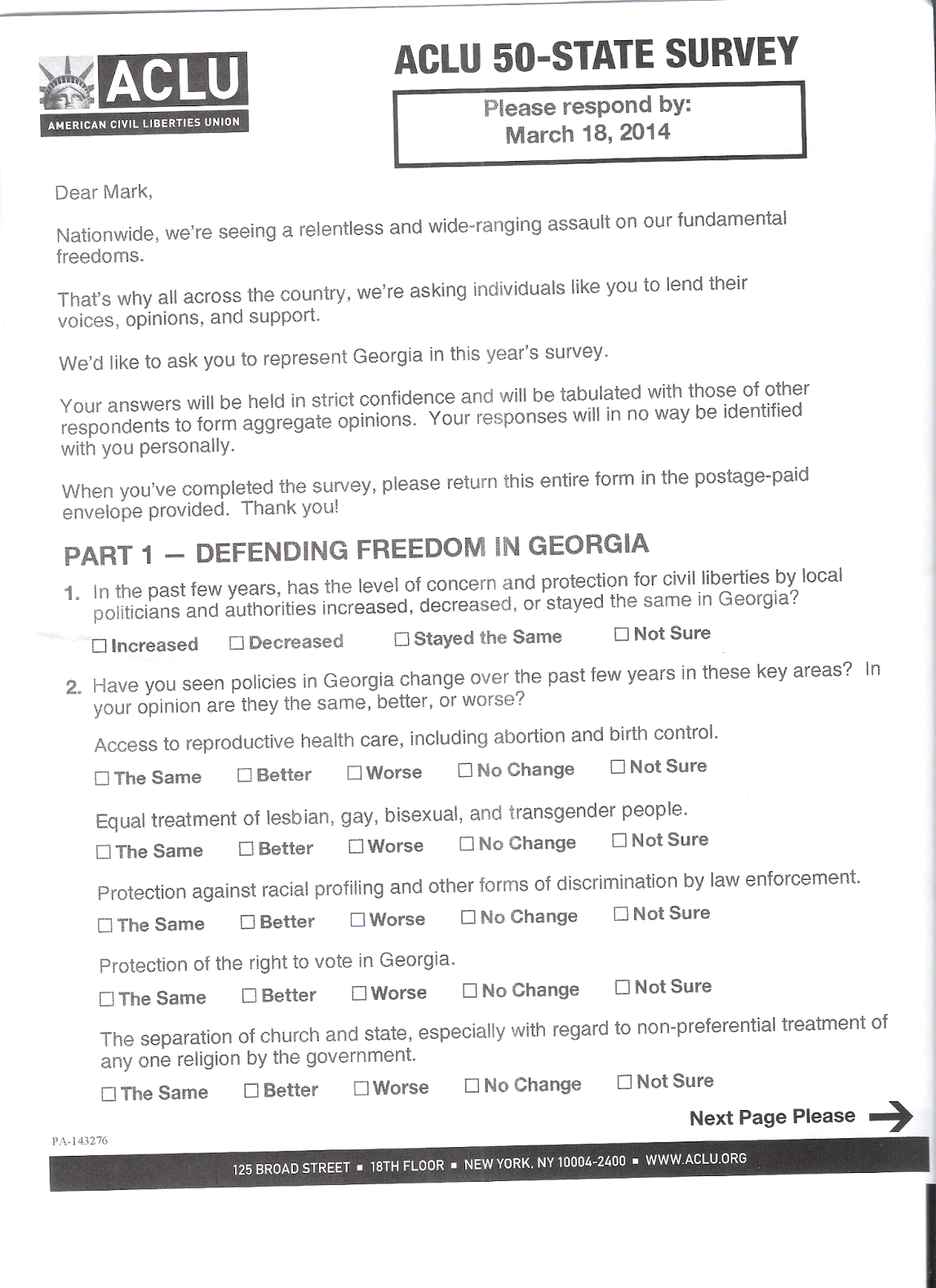 Not only am I being asked my opinions on important questions of the day, but I am being asked to represent the State of Georgia!   Gee-whiz!  What an honor!

"So what?", you say, "what's the harm in making a deceptive-looking envelope and providing a bogus survey as part of a fund-raising drive?   Everybody does it!"

And yea, you're right.  Everyone does.   But you don't expect an organization like the ACLU, which is supposed to be on the side of freedom and righteousness, to be engaging in sleazy and deceptive tactics, just to snare your eyeballs and credit card number.   This is the sort of nonsense that organizations like the ACLU should be against.

It would be like getting deceptive junk mail from Consumer Reports.   Whoops.

But sadly, many organizations claiming to represent "the little guy" engage in these types of practices all the time.   The AARP is famous for its deceptive flyers for Elder Life Insurance, usually stamped "URGENT!  OPEN AT ONCE!" - when in fact they are not urgent and are in fact,  junk mail.

Organizations take on a life of their own, and the number one goal of any organization is self-preservation.   People at the top of such organizations make a lot of money, and keeping the organization going becomes the name of the game.   And this is why, I think, the ACLU, the NRA, and PETA are seeking out more and more extreme agendas - they have to find new outrages, in order to justify their existence.

The ACLU started out defending personal liberties.   Now they take extreme cases and try to get manger scenes removed from town squares.    The NRA started out as a hunting organization.   Now they push for guns in schools.   PETA started out helping animals.  Now they want us to outlaw fishing.   All three organizations are victims of their own success.  They have to move to the fringe, in order to survive.

How much do the people who run the ACLU make?   It is hard to say, as they don't give out numbers.   According to the Better Business Bureau, however, only about 36% of the millions they take in every year, goes into projects.  (Disclaimer, the source of this information is Fox News).

But to me, this mass-mailing (addressed to "Mark Bell") tips the scales for me.   Not only is the mailing deceptive, but it insults my intelligence.   The ACLU thinks I am a chump who will open an envelope that is faked-up to look like something from the government.  And they think I am dumb enough to believe that my opinions on a "survey" are important - and not just a come-on for me to send them money.

This mailing tells me the ACLU is not my friend and does not have my best interests at heart.   This e-mail tells me that the ACLU is in survival mode, and will do anything - anything at all - to raise money.

Sorry, but no sale.  If you lie down with dogs, you get up with fleas.   Sending out deceptive mass-mailings faked up to look like government documents or "surveys" is not enhancing the reputation of the underlying organization.