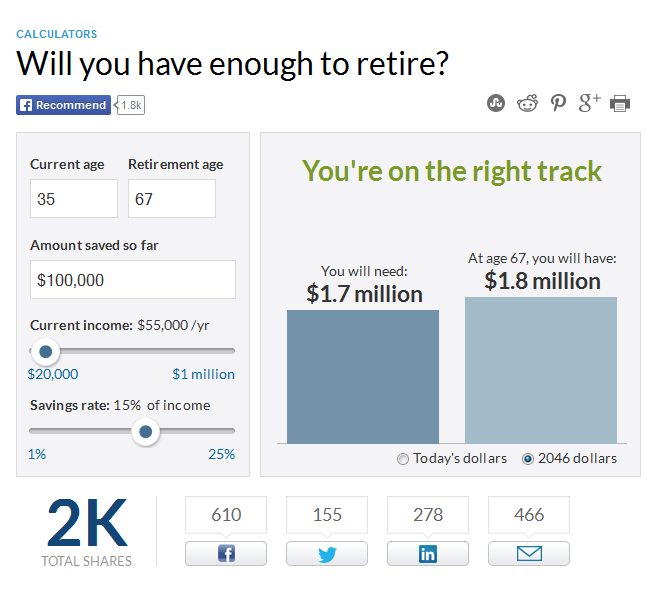 A retirement calculator can be a useful tool.

CNN recently reported that "401(k) balances are at an all-time high!" which is an idiotic headline for a number of reasons:

1.  Over time, more and more people will contribute to their 401(k) plans, and balances will increase.

3.  As the population increases, more and more people will put money into 401(k) plans.

So, the statement that "401(k) balances are at an all-time high!" is like the GOP calling every tax increase "The biggest tax increase EVER!" - because dollar amounts always increase over time, due to inflation if nothing else, so everything in the financial world gets larger.

It doesn't mean much, though.

Numbers always go up, other than for short-term losses, like in 2009 (which evaporated within a year or so).

It does create a compelling headline to generate click-through revenue, right?

The story did have this link to an interactive  retirement calculator, which was very interesting to try out.

The calculator appears to use some variant of the 4% or 5% rule to figure out if you have enough money to retire:

Methodology
This calculator estimates how much you'll need to save for retirement. To make sure you're thinking about the long haul, we assume you'll live to age 92. But you could live to be 100 or incur large medical bills early on in retirement that may raise your costs even further. Social Security is factored into these calculations, but other sources of income, such as pensions and annuities, are not. All calculations are pre-tax.

It goes on and on, though.  If you want to click on the link, you can read their methodology in more detail.  It assumes that your retirement income will be 85% of your working income, adjusted for inflation.

I plugged in some numbers, and it was reassuring.   Even if I save very little (1%) from here on out, I can retire at age 54 (March of this year) with an income of $65,000 a year (which is more than I am making now).  It makes me wonder whether I should just retire right now.

The problem is, of course, that most of this money is tied up in IRA accounts, and if I decide to "retire early" I would pay a 10% penalty for early withdrawal.   A big chunk is tied up in investment Real Estate (still!) which for various reasons I cannot liquidate right now (but will likely be able to do so, in the next five years), and the balance is in Life Insurance policies, which are generating nearly 100% rate of return on the premiums invested - so it seems kind of silly to cash those out right now.

So, it looks like I'll have to work another five years, until age 59-1/2, when I can tap that sweet IRA without paying a tax penalty.

So, here's irony for you:  Right now, I live like a pauper, on not a very large income.   But when I hit retirement age, I will have enough saved up to live larger than I do today.   I hope I live long enough to retire!   Because that would be the ultimate irony - sacrificing the now for a later than never happens!
Newer Post Older Post Home