A Trip to the Casino 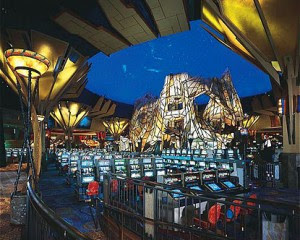 The Casino is an interesting machine - a machine designed to separate you from your money.


We took a trip to a casino - and didn't gamble a cent.   We are in Connecticut and our friends and their entire family like to go to the Mohegan Sun casino, and since they all lose so much money there, they are "high rollers" and can bring guests there for free meals and drinks - and sometimes even free hotel rooms.

It was, to say the least, an interesting experience.  And other than tipping the waiter, I didn't spend a cent.

I wrote before about the Mohegan Sun, as I was thinking of buying one of their bonds.  They expanded the casino considerably and borrowed a billion bucks to do it.  In the end, I decided not to buy the bonds.   While revenue is up from 2009 levels, it is not like the old days just yet.  And they need lots of revenue to pay off those debts.   Worse yet, more and more communities are building casinos - often outside of Indian reservations - so the supply of "gaming facilities" is saturating the market.   If this continues, some Indian tribes might end up broke, yet again.   Why drive two hours to some Indian reservation if they build a casino two hours north of New York City?

Once again, the red man is screwed by the white man!

Like the casinos in Las Vegas, the Mohegan Sun was bright and distracting, with lots of glitz and glamor, or at least things that were designed to look glamorous to the untrained eye, but looked tawdry and cheap to the trained one.  It was loud, too, but not as loud as the casinos in Las Vegas, which was a relief.  The food in the "high rollers" club (you must be a soaring or ascending member to enter!) was good, although not spectacular.   The drinks were free, but small, and the waiters had a fixed schedule for visiting tables, so your drink intake was regulated and no one got out of hand.   Casinos are like that - very controlling of your behavior.

The same is true with the buffet - all you can eat, but they provide 6" plates and serve small portions, so you eat all you take and there is less waste.   This is not a bad thing, of course.  We all need to eat less, in America.

And the cameras.  I counted 70 just from where I sat.  Nothing happens in a casino that isn't planned, controlled, monitored and watched.   Like with Disney World, you may think you are making spontaneous decisions, but your actions are preordained by the herding techniques they use.

I have a question, though.  What's with the endless miles of corridors?  We walked back to our car at the "Winter Entrance" (parked there as we could not fit in the garage) and we must have covered a quarter-mile in carpeted corridors that seemed to serve no purpose other than to occupy real estate.  50-foot wide corridors, all air-conditioned and everything.  What is the point of that?  Just wasted space.  Put a slot machine in there, or something!

But of course, the most interesting thing was the people.  Our hosts provided some real insight right off the bat.  One explained that they liked to come here as a vacation destination (they went nowhere else) and so long as you understood that the "house always wins" you will get along.   The other host said, "When I look out over here (where the playing was going on) do you know what I see?  LOSERS!  Tons and tons of LOSERS!  And that includes ME!"

Both realized that you can't "win" at a casino.   At best, you blow through some money and they give you a "free" hotel room and a meal and some drinks.  It is a like a cruise ship - a LOT like a cruise ship.    Except that the price you pay is not advertised or set in stone.   You can control how much you lose, I suppose, and the more you lose, the more you "ascend" or "soar" into the land of 3 ounce free drinks.

(For me, if I was to do this, I would not bother wasting time at the slots, but just over to the "high roller" blackjack table, blow a couple of grand on one hand, intentionally lose, and then hit the buffet.   Why not just cut to the chase and save all that time?  But of course, I would just rather pay for my food, rather than play games like this.)

Others at the casino looked very sad.   350-lb men and women playing the slots.  People stuck in front of these machines like rats in a Skinner box.   People with odd sartorial choices.  For example, one young man from New Jersey wearing pre-distressed torn jeans, a long-sleeved t-shirt that was covered with fake tattoos, and the most wicked mullet I have seen in ages.  And the way he strutted around, he clearly thought it was a "look".  It was a look, alright.  Sort of confirmed what everyone thinks about New Jersey.

It was fun to go, but it struck me that it was not a happy place for most people.   You go, you lose, and then you drown your sorrows in cheap booze.   In the brochures and on the website, everyone is smiling and having fun.  In reality, most people look pretty grim, at least while they are "gaming".

What was strange is how many people brought their children there.   I was amazed they didn't have kid-sized slots for the kiddies to play.  I am not sure what the kids would do, while Mom and Dad gambled away their college fund.   Casinos and children - doesn't seem like a good mix, but then again, that baby-sitter money is better spent on the slots, right?

I guess the "value" people find in this, is entertainment.   You lose money, you get perceived "freebies" (that you are paying for, by losing) and it satisfies some need in your brain that you are getting away with something, when you are clearly not.   I cannot say how much our hosts lost that day, but I suspect at least $1000 or more, perhaps far more - far more than the meal and drinks would have cost if paid for.  But again, "Free" isn't, and by obscuring the real cost of these getaway weekends, the consumer has less of an idea of what things really cost.  The more complicated you can make any financial transaction....

And speaking of complicated, try to figure out these "Momentum" levels of membership in the casino.  The more you play, the more points you accumulate!  Sounds like clipping coupons to me.    Sounds like another casino game to play, where you never actually "win" at all.

And speaking of winning, while both our hosts admitted that the "house always wins" and that they are "losers", they nevertheless regaled each other with stories of "big wins" they had or that friends had.   "Joey won $4000!!!" one would say, neglecting to mention that over the weekend, Joey's net loss was $2000.   Gamblers remember wins and forget losses.  They remember the freebies and don't remember the costs.  It is the nature of the beast, and casinos cater to it.   It is a form of compulsive behavior, and as I noted before, you can make a boatload of money catering to compulsive behaviors, whether it is drinking, smoking, gambling, sex, or iPhones.

It was interesting to go, but frankly, I can't see myself going back.   Gambling is a really, really bad idea.  And a casino just isn't that interesting place to go...

From a business model perspective, I see trouble on the horizon.  With so many casinos saturating the market - and so many more on the drawing board - they will start to cannibalize each other's business in short order.  The casinos closest to major metropolitan areas will steal business from the other ones further away (the latter being Indian casinos in most cases).

The casinos thus have to "double down" their bet, and provide other forms of entertainment, to attract more visitors.  They have to offer rock concerts, shows, conventions, and whatever else it takes, to get the warm bodies in the door (and hope they gamble).   So it makes sense that the Mohegan Sun borrowed all that money to expand.   In the casino business, the name of the game is expand-or-die.   No one is going to drive four hours to gamble, when they can gamble an hour from home, unless you have some particular "draw" such as better amenities or the like.

And since gambling is now so pervasive, the "draws" have to be greater and greater.  Most Americans live within a half-hour of some kind of gambling venue.  On the island, we have a gambling boat that goes offshore.   Even the local 7-11 offers a lottery.  The need to fly to Vegas is diminishing.  But ironically, this is driving larger and glitzier casino construction - to make the trip seem worthwhile.

It is a fascinating business.  I have no intention of patronizing it, however.

P.S. - on the way out, I stopped at their gas station to get gas.  The gas pump said "card not read" and would not dispense any gas.  For some reason, Capital One put a fraud alert on my card, as even though the card was not read, it put a $99 hold on my credit card.   The Nissan holds less than 20 gallons of gas, which at $4 a gallon could not reach $99 on a good day.  So as a bonus "fuck you" from the Casino, I had to spend an hour on the phone this morning with my credit card company straightening that out.  It just sort of confirmed the kind of sleaze factor these places have, in my mind.

UPDATE:  Apparently the overbuilding of Casinos is already having an effect on Casino-destination areas like Atlantic City, which has seen a wave of Casino closings - and not for the purpose of rebuilding, either.   Even the casino "gaming industry" lobbyists admit that Atlantic City may never bounce back to its casino heyday, as consumers would rather go to places closer to home.

Could Las Vegas be next?  So far, the only casinos shut down in Vegas are older ones that have been imploded to make way for newer, larger, and glitzier ones.  Vegas understands that you have to "double down" your bet, if you are going to survive - and offer a compelling reason to fly there.  What's next?  under-aged prostitution?  Oh, right, they already have that.  Convention business and all.....
Newer Post Older Post Home