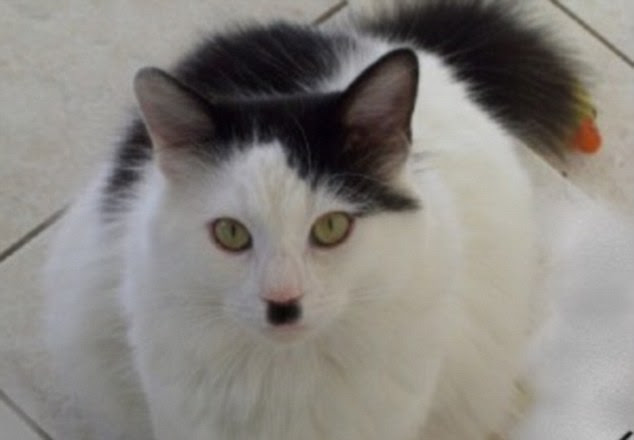 Some folks claim that the ordinary house cat is an "invasive species".    Watch out, Poland!

Your tax dollars at work.   Here on the island, they have attached little cameras to cats to monitor their behavior.  The University of Georgia is funding the study, which in turn is funded by your taxes.

They also have sent out a "feral cat awareness survey" to everyone on the island, and again, this is funded by UGA.   The "survey" is more of a "push-poll" in that it asks questions that are more answers than questions.  "Did you know that cats are responsible for killing billions of songbirds every year?" - that sort of thing, courtesy of the bureau of specious statistics.

Actually, the results of "kitty-cam" so far are that cats (1) lick themselves a lot, (2) sleep, and (3) eat cat food.   Only one cat has been caught killing for food, and no word on whether it was a rodent or a bird.

But the oddest thing about this "poll" was that they were trying to characterize house cats as "invasive species" by the way the questions were asked.

"Invasive Species"  is the hot, new, trendy term for biologists and wildlife managers to use - and one they use to justify poisoning the air, water, and soil, all in the name of "preserving nature".

We are told (get this) that some species are "native" and others are "invasive" and that the latter need to be slaughtered, as they will push out the "native" species over time.

This may or may not be true.   The point is, the species doesn't consider itself "invasive" anymore than the species it is displacing (which at one time was no doubt "invasive" as well).

Some try to put a spin on this based on a human vector.   If the species is relocated due to some act of mankind, then it is "invasive", whereas if it just migrated here, I guess it is natural.  This also is a load of hooey, as the vectors that move species from one area to another have little to do with whether the species would eventually get there under its own power, or whether it would adapt to the new environment.

Yea, I'm talking about you and me - human beings.   We have over-run the planet, but no one talks about euthanizing or neutering people on a massive scale.

On the other hand, we can poison some trees or a carp or whatever, and that's going to fix everything up just Jim-Dandy!

I think biologists who believe that have their head up their ass, or are just looking for grant money.

In the Northeast, we are told the Zebra Mussel is "invasive" - but it has turned murky brown lakes crystal clear.   The powerplant that has to clean its inlet screens, we are told, is justification for dumping poison in the water, or for fining some unwitting fisherman hundreds of dollars for dragging a piece of seaweed on his boat trailer.  The upshot is, the zebra mussels are winning, much as the lamprey eels are (and the snakehead fish).

In the Everglades, we watched as "wildlife managers" drilled holes in trees and filled them with poison.   Their crime?  Being non-native.   Whether this will permanently kill off these trees is debatable, and the long-term effect of poisoning nature is something not studied.   And the cost of this "cure" is pretty staggering.

Nature expands into environments where it can adapt, and you can't stop that.  It is like Boyle's law about gas - it expands to fill a vessel.   Trying to hold back the tide of species is pointless and fruitless (pardon the pun) as nature will sneak around at every turn, as soon as you let your guard down.

Yes, it is bad there are Boas in the Everglades.   It is also irrelevant whether they got there as escaped pets or were dropped from an airplane or swam over from South America.   They are there, and trying to extinguish them is going to be a long, difficult, and expensive job that will never get done.

Here on the island, a couple runs a program that captures and neuters cats and then releases them.  It has been effective as the cat population has plummeted from the 1990's until today.   (They did a similar thing in Key West, and now there is no cat problem, just a chicken problem).

But on the other hand, we are being overrun by deer - and not in the sense that "the deer ate my flowers" nonsense.   We simply have more deer than the island can support, and they are becoming smaller and more sickly as a result (and more brave, as they are not afraid of humans at all).   New breeding stock was brought in to try to reverse the trend, but it has not really helped.   Talk of managing the deer population or relocating deer is shouted down as "inhumane".

But apparently, it is open season on cats.

(Disclaimer:  I do not presently own any cats.  I like them, but don't like cleaning out litter boxes.  Hence I have no cats).
Note also that deer have been linked to lime disease. Wherever deer are overpopulated, ticks flourish and lime disease spreads.