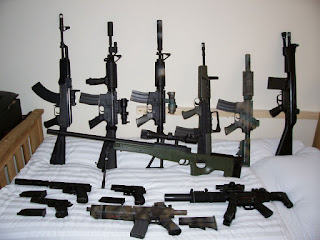 There are so many shootings these days, that I could start a second blog that just summarizes the days shooting events.


Note: due to travel, this posting was delayed by a couple of weeks.

Shootings are taking place at a rapid clip this week (pardon the pun).   And by shootings, I don't mean the run-of-the-mill crimes of passion or robberies, but the wacko assault-style shootings of schools, stores, malls, police stations, courthouses, or other "targets" - usually by mentally ill people with lots of high-powered "tactical" weaponry and accessories.

According to some sources, deaths from gun violence will be greater than that from auto accidents, as soon as 2015.   In case you were not paying attention, the slaughter on America's roads has been a huge concern for decades - resulting in the institution of "safe highways" measures, seatbelt laws, airbags, safer cars, and in the near future, driverless cars.

Yea, we thought that losing 40,000 people a year was alarming enough to invent robot cars.   But losing the same amount to gun violence isn't worth doing background checks over - to screen out criminals and mentally ill people.   No matter what solution is proposed, it is shouted down as "it wouldn't work!"    We just have to live with daily shootings.

And the ultimate goal of the gun proponents is becoming increasingly clear - a heavily armed society, where everyone - and I mean everyone, walks around with a gun, as evidenced by the "right to carry" laws and proponents in Texas, who are taking AK-47's and AR-15's into lunch counters and scaring the shit out of everyone.

What the fuck is going on here?  What the hell happened to our country?

A lot of things, it seems.

The idea of "an armed society is a polite society" goes back to Robert Heinlein, and perhaps further.   In his Lazarus Long stories, he harped on that concept again and again, depicting his characters as all being heavily armed (and usually killing off policemen by the dozens, with glee).   Other science-fiction writers have taken up similar threads.

But that is science fiction for chrissakes.  And as Scientology has clearly illustrated, any societal concept based on a science fiction story is probably not a very good idea.

The problem with Heinlein's argument is that we've tried it before.   In the 1800's in the "Wild West" nearly everyone went around heavily armed.   You had a pair of six-shooters, perhaps, as well as a rifle and a shotgun, and of course a brace of knives of various sorts.   There was little law out there, and as a result, you needed to protect yourself from the lawless.

And the carnage was pretty intense.   People would gun each other down at will, and use intimidation and violence to get their way - even "law abiding" citizens.   Fights over grazing rights and water rights escalated into range wars, with little in the way of justice being served.

You see, the problem with the "armed society is a polite society" theory is that the fellow with four of his armed buddies is always going to be able to outgun you.   So not only do you need to be armed, but you need to travel in a pack.

And today, we have that society in a part of the world known as Afghanistan, where people band together in tribes for protection (much as our ancestors did), ruled by a "Warlord".   And the carnage is terrific.

Is that how we want to live?   With people riding around in posses in the back of pickup trucks, armed to the teeth and manning checkpoints?   With neighbors resolving disputes with drawn weapons at 50 paces?

Do we really need to go back to dueling?

With every wacko shooting, the NRA harps back that, "Well, if other citizens were armed, they could have disarmed the attackers!"

That may be true, but then again, not.   You see, if everyone is armed and someone decides to "go off" and start shooting people, the result is not the attacker being disarmed but a shootout.

In Las Vegas this week, two armed police officers were shot at point blank range while they ate lunch.  These are trained men, who had sidearms readily available, and knew how to use them - and were ready to use them.   They could not defend themselves.   The ultimate "Good Guy With a Gun" could not stop the "Bad Guy With a Gun" as Wayne "Call me Crazy" LaPierre postulated.

How did we get this far, and were things always like this?

The answer to the last question is a resounding "NO".   The second amendment was never interpreted, historically, to hold that the States or the Federal Government have no powers to regulate firearms whatsoever.   Rather, such regulations must be shown to be necessary and not outright forbid gun ownership across the board.

Thus, you cannot own tactical nukes.  You can't even have a Howitzer (that works).  You can't have hand grenades or mortars (except ones that shoot fireworks).   And we can regulate where and when you can carry a weapon, and whether you can carry it concealed or not.   When I was a kid, getting a concealed weapons permit was a big deal - and you first had to show need to have one.

For some reason, the NRA has re-written history and gotten people to believe that the second amendment is an absolute right, and that "gun control legislation" is some sort of recent innovation that is unconstitutional by its very nature.   The opposite, is of course, actually true.   We've long had regulations about firearms possession and carrying, and it is only recently that these regulations have been repealed, mostly in red States like Texas and Florida.

Attempting to monitor and track people with mental illnesses is also problematic, in our "free society".    Back in 1956, they passed a Federal law to implement mental health care in the "Alaska Territory" before it became a State.  Until then, mentally ill people in Alaska were shipped to Oregon for treatment, which was expensive and less effective.   A proposal was made to set aside the income from a huge tract of land, to pay for a mental health institution in the Alaska territory.   The John Birch types went nuts (yes, bad pun, and redundant too) and claimed that the goal of the law was to create a Siberian-type prison camp, where anyone in the United States could be committed and whisked away and kept up on the cold tundra, away from the prying eyes of the country.    It was, of course, a ridiculous argument, not based on the actual law.  It took Barry Goldwater to push through the bill and to quiet the "Crazy wing" of the GOP.

Since then, being crazy has become a lot more popular, and there is a movement afoot to discredit any mental health sciences and institutions as "brainwashing" people from the "real truth".   Yes, the conspiracy theory nuts and tinfoil hat adherents are worried that they might actually be committed for being as crazy as they are.

And entire gun/crazy culture has been created, in the interim.   I recall my mentally disturbed brother reading magazines like "Firepower" along with his "High Times".   Having an AK-47 or a Mac-10 seemed like just the right accessory to go along with the bong.   And later on in life, he started getting in to guns, although he hasn't shot anyone - just yet.

There is an old saying that if you try to boil a frog by dropping him in a pot of hot water, he will jump right out.  But if you put him in a pot of warm water, and then slowly raise the temperature, he will sit there and boil to death - not noticing the slow and steady change in his environment.

It seems we are being boiled like frogs.   In the half-Century I have crawled around North America, things have slowly changed, and many of them not for the better.   When I was a kid, only a few collectors could own automatic weapons.  And only off-duty police officers or private detectives or security guards could carry concealed weapons - often with a permit.   Gun dealers didn't sell guns to crazy people, not because it was illegal, but because it was the wrong thing to do.  Sure, there were occasional mass-shootings, like the famous "tower shooter" in Texas.   But they were so rare as to be notable.

Today, we hardly take note of them.   Gun deaths will eclipse auto deaths as early as next year - and no one seems to notice or care why or how this came about.   And no one wants to do anything about it, either.
Newer Post Older Post Home