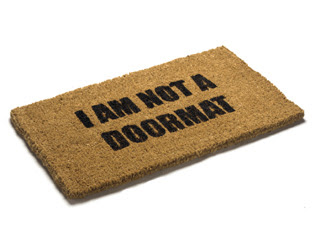 In another posting, I was blathering on about how important it is not to let yourself be a doormat for other people and their problems.  It seems that in the USA, people are trained (likely by the television) to whine on and on about their "problems" all the time, without every trying to take a stab at solving them.

And often, these friends want you to solve their problems for them, usually by you doing things for them, or just cutting to the chase and giving them money.  And after a while, it starts to wear on you.  After all, who is solving all of your problems?   Whose shoulder do you get to cry on?

And it is interesting how this effect works.   Like I said, I think the television encourages this behavior.  These "reality" shows are nothing more than people whining about how hard they have it, so folks start to think this is what "real life" is all about.

There is a thin line between friend and doormat.   And this thin line can cause a lot of trouble for folks.

For example, a friend comes to me very upset.   They have a friend who is engaging in very self-destructive behavior.   Everyone can see it, but no one knows what to do!   It makes his friend very hard to be around.   What should he do?  Sit her down and talk to her about this self-destructive behavior?  Try to sort them out and "fix them" so they don't do it no more?

Nice try, but you can't save people from themselves.  So don't bother trying.  I asked him, "If you sat down and talked to her, what would happen?  Would she change her behavior? Or would she likely be offended and nothing positive would come of it?"  And he had to admit the latter was probably the outcome.

So in other words, he was squandering emotional energy over nothing - trying to help people who can't be helped and don't want to be helped.

So what does that leave?   What can you do?

Well, about all you can do is be a friend and try to be friendly and helpful, but don't be a doormat.   Don't let someone else dominate your life with their problems.  You have to take care of yourself first, or you can't be a friend to anyone.

And sometimes being a friend means limiting contact with folks who are making you upset like this.   If you keep following the road of constantly being harangued by their problems, you'll end up aggravated and depressed.   It is OK to be a friend but be a friend on your own terms.  It is OK to say, "I can't see you today, as I have other plans"   It is OK to take care of yourself first.

And if your friend doesn't understand that, then they really weren't a friend, were they?

Toxic Relationships, of course, can't saved by any means.  And sometimes, just walking away from people who are mean, nasty, abusive, or upsetting, is really the only option you have.   For the sake of your own emotional health, sometimes being a friend means being a friend to yourself first.
Newer Post Older Post Home
View mobile version