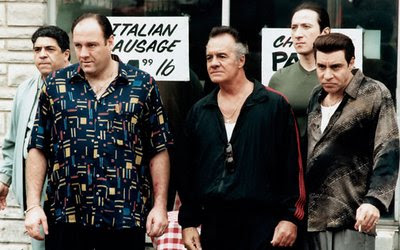 It's tough to be a mobster these days.  Too much competition!

Scene:  The inside of a Mafia meeting room.   Around the table are various shady looking mobsters.  At the head of the table is the "Godfather" of the crime family, who doesn't look very happy

Godfather:  "I've brought youse all in here today to discuss our finances, or in fact, lack thereof.   Income and profits have been plummeting as of late, and I am going to find out what rat has been stealing all of our money" (shakes baseball bat menacingly) "Where has all the money gone?  Which one of youse guys has been stealing from me?   Is it you Rizzo?  The income from the numbers racket is almost nothing!"

Rizzo: (looking nervous) "It ain't me that's the problem boss!   It's these damn lottery tickets!  No one wants to play the numbers anymore, now that you can go down to the 7-11 and play about a dozen different games!   And we've lost most of our gambling income to off-track betting and online casinos and sports betting!   And if that wasn't bad enough, there are now casinos on every corner!  They've honed in on our territory!"

Godfather:   "I don't like to hear no excuses!  You've got to get that revenue up!   What about you, Anthony, how's the drug business going?  You haven't brought me a 'taste' of that in months!  Are youse stealin' from me?"

Anthony:  (starting to sweat) "No boss!  I ain't been stealing!  Our drug business is destroyed!  They legalized pot and everyone is just buying it at government sponsored stores!  How can I sell drugs, when they are legal and cheap?

Godfather:  (fuming)  "Well, what about our loan-sharking business, Knuckles?"

Knuckles:  "Same deal, boss!  They have these payday loan places and title pawn loan places, all over town!  Theys got the balls to charge even more interest that we dit, and its all up and legal, too! I ain't busted anyone's kneecap in months!"

Godfather: (building into a rage) "Surely we have something left!  Prostitution?  Blackmail?  What about it, Rocky?

Rocky:  "Bad news boss.   These folks today are hooking up with 'apps' on their smart phones or finding escort services online.   Worse yet, when we take compromising photos of someone, instead of paying blackmail money to us, they ask for enlargements so they can post them on their Facebook page!   Peoples have no shame no more, boss!   We can't blackmail people who have no shame!"

Godfather:  (steaming) "Well, what about our protection rackets?   I haven't heard of you doing any bust-outs lately, Stevie, what's up with that?

Stevie:  "Haven't had a bust-out in years, boss!  These new investment companies have taken away all our business!  This fella with Bain Capital is snapping up all these companies and then busting them out before we can get our hand in!   And worst of all, it's all perfectly legal!"

Godfather:  "Well what about the Unions?  Ralphie, youse 'sposed to be running the union racket!  But I gets no money from you at all!"

Ralphie: "Sorry Boss!  The unions are almost dead!  The gubment took over the Teamsters and tossed us out!  Then the governor signed a "right to work" law, and most of the union companies have closed shop, moved down South, and opened non-union factories!   I can't hold companies hostage with threats of strikes, if there ain't no union companies left!

Godfather:  (Bursting with anger)  "I've had it with these lame excuses!   I can see what our real problem is now!   It's da gov-ment!   Theys honing in on our territory!   We need to shrink the size of the government and pronto!

Godfather:  "Yea, that's it!  It's time to vote Republican and bring back the good old days!"

Tough to be a mobster these days, I guess.   With so much of their bread-and-butter businesses now made legal, how's a guy going to make a buck in the rackets?   Used to be you could make a pile in prostitution, and then blackmail some "John" with incriminating photos.   Instead, he just goes on Oprah and fesses up to it all and begs for crying forgiveness - and gets it.   If he's a politician, he even gets re-elected.

Drugs?  Gambling?  Numbers?  All legal now - or becoming more legal.   No money to be made in legal vices - except by the government that runs them or taxes them.   No wonder Governor Chis Christie is running for President - he wants to be head of America's real crime family.  You know, the one actually raking in all the dough.

It is an interesting gambit.   When you make something illegal, you just drive it underground, where it can't be regulated and wars will break out over who can control it.   Not too long ago, people "ran numbers" in the city, collecting lottery-like bets for local gambling parlors run out of the back of candy stores.  Or we collected sports bets, stuffing envelopes of cash into mail slots.  Today, we have legal lotteries, legal casinos (near every major and minor city) as well as some online gambling venues (which they keep trying to take down, to no avail).   Why gamble with crooks who likely won't even pay off if you win?   Better off to use a government-sanctioned gambling outlet, the odds are better anyway.

Maybe Payday loans are an odious cancer on our society.  But before they existed, desperate people would borrow money from loan sharks, whose collection terms were far more dire than the payday loan people.   You can't declare bankruptcy to get out from under a loan from a loan shark!

It is an interesting thought.   If you make a lot of behavior legal then the police can spend more time policing that which is not.  And maybe, things like organized crime would decline as a result.

Over the last few decades, there has been a marked decrease in crime in our society.  I wonder if this is due, in part, to our reclassifying a lot of things as no longer being crimes....