How to Game Your Credit Score and Why You Shouldn't 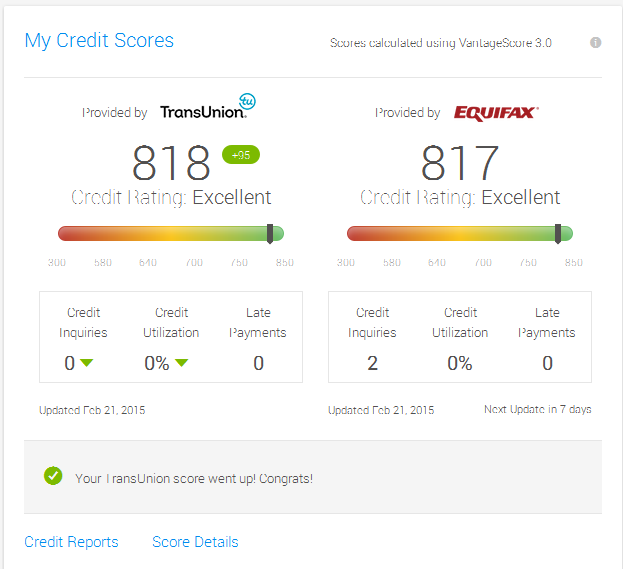 Why do I say that?  Well, in short, your credit score is really not a very good indicia of your creditworthiness and certainly is not a good indicia of your overall financial health.  In terms of creditworthiness, your credit report is a better indicator of how much you have borrowed over time and what your repayment history is like.  The score is, in my opinion, rather arbitrary.
As you can see from the image above, I have what would be called "good" credit as I have little or no debt.   But a funny thing, these scores went down by nearly 50 points this month, to about 770.   What is going on?  Am I about to become a deadbeat?

Well, no.   The factors they use to calculate your credit score have little or nothing to do with your overall financial health.   For example, your net worth is not one factor they consider - largely because they cannot consider it (unless you gave them links and passwords to all of your investment accounts).  And since investments can be liquidated and spent in short order (or hidden) then even having a lot of money laying around doesn't necessarily mean you are a good credit risk.

Capital One "grades" my credit score based on the following criteria:

As you can see, I don't have a lot of "available credit" as I only have two credit cards, with a balance limit of $5000 each.  These are low (7.15%) interest rate cards.   As I have noted time and time again, you can't get hurt by such cards, as even if you ran them up to the limits, you could pay them off at 7.15% over time.  They are a popgun or a squirtgun.   Carrying around $20,000 limit credit cards with 14-25% interest rates, on the other hand, is carrying a loaded .357 Magnum in your pants pockets - ready to blow your balls off.

So the big ding on my credit is not that I have low credit limits, but that if I charge $1000 or so on each card, the balance is relatively high to the credit limit, which shows a high "Credit Utilization" which drags the score down from 818 to 770.  Still considered "good credit" and eligible for all those sweet deals I no longer need.   In order to borrow money, you first have to prove you don't need it.

Would my score be higher if I had more credit cards or cards with higher limits?  Yes.   If I had $50,000 in credit card limits, my credit utilization would be tiny and the "available credit" would shoot up, and I would have a higher score - probably 30-50 points higher.   And the credit card companies want you to do this, too.   You have to call them and ask to lock your credit limit lower in order to avoid them automatically raising it.   Like a bartender serving a drunk or a card dealer encouraging a compulsive gambler, the credit card companies egg you on with their "Congratulations!  We've raised your credit limit!" letters.

Some folks ask me, "Well, aren't you worried about having such low credit limits on your credit cards?  Suppose an unexpected expense comes up?  Suppose you are traveling?"  Well, I am not sure about you, but between the two of us, we have close to $20,000 in credit card limits, which to me is a staggering amount.  I am not sure what expense would exceed this amount.   But moreover, what I do, when I charge something to a credit card, is transfer money online back to the credit card account, so the balance stays low.   So, next month, my credit score will shoot up 50 points again, as I pay off the $1000 balance on the card.   There is also something called a debit card, and if you have money, well, you don't need credit, do you?

And if you don't have money, is borrowing money really an answer to anything?  It has to be paid back - with interest.   If you find yourself constantly borrowing money, you should rethink your spending.  Each dollar spent costs a dollar and ten cents.   By borrowing money you are, by definition, making yourself poorer.

There is one other factor, oldest credit line (some scoring agencies use "average age of all accounts").  If I had kept my Sears credit card, which I opened at age 21, my "oldest credit line" would be higher, as would the average age.   But a decade ago, I went through my credit report and was appalled to find out I had a lot of these old store charge accounts that were still open.   I closed them all.   I even had a Radio Shack store card!

Stores like you to keep these accounts open.  Sears is famous for this.  Shopping for a dress or new tires?  They will ask you for your birth date and SS number and "look up" your old open account and offer to "charge it!"   It makes sales for the company, and they like that.

Myself, it concerned me that there were abandoned accounts like this, often having statements sent to old addresses.  It would not be hard for someone to intercept a statement, and figure out the account number and well, commit fraud.   While it may boost your credit score (by a very modest amount) to have old accounts still open, it isn't worth the risk.   Moreover, these types of "store charges" have astronomical interest rates.

But even if you wanted to "game" your score by trying tricks and tips, the ultimate effect on your score is not going to be very large.   Maybe if you are at 750 and want to get to 770 to score some "0% interest" car loan, you could play around - by paying off some credit card debt.  But then again, these "0% interest" deals are often a joke, as you are forgoing a rebate - and thus in effect are paying interest.  And you are still borrowing money - that has to be paid back.

The big deal, in terms of your credit score - what will drive it up and down by hundreds of points is whether you are current with your bills and have a history of on-time payment.   As you can see, my credit history in this regard is 100% of payments on time, and this is what makes up the majority of your scoring points.   If you have a history of late payments, a recent bankruptcy, a judgment against you, and so forth, no amount of "gaming" is going to bring your score up the hundreds of points necessary to bring you back into the good graces of VISA and MC.   You can only pay down debts, pay on time, and wait until the older "bad" data falls off your report, which takes years.   In other words, you can't "game" your way out of being a deadbeat.

But if you are not a deadbeat, should you try to "game" your score to make it go up?  While you can "game" your credit score, the things you do to "game" it will negatively affect your real financial health.   Your credit score is not an indicia of your financial health.  There are plenty of people out there with dozens of credit cards, tons of debt, and a good credit score.   They are also teetering on the brink of bankruptcy, as they are basically insolvent and have a net worth of zero.   They also have nothing saved for retirement.   They are in the worst possible shape, financially, and pay interest through the nose, to banks.    Yet many of them delude themselves that since their credit score is high, they must be doing well.

A better approach, I think, is to concentrate on your finances and this means getting out of the "I have to constantly borrow money for everything in my life" mentality.   Pay down debts.  Build up cash reserves.  And when you do this, your credit score won't matter one iota.