Selling Yourself on an Idea 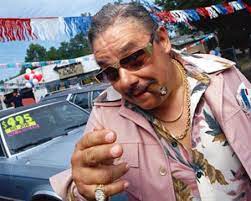 The same techniques that salesmen use to sell products, we use on ourselves to sell us on ideas.
The mind is an incredibly powerful and complex thing, and trying to understand your mind is akin to a toaster understanding its own circuits.   Can the human brain really understand the operation of the human brain?   It seems that the amount of information in a human brain would exceed the capacity of another human brain - unless it is emptied of all content first.   But enough metaphysics.

What I find interesting is that we use the same techniques on ourselves as salesmen do to convince you to buy something.

Consider relationships.  You want to break up with your girlfriend (or boyfriend) for a number of reasons.  They leave the seat up (or complain about you leaving it up).  They argue and nag.  They spend too much money.  You don't like their friends.   And of course, there's the kicker - you've met someone else you like better.

But hey, the human brain can't just acknowledge that last part.  That would be crass and mean and cruel, right?  And we are not crass or mean or cruel people.   We don't want to hurt the soon-to-be ex-girlfriend or ex-boyfriend.   So, instead, we tally up all these little arguments and start to convince ourselves that the best thing to do is say, "Its over!"   Or we subconsciously start little arguments or fights, so we can then rationalize, "That bitch is crazy!  I'm outtta here!"

Sounds pretty mean and crass still, doesn't it?   Yet most people do it.  Perhaps we all do it.   There are opposing forces in our brain.   One half says, "this relationship isn't working" and the other half says, "you're in love with her!  Give it a chance!"   Perhaps the third half says, "Gee, I'd really like to have sex with this new person I met!" but that third half is buried deep beneath the lizard brain.

The same sort of rationalization occurs when you make a major purchase.   You say, "Gee, this old car is getting kind of beat up!  Maybe I should look at a new one!"  And you start counting up the defects in the car, magnifying recent repair bills and whatnot, and then throwing in specious arguments, like, "I'd better trade it in now, before it depreciates further!"   And so on and so forth.   You need a "reliable car" to get to work, right?   And of course, the real reason - that you'd like to impress other people with a shiny new car - you don't admit even to yourself.

We all do this.  Every single damn one of us.   It is part of our human nature, so just get over it and own up to it or in fact, own it.  The worst thing you can do is to be pious and self-righteous and say, "Well, I'm not like that!  I'm better than that!" which we know is not only not true, but also status-seeking behavior.

So, we own up to this.  Where does it get us?   Are we doomed to be self-indulgent and victims of our own folly, again and again?   Well, to some extent, yes.  As I have noted time and time again, we are not an efficient species, merely a clever one.  So don't sweat the fact that you miss the mark about 95% of the time.

Realizing that this is part of your brain - hard-wired if you will - and owning up to it can, however, save you from a world of woe.   For example, when you realize this is what your brain is doing, you can confront it and then figure out what really is your best course of action.   When we act in denial over these emotions and brain tricks, we usually end up in twice the trouble we would get into otherwise.

So you find yourself tallying up your girlfriend's faults and lusting after another.  Just confront this and figure out what is best for both of you.   Is the "new girl" going to fade from the scene in short order?   Are you better off with your existing relationship?   If not, is there a better way to break it off than by relying on your subconscious to sabotage the relationship?

Realize that your emotions are talking to you, but rather than act emotionally, act logically instead.

The same is true for our car scenario.   When you start tallying up all the faults of your current car, the real deal is that you want to sell it and get a new one.  Just own up to this and figure out what logically is the best thing to do.   The emotional side, if left to its own devices, pulls into a dealer on a whim, trades the car in without haggling on price, and then makes a very poor choice in vehicle and terms.  The logical side will do the research and compare prices and think about a late model used car instead.   If we can engage our logical half to help out the emotional half, we can come out ahead.
Newer Post Older Post Home
View mobile version