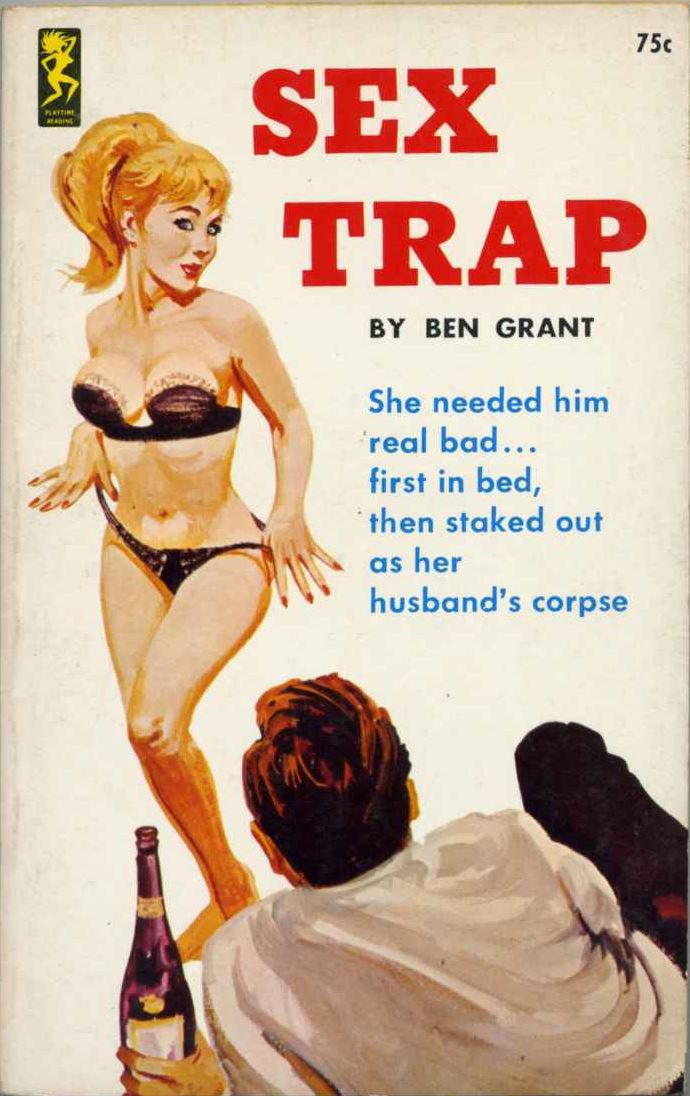 Religions, Governments, and Society have been using sex as a trap since time began.


The Sex Trap.   What is it?  How does it work?  The short answer is, it is how the powers-that-be try to control you by making you ashamed of your own innate and natural urges.
To parse this, you first have to have a general understanding of how your own mind works.  Most people don't.  Your mind is a neural network that is "programmed" by its environment, but also programmed by the powerful "initial conditions" that you inherit.

Simply stated, some of our behaviors are fine-tuned based on our experiences in life.  The brain is a neural network, that is trained over time, to provide certain responses as the result of certain stimulus.   But if that was all the human brain was, well, we'd be out of business in a generation or two.

Parts of your brain are hard-wired to resist attempts at learned behavior.   Your brain stem tells your lungs to breathe in and out.  Your upper brain can control this - up to a point.   If you try to stop breathing, well, Mr. Brain Stem takes over and forces you to breathe.

If you doubt this, then try it right now.  Yes, now.  Try to stop breathing.  Consciously, you can try to do this - and succeed for a few seconds or minutes, until a pressure builds up in your mind that forces the conscious mind to let go and let you breathe.   Even it if were possible to hold your breath until you passed out, the "passing out" would only be of the conscious mind, at which point, the brain stem takes over and starts cleaning up the mess you made.

In a similar manner, your sexual urges emerge from a very primitive part of the brain.   Without these, the species would not survive, and thus people with no sexual urges were quickly bred out of existence.  The urge to have sex - along with all the various "deviant" forms of sex - are perfectly natural.   Also perfectly natural is the urge to be abhorrent about sex.   The two opposite opinions can exist in the same time in the same brain.

This sounds confusing, but consider this.   In a typical civilized society, the idea of killing someone is abhorrent.  We abhor violence in any form, and killing is one of society's most proscribed evils.   But then war is declared, and suddenly, the idea of killing people is not only no longer abhorrent, but condoned and encouraged.   The person who does not kill in the name of their country is considered abhorrent - a coward - and is castigated by an entire nation.   Then the war ends, and the killers are welcomed home, but told not to kill anymore.   Post-Traumatic Stress Disorder ensues.

Or take cannibalism.  It is one of the most taboo subjects on the planet.   But if you are a member of the Donner party, or a Chilean Soccer player who crash-landed in the Andes - or a boy stuck in a lifeboat with a tiger named Richard Parker, suddenly things change.   You do things you need to do, in order to survive.  And later on, maybe you deny these things happened, or blame them on an escaped tiger.

Or take incest.  It's taught in the Bible - and condemned there, too.   At certain times during the history of our species, I am sure that entire families, tribes, or civilizations would not have survived, if not for incest. Of course, when other options for reproduction become available, then incest is abhorred and castigated.

Sex - and the abhorrence of sex - are both present in our minds at all time.  The sex drive insures the survival of the species, that is plain and simple to see.   But the desire not to have sex is just as important, as any species that spends all its time having sex will surely die from lack of nutrition or due to attack from another species.   The embarrassment or abhorrence of sex is just as natural as the desire to have sex.

And perhaps this explains the waxing and waning of homosexuality in human culture.  When cultures are well-populated and resources become scarce, perhaps the outlet of all this reproductive instinct (the primary network node of any brain) is diverted to non-reproductive activities.   In opposite situations, maybe the reverse is the case.   It is an interesting theory.

But beyond that, historically, using sex to control people has been a popular sport.   Everyone has sex drives, and if you can make them feel guilty about their sex drives then you can control their behavior.   Thus, most religions consider sex a "sin" and then go about telling you when and where it is appropriate to have sex.

The root message is, you are a no-good piece of sinning shit because of your innate drives, and if you just tithe enough to the church and pray all day long that maybe - just maybe - they might let you in their little club.

And what is amazing, is people go along with this line of bullshit.

Everyone has a sex drive, and yes, after you've had sex, it does seem kind of embarrassing (if you did it properly, that is).  So it is not hard to convince people that the strongest urge programmed into their brain is somehow wrong.  And once you can do this, you can control people to the nth degree.

Suddenly, ordinary humans are "sinners" and you, the preacher, can offer them salvation.

And sadly, many fail to see through this charade, and actually take this religious bullshit seriously and think they are somehow "damaged goods" because they have a natural sex drive.   There must be something wrong with me, they think, or I would not have these thoughts!

And what those thoughts are, doesn't matter.   The end result is the same.   We are shamed even for having "wholesome" sexual fantasies, even about the girl-next-door.

The minister rails from the pulpit, droning on about the evils of "sinners" and a young girl in the audience thinks, he's talking about me, because I have unnatural urges.   There must be something wrong with me.  I don't deserve to live!

And that girl tries to slit her wrists, at age 16, with her life ahead of her.  And that is a tragedy, because it is so unnecessary.    And that girl was my Mother.

Today, we have advanced somewhat.   Not everywhere in the world, or even everywhere in this country.   A lot of people grow up thinking that even "normal" (whatever that means) sexual urges are somehow evil or bad - but at the same time, everyone has them.  And the number of "Christian" ministers and right-wing Republicans who are caught with hookers or boys or in public restrooms, attests to this.  And perhaps pushing these sexual desires to the back of the mind and making them taboo serves only to make them stronger.

We still are in the slap-and-tickle stage of understanding and accepting our own sex and sexuality.   We giggle and get nervous even when the topic is discussed rationally.

So, what does this have to do with finances?  Just about everything.   So long as you go through life living a double or secret life - having sexual urges and then feeling guilty about them - you will be exploited in one way or another.   You will always be at the mercy of society and society's judgement, at the mercy of whatever religious blowhard decides to say what is "right" or "wrong".   You will always be exploited, manipulated, and marketed to - buying whatever Ramcharger big-dually quad-cab, diesel-powered penis-enlarger that they they can get you to buy, so that no one thinks you're gay.

So long as you go through life saying things like, "If my husband so much as even looks at another woman, I'll divorce him!" you are sure to be a lonely, bitter - and economically disadvantaged - divorcee.   When you try to negate the power of sex, or make it part of an ultimatum, you are sure to fail.  Because the sex drive is far more powerful than human consciousness.   Better off to embrace human frailty than to deny it.

It is like these priests, taking a "vow of chastity" - you might as well take a vow of "not breathing."  You can deny the lizard brain up to a point.   But eventually, he takes over, and the end result is, well, inevitable.

On the other hand, when you start to think about sex in the same manner as getting a haircut ("oh, is it time again already?") or perhaps brushing your teeth (a daily ritual)  then no one can manipulate or abuse you.  Because you don't feel bad for being human, and no one can tell you that you are bad.