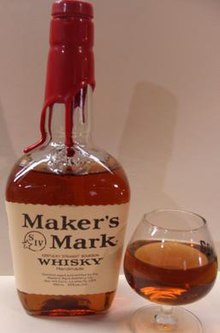 Kentucky Bourbon and Harley-Davidsons may be slapped with a "Chicken Tax" of their own.  This does not bode well!


On a trip to Japan, I was dining with a Japanese Engineer who had just returned from the States.   The Japanese Engineers back then looked forward to visiting America - choosing an American "name" to call themselves  ("I'm Yasumi, but call me Sam'!") and seeing what 米国 was really like.  All that changed when a Japanese exchange student was shot in Texas.   But that was so many shootings ago, wasn't it?

Anyway, after a few drinks, he went on about Maker's Mark whiskey, which he bought at the duty-free shop.  "It has wax all over the top!" he said in wonderment, "just dripping down!"   At first, I was a little confused by this, and then realized in Japan, such randomness would not be allowed.   A highly trained Geisha would use a feather to sculpt the dripping wax into the shape of a crane or something.   Random dripping?   That is so American - laziness, sloppiness, randomness, Rock and Roll!

Anyway, American products do have a market overseas, and often our American-ness is what sells them.   Sadly, the Japanese have engineered the Japan-like qualities from many of their products, particularly their cars, so they no longer have the flavor of the land of the rising sun.   But American stuff?  It is of unmistakable origin.  Whether it is rock and roll, large tail fins, over-consumption or a random attitude toward quality, you can identify American-made goods a mile away.

A friend of mine actually sells American-made shoes in Japan.  Each one is hand-made and stamped by hand inside with the company name and the shoe size written by hand.  The Japanese buy them up for $250 a pair - because they are hand-made and not "perfect" like everything else in Japan.   They are also comfortable shoes, too.  I have several pairs.

Some American companies rely heavily on exports to survive.  I was surprised, touring the Harley Davidson factory and Airstream factory to hear the tour guide tell us that a substantial portion of production of those American icons was destined for overseas.   A line of trailers build to Chinese and Japanese specs was awaiting shipment on the lot at the Airstream plant.  These are, of course, a luxury item overseas - a status symbol that says you can afford to pay too much for a motorcycle or a trailer.   But they mean big bucks for their American suppliers.

Harley-Davidson, I have written about before, and they are in trouble.  Sales are down and their customer demographic is aging and dying.  Younger people neither want nor can afford $25,000 motorcycles that are driven by guys with nicknames like "Hammer".  The whole mystique of the big, bad biker dude isn't translating to a new generation - at least not yet.   Airstream is riding the RV boom right now and expanding production, according to one recent article.   They are a nice looking trailer, but prone to clearcoat failure, dents, and leaks.  And they cost 2-5 times as much as a traditional "box" trailer as well.   If a recession comes.... well, it will be hard to sell $100,000 trailers to people.

Both Harley-Davidson and Maker's Mark in the news for another reason - our friends overseas are threatening to slap heavy import duties on these luxury goods in retaliation for a Trump proposal to tariff all imported steel and aluminum (even the steel he uses in his high-rise buildings, apparently!).  It is a tit-for-tat trade war, which is how trade wars always work.   Trump is bellicose, and announces he will slap import duties on this and that, but doesn't think that other countries will do the same in retaliation.

And this is exactly what has happened in the past - with various tariffs and taxes be imposed in response to one another, until commerce grinds to a halt.   And while it only takes days, weeks, or months to impose such tariffs, they can take decades to eliminate - if ever.  The "chicken tax" is still in effect, decades after that trade spat erupted into punishing tariffs on chickens and trucks.

It's not going to stop with washing machines, solar panels, or even rubber bands.   And it will get worse over time.   American Farmers are probably our biggest exporters, and they have the most to lose.  Yet farm income is down drastically in recent years, and over half of American farmers are forced to have a second job to make ends meet.   A spate of tariff wars could kill them off, completely.

And bear in mind, it was the collapse of the farm economy that predicated the collapse of Wall Street in 1929 - and the tariff wars ignited by the Smoot-Hawley Tariff act of 1930 that made the worldwide depression carry on for nearly a decade.