Cats Are Stupid, Dogs Are Worse. 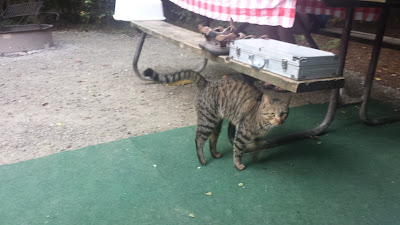 Why would a cat choose a feral life over being domesticated?  Why would a dog run until it was lost?  Maybe these instincts can tell us something about human nature.


While traveling by RV, we often run into feral or semi-feral animals at campgrounds.  In some cases, people "dump" unwanted cats and kittens or dogs and puppies at campgrounds, thinking that people will feed them (and we do, sadly) and thus they will have some sort of life.  But of course, as animals that have been domesticated for millennia, they are not well-suited for the feral life.  The expected lifespan of a feral cat or stray dog can be measured in a few years or even months.  On the other hand, a domesticated cat or dog can live as a pet for well over a decade, sometimes even two.

So why would a cat choose a feral life over sublime domestication?   Because they are dumb as stones.   We were in Vermont last summer and around midnight, heard a cat meow outside our camper.  I went outside to see a perfect tiger cat, sitting outside the camper, waiting for dinner.  He is pictured above.  So I brought it a paper plate with some shredded ham, along with a saucer full of cream.  He ate like he hadn't eaten in weeks.   He was a well-groomed cat, but a little slovenly at the edges from living in the wild.  He purred and rubbed against my legs.  I was able to pick him up - a sure sign he was someone's pet at one time - and he purred as a I rubbed his belly.  Feral cats do not like being handled, as they were not handled as kittens.

I left the camper door open and he came right in, jumped up on the bed, and curled up with Mr. See.  Mark woke up and was somewhat surprised to see this purring tiger cuddling with him.  "Who is this cat?" he asked.  "I've decided to call him 'Hero' - since we are near North Hero, Vermont!"

I went to close the door and "Hero" jumped up and ran through the gap.  Free food and cream and cuddling was fine and all, but he wasn't about to be domesticated.   I speculated that he was someone's pet - someone who foolishly decided to take their cat camping.  Cats generally don't like traveling in cars, and often will run from a car as soon as you open the door.  I suspect "Hero" escaped from someone's car at the campground and ran as fast as he could.  The owners called for him for days, and then finally had to go home.  The same thing happened to my sister, traveling from Boston to Colorado in her Volvo in 1973.  She let the cat out at a rest stop and it ran as fast as it could.  Five hours later, no cat, and they had to leave.  Another feral cat living at a rest stop.

The problem for "Hero" was that he hated cars so much that he did not want to be trapped in an RV or car.   So he would never allow himself to be adopted by some other camper - such as ourselves.  We realized, after three days with "Hero" visiting our camper for more food and ham, that he would never come home with us.   He would choose the feral life over domestication.

And what we were offering him, of course, was a chance to live in a comfortable house, have regular shots and inoculations, medicine and health care, all the food and drink he could stand, and someone to scoop his shit out of a box twice a day.  Oh, and he could expect a life expectancy well into his teens - maybe his early 20's as two of our cats achieved.  The more I thought about it, the more I thought it was a pretty raw deal for the humans involved.

But "Hero" would have none of it.  The feral life was for him!  He didn't appreciate what a coming Vermont winter would bring.

We are in Florida now, and the first night at the KOA, a small cat comes out from under a neighboring RV, curling around our legs and begging for food.  I give her cream, which she loves, and some ham and cheese - but apparently she's keeping kosher, or perhaps vegan.  I name her "Hollywood" since we are near there.   Once again, the same pattern emerges.  Clearly an abandoned pet who likes being handled, she still is too skittish to be adopted by humans. 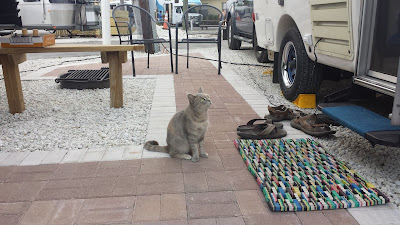 And why should she?  Living in an RV park means a never-ending supply of patsies who will take pity on her and give her free meals and an occasional pat on the head.  All she has to do is mew and purr and rub against a leg - and voila!  Free meal!  Why be domesticated when being "free" is so much better?    But of course, a cat isn't making that mental calculation - or is she?

Maybe after being abandoned once, she doesn't want to risk abandonment a second time?  Or maybe it is just more fun to live under a trailer in temperate Florida, than to be confined to a house and one family?  Or maybe cats are just too stupid to grasp a good thing when they see it.

Dogs are not much smarter.   Dogs often will run away or get lost from their owners, and often can't find their way back home.  Despite the stories and movies you've read about dogs traveling thousands of miles to be reunited with their owners, the reality is, most dogs get "lost" only a few blocks from their homes.  Despite their reputation as tracking hounds, most dogs don't have enough common sense to come in out of the rain.  When let out of the confines of their back yards, many will just wander off in random directions, chasing an occasional squirrel or cat or whatever, until they realize they are tired, hungry, and thirsty, and their owners are nowhere to be seen.

And it is sad.  They end up in the pound or shelter, and the odds of them being reunited with their owners is maybe 50/50 at best.   Dogs have a good thing going - getting three squares a day and all the shoes they can chew - and yet they blow it the first chance they can dig a hole under the fence, by getting lost and never finding their way back.

(Our first dog, Maggie, a lab/chow mix, would have run off chasing a squirrel and gotten lost at the first opportunity.  And indeed, in Nova Scotia, we nearly lost her when we let her off the leash and she chased after a deer.  Ginger, our greyhound, on the other hand, knew a good thing when she saw it, and rarely ventured more than 20 feet from our sides.  Greyhounds are sometimes smarter than even humans.)

So what does this have to do with anything?   Well, humans aren't much smarter than cats or dogs.  Many humans, given the chance, would rather live under a bridge, provided they can have all the cheap beer and drugs they can consume.  And with a few hours of panhandling, they can often finance this lifestyle.  Or maybe a few hours spent stripping the copper coils off your air conditioner will suffice.  People will revert to a feral state if allowed to do so.  The veneer of civilization is indeed, very thin.

When we were living in South Florida, we used to drive our boat down various canals.  One went under a bridge under Route 1.  Some homeless guys were living there in a primitive camp made of found furniture, some broken-down tents, and whatnot.  They would ask us for beers when we drove by in our boat, and we would throw them a few cans - which they were adept at catching!   They had a lifestyle there that was, in some respects, envious.   Their life expectancy, of course, was severely shortened.  But they didn't have to be domesticated.

And this is the problem for people who actually have to deal with the homeless, as opposed to self-appointed "homeless advocates."  The latter would argue that the cure for homelessness is a firehose of money, preferably directed at their non-profit organization.    But of course, these "solutions" to the problem of homelessness - which is a problem of mental illness as well as drug use - fail to address the underlying causes.

Not every cat wants a warm lap to sit on, or a warm fireplace to curl up next to and nap - not when living on the street can be not only comfortable, but leave you with a sense of freedom and lack of obligation to anyone.   And while dogs are more like pack animals - and want to bond with humans more than cats do - they will wander off their leash at the first opportunity and end up lost.   They just aren't that smart.