Whatever Happened to Matthew Lesko? 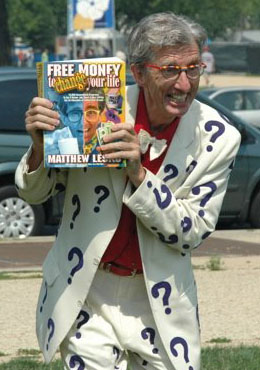 Whatever happened to this guy?


I was reading one of my earlier blog postings, which analyzed the "extreme retirement" website - which is selling a book, of course.  And it struck me the scenario was similar to that of Matthew Lesko.  They sell the idea that you can retire early on not a lot of money - $7000 a year, according to one source - which I think is over-selling early retirement just a wee tiny bit.

Lesko might be a little bit before your time, but if you had cable TV in the 1980's, you saw his annoying commercials and infomercials more than once.  Back then, before cable really was big, you could buy informerical time late-night for hardly anything.  It was a wild, wild west and made millionaires out of the likes of Ron Popeil.   Lesko pranced around on the screen in a Joker-like suit with question marks all over it.  He promised - if you bought his book - to tell you how to get all sort of "free money" from the government.  He made a lot of money selling these books, to be sure.  But some government agencies were not so keen on his claims.

Yes, it is true that the government "gives away" money to people, but in order to get this money, you usually have to qualify or do something to get it.  If you are poor, yes, you can get food stamps, subsidized housing, TANF, an Obamaphone, and whatnot (although many of these programs do have work requirements).   But you have to be poor - the money isn't there for the middle-class unless you are going to commit fraud on the government, which is not recommended.

Similarly, other "grants" and programs are very narrowly tailored to specific groups.  My hippie brother uses NEA grants to put on his little "I hate America" puppet shows - your tax dollars at work!  Other types of grants and programs are available out there - from the government or from the private sector.  The money isn't "free" however - you actually have to do something to get it and use the money for a specific purpose.  You can't just ask for free money for a new Porsche - that's what gofundme is for.

So people send off for the book, making themselves a little poorer and Matthew Lesko a lot richer and they read the book and realize that most of it, if not all of it doesn't apply to them.   So they put the book aside and move on with life, maybe realizing that the something-for-nothing mentality is never true, and there ain't no such thing as a free lunch (TANSTAAFL!).

Is Lesko doing anything wrong or illegal?  Hell, no!  He's just taking publicly available information and putting it in a book.  Maybe some consumer agency thinks he is over-selling it a bit, but hey, if you bought a book from him, based on his loud and annoying commercials, from a guy in a clown suit, who do you have to blame but yourself?

Again, from 100 paces, you can spot this as a bad deal, just from the way it is marketed.  Loud, annoying saturation advertisements?  Check.  Clever marketing gags designed to get your attention?  Check.   Wild claims that sound too good to be true?  Check.   Telling you what you want to hear, rather than what you need to be told?  Check!

You can become quite wealthy in America by taking a little money from a lot of people.  So selling a book like this is quite lucrative - those infomercials weren't cheap, that's for sure!   Each customer pays a little - an amount they can "afford to lose" - but the guy selling the books, seminars, or whatever, makes a lot.

So whatever happened to Matthew Lesko?   He was investigated, apparently in 2004 by the New York Department of Consumer Affairs, which issued a "warning" about his claims, but not much else happened.  His Wikipedia page seems carefully groomed to minimize controversy.  After all, selling books isn't illegal in America - yet.

He is still selling his books, from what I can see, but I think he is using the far lower-profile and lower-cost Internet, rather than the late-night informerical, to sell them.  Informercials have gone mainstream and are a lot more expensive today than in the early days of nationwide cable.

Is there anything you can glean from these books?   As Lesko himself says, they are basically information from government pamphlets you can get for free:

In an interview with the Washington Post in July 2007, Lesko admitted having assembled his books from government guides to grants and loans: "His business model is simple: 'I get stuff for free and I sell it for as much as I can get.