Fools And Their Money 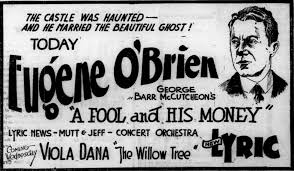 " a fool and his money are soon parted" --ancient saying.

A recent article in Fortune Magazine illustrates the old adage that a fool and his money are soon parted.  The article posits that people are selling off their gold hordes in order to buy Bitcoin.  The person they profile on the article almost seems like a caricature of the financial antics of the last decade:

“I got foreclosed on in 2011. The banks weren’t really working with me to come to a resolution. I was just laid off in 2010. It just snowballed,” he said. “I kind of had a distrust of banks and the monetary system.”

The unfortunate soul admits that he lost his home to foreclosure in 2011 after he lost his job.  He then resorted to buying and selling things on eBay and investing his profits in gold which of the time was going up.  Of course, since then gold has reached a peak and then sort of flattened out after dropping about one-third from the peak price.

And now this poor soul, who was caught up in the real estate bubble and then the gold bubble is now investing in the Bitcoin bubble.   I'm not sure what the point of the article is, other than to put up a catchy headline and hope that we all click on it.  And apparently like an idiot I clicked on it as well.

Of course, one wonders why it really matters that people do foolish things with their money.  On an individual basis, the person squanders their hard-earned cash, it really doesn't affect other people that much.  But when the vast hoards of people start to do moronic things with their money, it can affect our society as a whole.  When these people end up destitute, they will petition the government for relief, which will grant it.  Politicians want votes, and if most people are destitute, then they will garner votes the oldest possible way in the book - by buying them.

But more than that, a society where the vast majority of people have squandered their cash through spurious investments is an unstable society.  People threw away their money with starry-eyed dreams of avarice and riches and now are bitterly disappointed.  And they want somebody to blame for their misfortune - someone to blame other than themselves.  So you see a whole new generation of people coming up, blaming the government for all of their woes when in fact they should be looking inwardly at their own actions.  No one forced them to buy a mini-mansion and finance it with funny money.  No one forced them to refinance their house three or four times and take cash out.  No one forced him to buy gold or Bitcoin.  In fact, people warned them that all of these things were probably bad for them, and yet they ignored these warnings, thinking they were smarter than the experts.  And I guess we're supposed to feel sorry for them now?

The other problem with the vast majority of people investing in bad things is that it tends to affect the rest of us who invested in smarter things. When markets crash, they take down overall markets not just the bad investments.  We saw this in 2009 when the overall market crashed even though the real problem was mostly mortgage-backed securities.  Of course, the better investments recovered very quickly and the real stinkers went off into oblivion.

We are seeing the same thing today with the volatility in the marketplace.  People invested in these so-called VIX-based products which were not a bet on even share price or the direction share prices were going, but rather a bet on the overall volatility of the market.  So long as the market remains stable, these people reaped fairly generous rewards.  As soon as the market became unstable - even for a moment - their carefully laid plans went awry.  And this triggered a sell-off of assets including worthwhile assets which created a cascade effect.  And it is not clear that this sell-off is by any means over.  As voltality increases, more sell-offs will occur. The thing starts to feed on itself.

And what was the cause of this?  Greed.  Greed, plain and simple.  People weren't content to just buy a stock and hold on to it and receive dividends and see it gradually appreciate in value.  They wanted to bet on the market, hoping to reap huge rewards like lottery winners, from very small bets.  And this drove the market to extremes.  And what's really sad about this is we saw this not even a decade ago, with the market collapse after the previous run up.

Back then, it was houses.  People thought they were going to make lots of money buying and flipping houses or that their own personal residence was some sort of new gold mine.  And no one bothered to think otherwise, because thinking otherwise wasn't as much fun.

And it all blew up and they looked around for other things to invest in.  And all these new tech companies started coming out and offering IPO stocks, which were sure thing to make millions.  And people who invested in those, for the most part, lost their shirts.  So then they floundered around looking for something else to invest in, as they were starting to run out of money and needed to make huge amounts of returns for very small investments.  And they saw gold was going up so they all started buying gold.  The lucky ones nearly doubled their money after nearly a decade.  The unlucky ones saw their investment cut in half with the drop from the peak.

So, as you might expect, they start looking around for something else, and they found it in Bitcoin. Again the siren song of huge profits with no effort or work or risk - and sirens always lure sailors onto the rocks.

It's really hard to feel sorry for these people, and what's more it's very easy to feel angry with them. Because not only are they screwing up their own lives but they're messing it up for everybody else. When their half-ass schemes of avarice go bust, they take down the overall market and hurt the rest of us.  Now of course, the rest of us who invested in sound rational things will see our portfolios recover in short order.  But that is cold comfort for the person who has to sell today after the market has gone down instead of the day before or the day after when it goes up.

And this is one reason why we've had regulated markets. Not only do regulated markets protect individual investors for their own folly, they protect the rest of us from the periodic bubbles and crashes that hurt the rest of our portfolios.  Regulation is not a horrible thing despite what Republicans try to tell you.

Republicans are against regulation based on almost religious-like views.  That, and the fact they're paid heavily by lobbyists for companies to make a lot of money out of market volatility.  There are people in the marketplace who make a lot of money selling you crap during these bubbles and then clean your clock when they collapse.  They don't want to see the market stable and steady as it was during the eight years of Obama.  In fact they decry the slow and steady growth during the Obama Administration as some sort of horrible aberration.  Anything less than 3% growth was just stagnation!

And now only one year into the Trump Administration, we seen dynamic growth in the marketplace - growth it was really not justified by any sort of metric. And just as quickly as this growth is accelerated it seems to be collapsing.  One starts to wish for the good old days of the Obama administration where you can put your money in the bank and expect it to be there the next day.