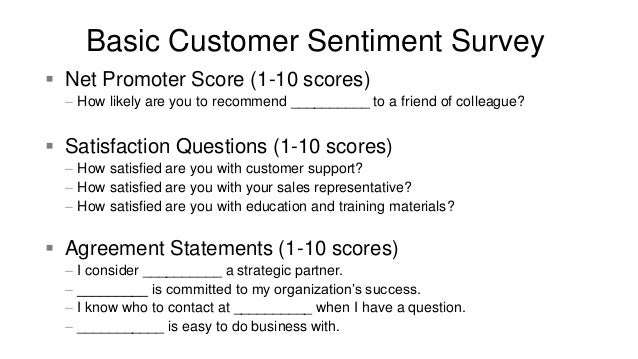 Managers are using surveys to justify raises and bonuses for themselves.  Do us all a favor and answer your next survey with all "1's" - maybe it will put an end to this nonsense.


In an earlier posting, I opined that a lot of these consumer surveys are a lot of hogwash.   Companies use surveys as a means of "engaging" customers to get them to come back to their store.  Amazon asks me to "review" a product or purchase experience, and after the survey or review, helpfully suggests more crap for me to buy.

Sociologists working on their PhD's use surveys to concoct data to support their pre-existing notions.  Politicians use them to bootstrap the policies they've already decided on.   Surveys are rarely accurate and often wildly inaccurate.  They should be taken with a grain of salt, and whenever someone uses survey data to make an argument, beware - you are about to be snookered.

A recent Wall Street Journal article exposes one reason why there have been an explosion of surveys in recent years.   People's bonuses and pay raises are based on these surveys.   This is why, when I am at Wal-Mart or Lowe's, and I compliment the cashier or act happy, they hand me the receipt and say, "There is a survey link at the bottom of the receipt.  If you take the survey, you are signed up for a chance to win $1000!"

On the other hand, if I act surly or indifferent, they just hand me the survey with no comment.  They don't want all 1's on the survey, or even 7's.

What is going on here?   Well, as the WSJ explains it, it is a new management fad called "Net Promoter Score" and it is a sign of the coming apocalypse in retail and our economy in general.  All of these store surveys have one question in common - and it is the main question - "How likely are you to recommend our store/product/service to a friend?"    And while this is good information to know, I suppose, it is not as an important a metric as, say, profitability.   Yet many managers and even executives are being paid bonuses based on this metric.   I can only say, from now on, I'm giving all these self-serving surveys ones or zeros, or whatever is the lowest score.   They really don't care about my opinion, they only care about getting paid.

And now I understand why the Ford dealer was willing to bribe me $189 to change my survey response from 1's to 10's - they lose a bonus If their survey results go below a certain level.

What this is, is just another in a long line of shitty management practices.  And each of these shitty management practices usually pre-dates a major recession.   The WSJ article mentions "Total Quality Management" or TQM as they called it, and I lived through that fad at GM and UTC.   We would have these big meetings with lots of powerpoint (or back then, overhead projector) slide shows, exhorting us to have "total quality" throughout the manufacturing and development process.   What this meant or how to achieve it, was never stated.  And like with most motivational speakers, you leave these cheerleading sessions with a vague feeling that somehow you aren't doing your job right, or that the company's problems are somehow your fault.

The real reason GM's cars slid downhill in quality wasn't some lack of effort or people being lackadaisical, but rather the narrowing profit margins in what quickly became a very competitive worldwide business.  With aging factories, unfunded pension and healthcare liabilities, high union pay (2-3 times prevailing wages) and a bloated and overpaid management structure (2-3 times larger than our Japanese and European competitors and paid 5-10 times as much), something had to give.

And rather than do hard things, like cut salaries, lay off excess management, close unprofitable factories, and get tough with the unions (as GM is doing today) they just cut the content of the cars.   Cheap plastics replaced soft vinyls.   Corporate engines were used across the product lines - making one model car indistinguishable from another.  Granted, quality improved compared to the cars of the 1950's and 1960's which rusted out in a matter of 2-3 years and rarely lasted a decade.  But compared to our overseas competitors, we were far behind.

After "TQM" came something called "ISO 9000" which involved more meetings, powerpoint presentations, and hefty checks made out to "ISO 9000 consultants".  And once again, it left employees with vague feelings they were supposed to be doing something about this ISO thing, but they were not sure what.   It turns out, the whole ISO 9000 thing (and its successors) was just a bunch of hooey.   As Dilbert put it, "We just document everything we do, put it in a big honkin' binder, and put it on the shelf!"    ISO 9000 consultants then "certify" your business, which means, of course, that you are qualified to do business with other ISO 9000 customers.  It also means that all of your suppliers must be ISO 9000 certified, in order to to business with you.   It is like an MLM scheme on steroids - how did people fall for this nonsense?   Nothing got done, nothing got better, no money was made - other than for consultants.   This sort of crap is just utter nonsense, cloaked in shitty management double-speak.

All the "customer satisfaction" surveys in the world wasn't going to change this - nor was "Total Quality Management" or "Work Smarter, Not Harder!" or whatever other snake-oil the management consultants were selling to weak and overwhelmed managers.   Hey, maybe if we made all the machines in the factory less than five feet high, we can trounce the competition from Germany and Japan.   Yes, this actually happened.  Yes, the manager who did it was promoted.

When management just gives up and starts selling snake oil, bad things will happen in short order.  When managers start tying their pay to arbitrary criteria instead of profit-and-loss, then profits will shrink and eventually disappear.  One reason managers do this sort of thing is that they can't make a profit - either because of circumstances beyond their control, or because they lack the talent or the fortitude to make hard decisions and choices.

The Ford dealer who tried to bribe me to change my survey results could have achieved better results just by treating their customers better.   But that is the conundrum for any car dealer - you often make more money by being shitty to your customers, selling them cars for inflated prices with crappy financing, unneeded aftermarket accessories (undercoating, paint protector, extended warranties, etc.).   Customer satisfaction means little or nothing to them - most people never return to the same dealer twice in a row.  Since most customers are so browned-off by their car-buying experience, they will buy a car from every other dealer in town before coming back to yours.  So you might not seem them ever again, or at least not for decades.

Car dealers know this, which is why "customer satisfaction" means little to them.  Oh, sure, maybe a few feel that return business is important - and some salesmen try to cultivate return customers, particularly with lease deals.   The guy who sold me the hamster calls once a year or so to see if I want to trade it in (after four years, it has 20,000 miles on it - worn out!).   But for the most part, car dealers are like a slaughterhouse - the cows go in one end and come out the other as hamburger.  Not many return customers there!

The problem with these surveys is that they can be spoofed so easily.  The salesman at the KIA dealer, for example, told us that KIA would send us a "customer satisfaction survey" in a week or so, and we should fill it out and give "all 5's" (the highest level on that survey) as "anything else doesn't count."

And he was right, according to the WSJ.   A "satisfactory" response in the middle is not counted at all, and the vaunted "Net Promoter Score" is based entirely on adding up the number of high scores and subtracting the number of low ones.  The problem with this approach is that scores of "outstanding" are becoming the new norm.    It is like grade inflation in school.

For example, I bought a plastic rock online from Lowe's recently.  These fiberglass rocks look real, but you can use them to cover up your sewer cleanout pipe in the middle of your lawn, or a wellhead or whatever.   I ordered two of them, paid for them, and they delivered them.   They did a good job of sending confirmation e-mails and order updates, and using FedEx to send tracking updates.   Years ago, this would be considered "outstanding" service, but in this Amazon age, it is considered baseline.   Everyone expects everything in a day or two, at most.

This is far different than a few years ago.  eBay used to be ordinary people buying and selling things - mega-sellers and storefronts didn't exist.  So you bought something from some schmuck like yourself and it didn't show up.   You e-mail the seller and they say, "oh, sorry, I had to go to aunt Hattie's funeral this week.   I'll be sure to get that in the mail to you next week."   That level of "service" would be unacceptable today, which is probably why eBay is courting mega-sellers and storefronts, and discouraging individual sellers - as I noted in another posting.

Anyway, getting back to Lowe's, of course, they sent me a survey, and smack dab in the middle of it was the "Net Promoter" question.  The service was what was expected, and on a scale of 1-10, would be a solid "5" in any normal world.    But in the world of today, it is 9 or 10 or go fuck yourself.   The term "mediocre" used to mean average or acceptable, but today it means shitty or crappy.   Average is bad, we are told, everyone has to be above-average, like in Lake Wobegon, which of course, is physically impossible.

There is, of course, an Achilles heel in this "Net Promoter Score" nonsense, in that is, now that we consumers are aware of the game (thanks, WSJ!) we can spoof it.   At the very least, you can decide simply not to respond to these surveys or if you do, give all zeros or ones (or whatever the lowest score is) and in the "reasons why" box, state that you are not going to participate in this corporate malfeasance.

Of course, that might mean some mid-level schmuck loses a pay raise because of this.  So I guess that could be mean-spirited.   Maybe an alternative is to give all 7's - which means your input basically is discarded.   I guess there is no real way of winning in these gigs, just as we couldn't win, as employees, with "Total Quality Management" when management cuts the budget for real product quality, in order to hire a motivational speaker to lecture us on quality.

Like I said, this nonsense seems to occur before a major recession.  Eventually these management "solutions" fail and companies fail and it all comes tumbling down.  Only then do people focus on the real game - profits and losses - and the management consultants, motivational speakers, and other gurus are sent packing.
Newer Post Older Post Home