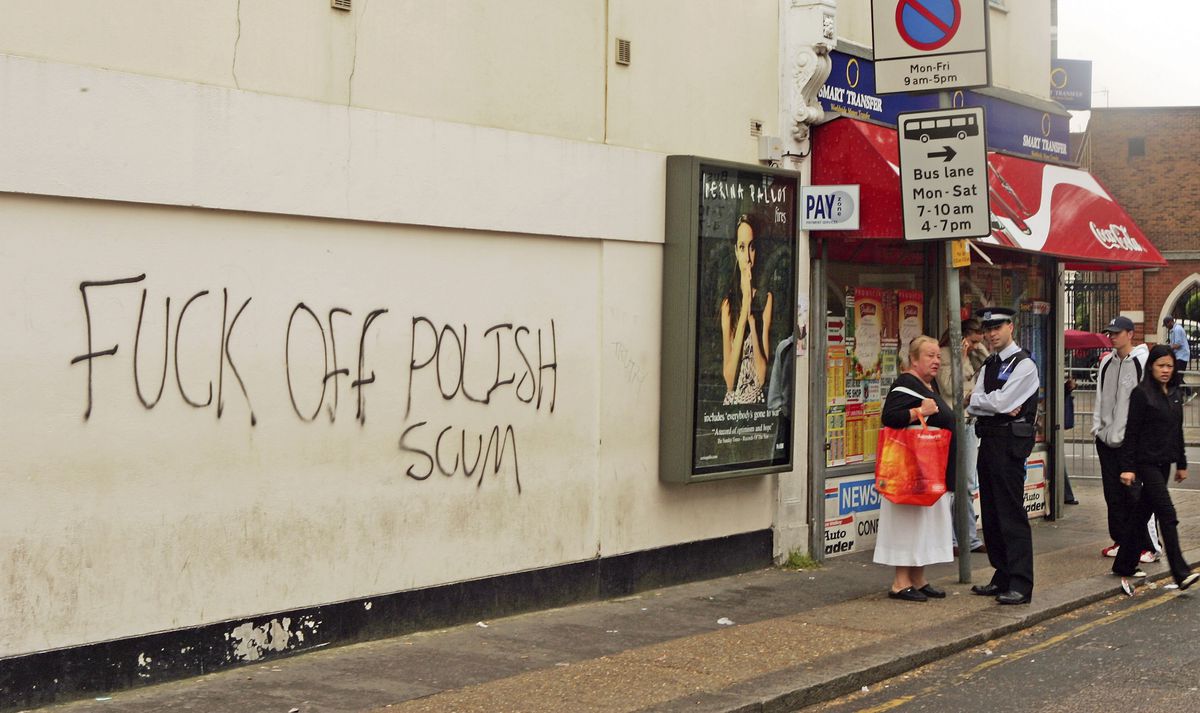 Nationalism and Conservationism are not just phenomenons in the United States, but worldwide.

In a recent Op-ed article in the Washington Post, a writer opines that if things get much worse in America, he is going to move overseas.  He is tired, he says of the xenophobia and saber-rattling in the United States.  But the punchline is the place he wants to move to is the United Kingdom.   Good thing there's not a lot of xenophobia in that country!  Oh, wait... Brexit.

There is a mythology on the left that the election of President Trump is some sort of American aberration.  But if you look at what's going on worldwide, you see that this move to the right is not limited to the United States, but is in fact prevalent worldwide.  Nationalism has taken hold in many countries across the Western world - and some of the Eastern as well.

This is not to say that conservatives and nationalists are in the majority, only that they are on the ascendancy.  Recent elections in the European Union have shown gains for nationalist parties.  And of course, in the United Kingdom, the Brexit movement is an ultimate expression of nationalism - rejecting the internationalism of the European Union in favor of God, Country, and the Queen.

Similarly, many people on the left argue that the issue with migrant caravans on our Southern border is somehow unique to the United States.  But yet this migrant issue is one that is occurring worldwide.  People are fleeing war-torn and impoverished 3rd world countries for a better life in Western countries.  Not only are migrants coming to America, but also to Europe and even Australia.

It seems that every Western country is having to deal with this migrant influx problem, migrant detention camps, and treatment of migrants.  And it is a tricky question.  Do you send these people back to where they came from, do you grant them asylum and citizenship - or at least a green card? Do you provide them with food, shelter, and clothing?  It seems like the humanitarian thing to do - or by doing so, do you attract more migrants?

Western democracies have historically been very generous in trying to help out displaced peoples. Of course, there are exceptions to the rule, such as back in 1942 when America sent back a shipload of Jews after refusing them entry into the United States. They all ended up dying in the concentration camp. We're not very proud of that moment.

But of course, back then we were not alone in this migration problem.  Many other countries also refused refuge to Jews, or were actively involved in persecuting them.  It seems that these waves of liberalism and conservatism follow one another throughout history.  People and societies go off in one direction until they go too far, and then the swing occurs in the other direction.

And like with a rubber band, The more you pull back in one direction, the more it's going to hurt when you let go.  If a pendulum swings wildly one way, it will swing wildly the other.  And today it seems that people want this swing effect.  Ultra left-wing liberals who are advocating things like slave reparations, guaranteed annual income, debt forgiveness, free college, and whatnot are hoping that right-wing leaders will be elected and enact extremist policies so that their liberal solutions will appear rational in comparison.  They secretly hope that the economy will melt down so that people will grasp for any lifeline.

Sadly, the swinging pendulum effect means that nothing actually gets accomplished.  On the far right, whether it's in America or in Europe or Australia, people argue that migrants should be shut out of their country.  Countries that were formerly considered liberal such as the Nordic countries are finding out, with alarm, that they are no longer monocultural.

It always cracks me up when someone from a monocultural country criticizes the United States.  My friends in Sweden in Japan will tisk-tisk while they muse about the racial problems in the United States.  But until recently, Sweden was 100% blond-haired and blue-eyed and Japan was 100% Japanese.  You don't have many racial relations problems in countries that are all of one race.

It's also a lot easier to get everyone to pull in the same direction when they have the same cultural and social values.  Thus, a lot of far left-wing social programs will work in countries where everyone is alike and thinking on the same page. You can provide cradle-to-grave socialism in a country like that, because people are motivated to work by cultural values.  If you have a diverse culture, and have segments of society that don't have those values - people who feel perfectly acceptable living off society - the entire thing falls apart in short order.

In that, in a nutshell, is why America doesn't have generous social welfare policies and programs as many of our European neighbors do.  We are a multicultural society and an immigrant society, and not everyone believes in traditional American cultural values of hard work and perseverance.   If we created a European-style welfare state here, half the country would go on the dole.

With migrants, the problem is even worse.  Many don't speak the language or have any job skills that a modern industrial Western country can use.  Somebody walks all the way from Somalia and then swims across the Mediterranean and arrives in Europe - then what are they going to do? They can do little more than go on the dole and live in an apartment and watch television all day long.

With no technical skills, they only qualify for the most menial jobs. They see others around them with apparent wealth and become incensed.  As a result, they turn toward radicalism such as radical Islam. And this is what we've seen in France, where are legions of unemployed Algerians have settled in that country and some have turned to radicalism as a means of salving their discontent.

While the right-wing has made advances in Europe and America and other Western countries, they still don't represent the majority of opinion.  But then again, conservatives rarely do.  And in particular, the far-right never represents popular opinion. The Nazis came to power not with a majority, but with by force.  And many people are willing to go along with this because the alternative - Communism - was considered far worse.

Across the Western world, people are embracing right-wing politics not necessarily because they believe in fascism, but that they see that liberal democracies have failed them.  When liberals promote ideas like open borders and free asylum for everyone, many people get nervous.  When liberals promote ideas like free money for everyone, many more people get nervous, particularly those who are paying taxes.

And that is the conundrum right there. In an era where far-right politics are in the ascendancy, far-left politics are also finding great currency.  All of the ideas pushed by Bernie Sanders are not novel, but are similar things that are being discussed in Europe.  Many countries are "experimenting" with guaranteed annual income, which is to say they are taking people's money away from them and giving it to randomly selected people as an experiment.

If you were to go back in time to the 1950s and tell people this is what would happen in the next century they wouldn't believe you.  "What do you mean you're just randomly giving money away to people?" they would say, "That makes absolutely no freaking sense whatsoever!"  What would make even less sense to them was the idea of giving everybody free money.

So, in the same pattern as we saw in the past, I think the conservatives will achieve gains in the near future not because people find their programs have great currency, but rather that the alternative is so outrageously liberal that they are at least willing to go along with a more conservative government to avoid the liberal alternative.

And this is true not just the United States but in Europe, Australia and elsewhere.  This is not a national, but a worldwide trend.

Thus, the idea that you can move away from the United States and get away from these trends is somewhat laughable.  It's also very childish, this sort of temper-tantrum politics, where the author is threatening to leave the United States unless people elect a candidate to his liking.  Many people have threatened this in the past, claiming they will move to Canada if Bush was elected or Trump was elected or fill-in-the-blank was elected.

But when push comes to shove, most remain in the United States, or the ones that move to Canada find it's not all that much different.  In fact, it seems that most of Canada lives in the United States half the year, or at least that seems to be the case, judging for the number of Canadian license plates we see driving by our house on I-95.

And then there is the other irony.  If this young man decides to move to the United Kingdom to escape America, not only will he find the same politics going on there, but he'll find himself another unwelcome refugee in that country.  While most Britons are very courteous and welcoming people, there is a loud minority of xenophobes that will undoubtedly make him feel uncomfortable on more than one occasion.

Maybe - just maybe - the solution isn't to leave your country or to vote for extremist politics of one kind or another.  Perhaps maybe a more centrist moderate government that embraces realistic solutions instead of right-wing or left-wing jingoism is the answer.