Should We Feel Sorry For The Homeless? 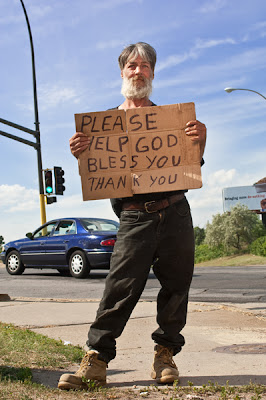 Someone craps on your lawn, leaves dirty needles on the sidewalk, and then breaks into your car.  Are they the victim or the perpetrator?

A recent article online tells of a Target store in San Francisco locking up the tents behind glass cases, because they were being shoplifted by homeless people.   What is interesting about this story is that people take away two lessons from it.  The first group - the self-righteous shamers - posit this as a "mean" act by Target.  After all, the homeless have to have somewhere to live, right?  And shouldn't Target provide free tents?

The rest of us, who are more rational, realize that a computer program at the Target main office detected abnormal "shrinkage" in the camping department and issued an order to lock up these high-theft items.   In different stores, different items are locked up, depending on shoplifting trends.  You can't blame a business for trying to prevent theft.  Or can you?  Some folks would argue otherwise.

The article goes on to state:

In San Francisco, an estimated 7,499 people were homeless in 2017, according to a point-in-time count. The city has long run out of shelter beds to keep them. Tent cities are forming in alarming numbers, spreading from parks and underpasses to tourist-magnet neighborhoods.

The Target Metreon store is located in a neighborhood that's close to the Civic Center and the Tenderloin — where needles, garbage, and feces are found in concentrations comparable to some of the world's poorest slums, according to a report from NBC Bay Area.

In December, the San Francisco SPCA, an animal welfare group, put a security robot to work outside its facilities in order to prevent homeless people from setting up camps along the sidewalks. The group said the number of camps dwindled and there were fewer car break-ins.

But the move drew sharp criticism from people who said the SF SPCA showed a shocking lack of compassion for its homeless neighbors. The group quickly pulled the robot from the streets.

We are seeing a rise in diseases like cholera and dysentery in the United States because drug addicts are living under bridges and shitting on the ground.   And we are told there is "nothing we can do about it" because anything other than sending a firehose of money to some non-profit group is just plain "cruelty."

According to one recent story, San Francisco is proposing hiring people to go around and clean up shit left by the homeless.  And by shit, I don't mean their garbage, but fecal matter.   Sounds like a fun job - and a neat way to make $184,000 a year.  And people say there are no opportunities left in America today.

But what about the homeowner who is struggling to pay a mortgage and raise a family?  The guy who goes to work every day and doesn't do drugs, whose kids are finding needles on the lawn?  Well, fuck him, the bourgeoisie middle-class schmuck!  That's what you get for playing the game by the rules.

I mentioned before in my posting about Cats and Dogs - as well as squirrels - that people are like animals, and will revert to a feral state when offered the opportunity to do so.  We all will wallow in our own crapulence if allowed to.   It is the need to make a living, pay our bills, and conform to "society" that force us to get up every morning, shower and shave and get dressed and act like normal human beings.

But some folks, either due to mental illness or mental weakness, just say "fuck it, I'm going to live under a bridge, steal shit, and do drugs all day long!"  And you can feel sorry for them, but to some extent, they are making choices - or at least some of them are.   I think for too long, we have used this canard of "addiction" to give a pass to people and let them do just whatever the hell they want.

And 12-step programs are not much help.  Even the "success" story from the 12-step program emerges as a crippled adult, complete with an excuse for his behavior, the moment he decides to "fall off the wagon" and basically annoy the shit out of everyone else.  Yes, kicking a drug habit can be hard - but not impossible.  People do it all the time - often without expensive "treatment centers" which cater to the need for attention.

As with mental illness, often the "cure" for addiction is to throw gasoline on the fire.  As I noted in another posting, mentally ill people are often very selfish - viewing the rest of us as wallpaper.  The "cure" of psychotherapy is to have the patient sit down with a doctor and talk about himself for an hour - more introspective thinking, rather than external thinking.   I've known several "crazy" people in therapy, and it always seemed to me that the therapy made things worse - it fanned the flames of narcissism even further.

"Re-hab" works the same way.   Who doesn't want to go away for a three-week spa vacation?  You get all this attention, special treatment, and you are the victim here.  When you get out, well, boredom.  No one pays attention to you, now that you are "cured".   So you re-lapse, and maybe this time, some friends and family members will stage an intervention!  Some fun!

I don't think it is a bad idea to be strict with people and to set rules and boundaries - people actually crave boundaries.  It is OK to tell people the can't live under a bridge and shit on the sidewalk.  Our rights as citizens trump their rights to be drug addicts. And if this means institutionalizing them or jailing them, so be it.  If you can't take care of yourself, then the State should take care of you.

Or, we can let a tiny minority of people just do whatever the fuck they want to do, and the rest of us have to pay the price in terms of disease, crime, lower property values, and unsafe streets.