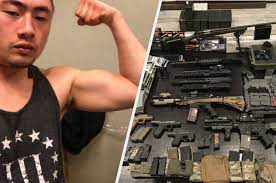 
Another bizarre twist on the protests and riots going on, a young Asian man was charged with firearms violations after attempting to drive his pickup truck, adorned with Trump flags, through a crowd of protesters in California.

It's about as ridiculous as a black man joining the Klu Klux Klan. Dave Chappelle did a comedy sketch about this, but I never thought it would actually occur in reality.

You'd have to be blind to be a black white supremacist.

But of course, this is not an isolated incident. I recall having lunch with a number of gay men from Georgia. Yes, real redneck gays exist, in plenty. We were talking about President Obama, and one of them said, "that [N-word]?" They all piled on about what a horrible person Obama was and how they didn't like black people.

I was sort of floored by this, as when the Klan gets done with the blacks, and the Asians, and the Hispanics, they certainly will come after the gays. You can't be gay and join the Ku Klux Klan or any white supremacy group. It just doesn't work.  It just doesn't make any sense.

Similarly, you can't be Asian and support white supremacy - unless you are laboring under the delusion that white supremacists will count you as "white" - which they won't.

I guess it illustrates how racial prejudice is pretty illogical. It also illustrates how this identity politics thing makes no sense at all, particularly when people just latch onto identities, willy-nilly.

I mentioned before, how in Latin American countries, your social status is often indicated by the paleness of your skin. Your lawn care guy isn't wearing a mask over his face to avoid covid-19 or to prevent skin cancer, he's trying to keep his skin pale, lest he be viewed as a lower class person in his culture.  This whiteness thing - and prejudice from it - is a worldwide phenomenon.

And I noted before, how I stepped on the cultural land mine when talking with a friend from Costa Rica by saying he had a very distinguished Mayan-looking face. He was adamant that he was with 100% Spanish heritage, with no Indian or negro genes in his body. It turns out that racism is rampant even among minorities.

And yes, many Hispanics consider themselves to be white, and thus not a minority group. But again, from the standards of the hate groups, they would have another think coming. You can't be Hispanic and be a white supremacist.  Sorry, but whites don't count you as part of their club.

Even Spanish people from Spain would be looked upon with suspicion by white supremacists.  And Italians?  Well, maybe on probation.  White supremacy has its roots in Anglo-Saxon Protestantism.  Scots?  Yes.  Irish-Catholics?  No.  Germans?  Yes.  French? Probably not.  And No to all you Slavic peoples as well - yet so many join that cause these days.  That's the problem with these hate groups - you join, thinking they are hating other people, and it turns out, they are hating you.

And no, you can't be Asian to be a white supremacist either, unless you are filled with self-loathing.

And I suspect that is the case here - some form of mental derangement.  In fact, I suspect a lot of these protesters - on the left and right - are suffering from some sort of mental illness, drug use, or a combination of the two.

Why we give them so much airtime and why we take them seriously is beyond me.  Why the National Guard hasn't been called out, after 100+ days of protest, is also beyond me.   These are crazy people - they are never going to stop with their craziness, unless forced to.

And sadly, crap like this ensures that Trump will be re-elected, as once again, Democrats come off as weak and ineffectual.
Newer Post Older Post Home
View mobile version