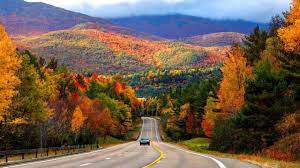 It's that time of year again - and this year will be a good one.


First of all, I hate the term "leaf peepers" as it sounds like more of that baby-talk that permeates our society.   I guess also it was a term my late father liked - and liked to use just a little too often.  But you'll be hearing it a lot in the coming days as this year looks - so far - to be a good one for fall foliage.

We've had a series of cold nights, but not freezing - except last night, when the temperature dropped to 30 degrees just before dawn.  I am no botanist (and neither is Leo Buscaglia) but as I recall, if you have a series of successively colder nights, you get more spectacular fall colors.  The reds have come out first, followed by yellows and now oranges.  It seems you can see the colors actually change through the day - we kayak by one place and it is green, and come back in an hour and some trees are turning red, burgundy or even pink.

I recall living in Central New York that during some years, we would get a "hard freeze" in the early fall, and everything would turn brown and the leaves all fall off at once, turning into a brown mush.  Usually a sign of a shitty winter to come, too.   So the fall foliage thing isn't guaranteed, and when you get a good one, well, be grateful.

But of course, I hate to say that, as it will bring out the "peepers" in droves, and they annoy the locals (even more than I do) with their slow driving - gawking at each new vista of color.  Of course, just about everyone up here makes their living, directly or indirectly, from the tourist business - although none would admit it.  "I just run a gas station!" one cries, not realizing that half his business is tourists and the other half, people who work in the tourism industry.   There is a love-hate relationship with tourists, as evidenced by the bumper sticker you see in Maine - "Welcome to Maine - Now Go Home!"

Pray tell, why do they put "Vacationland" on their license plates?  Mainers - sheesh!

I noted before in an earlier posting that the difference between the New York and Vermont sides of Lake Champlain.  Vermont gets it - New York doesn't.   Vermont is full of quaint towns with little cutesy shops.  Picturesque farms dot the landscape.  On the New York side is "don't look out the side windows" of your car because all you'll see is failed dreams, unpainted oriented strand board, junked cars and marginal businesses.  Oh, and plenty of Trump signs.  We wonder exactly how people living in a dilapidated trailer are making out with Trump - did the "trickle down" tax cuts allow them to buy that new inflatable swimming pool in the front yard?  You know the one that is green with algae.  But I digress.

Anyway, it looks to be a good leaf season. My suggestion is to go to Vermont and stay at a B&B, as camping in a tent in New York in 30 degree weather will get old, fast. Sadly, with CoVid, it is a little harder to get to Vermont than New York - you must be a "resident" of one of the "good" States (i.e., Democratic governor) to be allowed in.
Newer Post Older Post Home
View mobile version