Why There Are No Bargains At Liquidation Sales 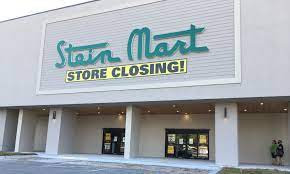 Liquidation Sales are on the rise, but don't think you'll get much of a bargain at one.

A recent article in the local paper chronicles the demise of Stein Mart, which went bankrupt and is now slowly liquidating.   Shoppers complain they aren't finding many bargains at the "Liquidation Sales" even though there are advertised as having up to 50% off.

Welcome to the shill world of liquidation sales.

As I noted in an early posting, in Alexandria, Virginia, there was a rug store that had a "Lost Our Lease!  Going Out of Business!  Everything Must Go!" sign in the window, in foot-high letters, for over a decade.   I guess technically it isn't illegal, as eventually they would lose their lease, or maybe they lost their lease at a previous location or whatever.   The point was, there were no screaming bargains from these rug merchants (who, ironically or not, were Iranian), it was just a come-on to sell rugs.

And what did I say about dealing with people who lie - even making trivial lies?  Another "Featured Snippet!"

But often stores do go out of business and that is happening a lot lately - and will happen more in the coming months.  In those situations, they do need to "liquidate" everything down to the store fixtures.  Liquidators are hired to clear out the inventory and create some cash for the bankruptcy court to distribute to creditors.   Surely these are the real deal - and real bargains, right?

Well, no.  And there are two reasons why.   First, when you go to these sales, often it isn't the store staff running them - they were laid off or fired weeks or months ago.  Rather, it is a hired team of "liquidators" who, like gypsies, go from town to town running these sales for a few weeks before they shut the store down for good.

The sales are structured so that in the first week, little or nothing is discounted from the "retail price" - which means you are often paying more for an item than the store was selling it for, the week before when they were still in business.  Retail prices are just made-up numbers, and a 10% "savings" off a "retail price" means nothing, in terms of actual cost savings.  You have to compare the prices to what other merchants are offering, to see if there is any real "bargain" here.

And it goes without saying that if you buy something because it is "on sale" and not because you need it, there are no "savings" or "bargains" whatsoever.

As each week goes by, they increase the discounts.  This is where it gets tricky.  You go in week one and see something you want to buy, but at 10% off, it is no real deal.  So you wait until week two, when they discount by 20%.   But you run the risk of someone else buying the item before you, and missing out on the "bargain".

From the article above:


Shoppers had better luck at the Lakewood store. Monica Rivas looked over a rack of Tommy Hilfiger long-sleeve button-down shirts on sale for $26.99 each, which was a 10 percent discount. Her 19-year-old son is job hunting and needs some professional-looking clothes, she said.

"That's a pretty good price, but I might wait to see if the price goes down some more," she said before heading to check out women's dresses for herself.

Let's hope the shirts are still there next week when the discounts go up!  In these situations, you end up buying at a price higher than you wanted to pay, to secure the "bargain" before someone else does.  It is a fascinating way of running what in effect, is a slow-motion reverse auction.

The second problem with these "liquidation sales" is obliquely mentioned in the article listed above:

Stormes speculated that Stein Mart already has sold many items since announcing the liquidation sales and closings on Aug. 12.

"But I noticed today that they've put some new things out. So, they must have gotten some sort of shipment in," she said.

Yes, a shipment - of goods not necessarily from the Steinmart company.  You see, these liquidators are more like a pop-up store.  They open up shop in the shattered remains of a bankrupt retail establishment, and proceed to sell things for a month or so until it is all gone.  What they sell is the inventory of the bankrupt company and anything else they think they might be able to unload.  It could be inventory from a previous liquidation sale, where they bought the remnants that didn't sell, or just merchandise they bought from China or whatever.   Why run a store with a declining inventory but steady foot traffic, and have nothing to sell?   Might was well put something on the shelves for the plebes to buy, right?

It makes sense from the liquidator's point of view and that of the bankruptcy court.  The liquidator can operate at a lower cost, as they make side profits from selling their own merchandise, and thus incur less of a cost to the bankrupt company.  Computerized cash registers can keep track of what merchandise is sold from the store inventory or theirs - or perhaps they just paid a flat fee to the bankrupt company to liquidate.

Bear in mind, due to the "pop up" nature of the stores, you cannot return the merchandise for a refund, if it is defective, doesn't fit, or whatever.  As such, you are receiving something that is worth less than what was sold by the store, prior to bankruptcy.   A no-return policy is worth far more than some 10% discount, in my opinion.   There are no bargains to be had.

They count on people thinking there are great bargains, which is why they tout "50% off!" and whatnot, and they count on the compulsive shoppers and "bargain hunters" to buy up a lot of stuff they don't want or need.  I have a friend who does this -buying things they don't want or need, only because the price was a "bargain".   I end up with a lot of this stuff, the rest clutters their home.  Shopping as a "hobby" is a one-way ticket to hoarderville, in my opinion.

Expect to see a lot of these "liquidation sales" in the coming months, but don't feel like you are missing out on anything by not going to one.  Chances are, the prices are "meh" the merchandise isn't even from the company being liquidated, and the no-return policy sort of seals the deal.

Maybe at the very end of a sale, you might find something they want to unload.  Store fixtures, which are obscenely priced when new, often go fairly cheaply.  And of course, any chipped or dented stuff might be sold cheap - but then again, might be broken.   And of course, it is only a bargain if it happens to be something you intended on buying beforehand.