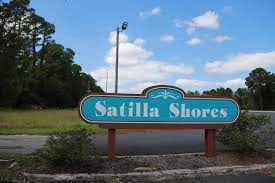 Quite frankly, I was surprised by the verdicts yesterday.  Pleasantly surprised.

The verdicts came in and it was a little surprising to many folks that all three people were convicted.  But then again, stereotypes about Georgia are somewhat outdated.  Not only is the metro Atlanta area very blue, but the coast of Georgia (all 100 miles of it) is home to many Yankee transplants.  My Trump-supporting neighbor who was on the jury was an alternate - so their vote didn't count.  But even then, I suspect they would have voted to convict on at least some charges.  The process was exhausting, they said.  Imagine having to watch a video of someone being killed, over and over again.  Why the defense thought "leaking" the video to the media would help their case is beyond me.

But of course, it isn't over just yet. There will be motions for a new trial, appeals, and so forth.  And in February of 2022, there is a Federal trial on hate crime charges.  So stay tuned for that.

The police cars stationed at the entrance to the Satilla Shores housing development, off route 17, will no doubt disappear.  The television news trucks that were parked on the lawn by the courthouse will go away, along with the stage they set up, and the multiple Jersey barriers. The expected rioting and protesting never occured, and everyone went home for Thanksgiving.

Well, not everyone.  Mr. Aubery is still dead and his family will no doubt miss him at the Thanksgiving table.  Finding someone guilty doesn't make everything go back to the way it was before.  But maybe - just maybe - this case and trial can be a lesson for everyone involved. Running around with guns, trying to enforce the law to protect property is a futile and dangerous endeavor.  Maybe the Rittenhouse kid got away with it, but his life will no doubt be marked by that one event.  We just have to hope that protesters and counter-protesters don't take that case as carte blanche to bring guns to a protest rally.

Time was, you couldn't do that.  In fact, they even outlawed signs-on-a-stick, as the signs were detached from the sticks and the sticks used as weapons.  For some reason, today's timid Police don't see the need to disarm people at protest rallies.  The 2nd Amendment is not an absolute right - none of the rights in the Bill of Rights are absolute - even the right to "free speech".

So no, it isn't over.  White supremacists are still among us.  Hundreds of people are still waiting in Dealey plaza for the reincarnation of JFK and JFK Jr. who will for some reason endorse and run with, Donald Trump.  Like that could happen.  Reincarnation, I could believe.  Endorsing Trump?  Not bloody likely.

The sad fact remains that a small but vocal percentage of  people in the USA are literally insane, and believe in things like Qanon or "Stop the Steal" or whatever.  These are people who are delusional.  Granted there are delusional people on the Left as well - they want to hand out money to people, as opposed to executing them, though.  I am less worried about the Left than the Right.  One wants to shower me with money, the other with bullets.  This will not end well, if left unchecked.

Maybe the "Crazy Years" will wind down with the pandemic.  And make no mistake, it is a worldwide phenomenon.  People all over the world are losing their minds and voting for dictators.  It isn't just the United States, it isn't just Trump.  People want to blame Biden for high gas prices and inflation - but who is causing high gas prices worldwide?  Inflation worldwide?  That Biden is a busy guy!

But again, it gets down to delusional thinking.  People seem to think there is a knob on the wall of the Oval Office that sets gasoline prices.  Trump turned the knob down, while Biden for some reason, keeps turning it up.  Maybe he thought it was the thermostat.

Left or Right, it doesn't matter.  People are idiots and blame whatever is going on in their lives on things like Presidents or Congressmen.  No one wants to look inwardly and ask whether their own life choices come into play.  So many people I know use pickup trucks as personal transportation.  Not to carry loads, tow a trailer, or even haul five or six friends around - they drive to work solo, in a 4,000-lb gas hog, and then complain about fuel prices.

We have a pickup truck.  It is stored in a storage locker out by Satilla Shores.  Why?  Well for starters, it won't fit in the garage (or will, just barely).  Second, we only use it to tow our travel trailer.  It is not a fun vehicle for running errands or getting groceries.  It is too big, too hard to see out of, and gets pretty mediocre gas mileage, even without the trailer attached.  If we give up RVing, the truck will be sold the same day.

But that's thinking logically.  Thinking emotionally is deciding you "have to have" this huge vehicle as a personal car, because you think it will make you look rough-and-tough.  And of course, jacking it up and putting Bozo tires on it is part and parcel of the deal.

I digress, but it goes to the point about delusional thinking.  These guys from Satilla Shores weren't "on edge" over a "series of break-ins" in the neighborhood, because there weren't any.  The only thing stolen from that neighborhood was a gun that one of the defendants left in his truck, in plain view, on the front seat, overnight, unlocked, parked on the street.  Again, delusional thinking - and a poor example of proper gun safety!  It is not surprising, in retrospect that people like that, engaging in lazy thinking, would assume that chasing people down was the "answer" to a question no one was asking.

It will be interesting to see what happens to Satilla Shores the housing development.  I think if I was on the HOA board, I would propose renaming the place at the very least.   It will be hard to sell a house there, I think, with the reputation it has acquired.