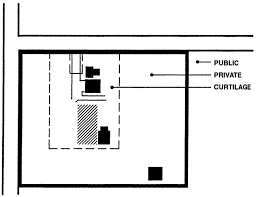 Following a court case on television isn't helping you personally - but it can make you miserable.

I have not been following the two "Tot Mom" trials going on right now, even though one is in my hometown.  I can't alter the verdict in either case by watching television, even assuming I got cable TV, which I'm not going to do.  The only useful piece of information I can glean from the local trial is to not be downtown near the courthouse when the verdict comes in.  People will be upset, no matter what it is.

I feel bad for the family of this Aubrey fellow, as they experienced a real loss.  And I don't understand the mentality behind chasing down someone running through your neighborhood.  Well, actually I do. I've had things ripped-off in the past, and when it happens, you do feel violated.  You start to suspect people who are wandering around your building and it can make you paranoid and not a nice person to be around.  It isn't easy, but you have to let go and realize you are not the police, and no, the meter-reader isn't the kleptomaniac who stole your Amazon package.

That being said, racism is a thing in America, and as I have pointed out before, in the world.  We don't own the Patent, Copyright, or Trademark to racism.  It is a worldwide thing.  And it is not limited to white people, either.  In Latin American countries, your status is often tied to your skin color, with the lighter shades rising to the top of the pyramid.

And black folks don't get a free ride, either. If I went jogging through a predominately black neighborhood, such as "the homes" in downtown Brunswick, I would expect to be hassled at the very least - which is why I don't go jogging there.  Well, that and my knees.  But when I was younger and in college, I was chased and attacked by black youths on two occasions.  Once while taking an ill-advised shortcut through a park, and once while delivering pizzas.  Same shit, different day - people don't want one of "them" in their neighborhood.  I am not saying this is right or engaging in whataboutism, just pointing out the reality of life on Planet Earth.  And yea, that sucks, too.

But getting back to self-defense, in an earlier posting, I noted that while it might be a way of avoiding jail time but hardly a way of being exonerated.  You still have to live with the idea you killed someone, and if the fact situation is murky or the case becomes television-famous, you can expect the rest of your life will be marked by this one event.  If you can avoid getting into such situations to begin with, so much the better for you.

Self-defense is a defense to the legal charge of murder or manslaughter or assault.  It doesn't mean you didn't do those things, only that you are claiming you were justified in doing it.  And as we shall see, there are various levels of self-defense:

1.  The Castle Doctrine:  "A man's home is his castle" they say, and perhaps that is where the name of this doctrine came from.  Simply stated, if someone breaks into your home, you are pretty much justified in shooting them dead, and few questions will be asked in most cases.  This has lead to the old joke that if you want to shoot a burglar, make sure you drag them in through a window first.   That's a joke - not legal advice.

Why does the Castle Doctrine exist?  Well, simply stated, it isn't hard to figure out that the guy breaking in is a "bad guy" and the fellow residing in the home is the "good guy."   This is not to say it always works.  There have been cases - mostly in California - where burglars have sued homeowners when they tripped on the stairway.  Homeowners need to provide a safe working environment for burglars!  But that sort of shit is an outlier, not the norm.

And this is not to say the Castle Doctrine always applies.  If you shoot someone in defense of property and not human life, well, you may still be on the hook for it.  For example, you see some "rotten kids" stealing the battery out of your pickup truck parked in the driveway. You pull out your trusty .357 Magnum and blow their brains all over the sidewalk.  That's not really a defense of person, but of property.  That situation happened a few years ago in Texas, as I recall, and I think the guy was acquitted.  Texas cases and California cases are best not cited outside of their own jurisdictions.

But speaking of that, can you shoot someone who is not in your house but on your front porch?  Again, it depends on jurisdiction, but there is the old common-law concept of curtilage - an area around your home that is, well, your home.  This concept was illustrated in the television series Longmire, where a survivalist nutjob set out stakes and police tape outside his home to demarcate the "curtilage" and then fired shots at anyone who came inside that limit.  This is also probably a bad idea.

2.  Fear of Imminent Death or Great Bodily Harm:  That is the standard for self-defense outside of the home (and in California, perhaps inside the home as well).  If you ever shoot someone, and the Police show up, say, "I was in fear of imminent death or great bodily harm" and "I want to speak to a lawyer" and then shut up.   Note that the fear must be real (to you) and imminent.  But it need not be actual.  Someone points a realistic toy pistol at you (or an unloaded weapon) and says, "I am going to kill you!" as a joke, and you take it seriously and kill them, it is still self-defense if you believed you were in fear of death of great bodily harm.

But you have to prove that belief in a court of law.  As you can see, outside the home, self-defense gets a whole lot trickier - as it should be.

In other situations, it gets even murkier.  Two guys get into a drunken brawl outside of a bar. Half the patrons come out to see the fight, and one of the fighters pulls out a gun and shoots the other. The Police show up and most of the witnesses claim not to have seen anything.  Two people who never left the bar and saw nothing, give conflicting stories as to what they "saw."  The survivor claims he was in fear of imminent death and great bodily harm, as he saw his opponent pull out what he thought was a gun, but was actually his cell phone.

Guilty or Innocent? Well, technically, guilty or not-guilty - our courts don't find people "innocent" just "not guilty" which again is one reason you will have a stigma associated with you even if acquitted.

So what's the answer?  There isn't one - a jury hears all the facts, or at least the evidence presented (including the made-up testimony of the bar-stool-warmers who saw nothing) and then has to make a decision whether to convict or not. It is not a foolproof system, as it is run by fallible human beings, and all the facts are not necessarily always known.

The point is, it is a lot harder to assert "self-defense" outside of the home, and it should be.  Because when you get down to it, if two people are shooting at each other, each may believe they are justified in using "self defense" against the other.  The survivor is the only one left to tell his side of the tale - in most cases. Self-defense is not an absolute defense - you have to prove it, to a jury.

So what does this mean with regard to the two "Tot Mom" trials going on right now? Beats me, I haven't been following them that closely. I was concerned I might get chosen for jury duty (as a neighbor of mine was) and I was out of town. I realized my voter registration had my old Post Office Box number on it, and I corrected that right away.  Of the 1,000 people (!!!) called for jury duty, half failed to show up - which may be more of a voter registration problem than anything.  People move away and few bother to cancel their registrations.  As far as I know, I am still registered to vote in New York, Florida, Connecticut, and Michigan - as well as Georgia.   Probably have been served with jury duty notices in more than once - returned to sender, no forwarding address.

So, since I am not on the jury, I don't need to really follow these things that closely. The jury will decide, and they may decide well or make a lousy choice. Or there may not be sufficient evidence to convict beyond a reasonable doubt.  It is hard to say - but in any event, my getting riled up about it doesn't solve anything.  It only raises my blood pressure.

I am not going to "solve" these cases by doing a frame-by-frame analysis of the videos, anymore than I am going to "solve" the Kennedy assassination or discover aliens in area 51. Spending time on these endeavors is not only fruitless, it can drag you down emotionally.  In Ithaca, New York, people sport bumper stickers that say, "If you're not outraged, you're not paying attention!"  And I suggest to you that the powers-that-be want you to be outraged so you watch 40 hours of CourtTV and sit through all those SUV ads.  So long as you are a passive observer of your own life, but have valuable "opinions" about everything that mean nothing, they can get you.  Hell, after the OJ fiasco, sales of white Ford Broncos skyrocketed.  People are that stupid - and those Broncos were really uncomfortable 2-door gas hogs that had very limited off-road capabilities.

Move on with life. There will be injustices, to be sure. But railing against them or burning down a McDonald's isn't going to solve them, anymore than chasing after a jogger with a shotgun is going to solve petty crime.  Try balancing your checkbook and putting $5 more in your 401(k) - you'll not only be doing yourself a favor, but doing the rest of the world a favor.  We have enough outraged causistas already, thank you.  All full up, here!

Be kind to yourself - turn off the TeeVee!