The Problem With Self-Defense 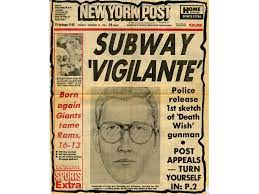 If you shoot a burglar in your home, it is clearly self-defense in most jurisdictions.  Outside the home, it gets trickier. But even if you are acquitted by self-defense, it doesn't mean your life will go back to normal, particularly for a notorious trial.

When I was younger, New York City was a crime-ridden ghetto.  It is hard to convey this to the new generation, raised on a Times Square which is family-friendly and clean subway cars.  But back then, graffitti was everywhere.  Stop at a traffic light and kids would climb all over your car, "washing" the windows, until you gave them money to go away.  Getting mugged was a real thing.  Getting your car broken into or stolen was, too.  I recounted before, driving under the UN building, seeing a late-model Ford Country Squire wagon, on its roof, in the median, with the tires missing.  I guess rolling it over was easier than jacking it up.

Crime on the subway was rampant.  Muggers - often just teenage kids - would beat the crap out of you and take your wallet.  You never made eye contact with anyone, lest they start to harrass you.  Against this background, a young man named Bernhard Goetz made headlines when he shot some young muggers who were trying to intimidate him with sharpened screwdrivers (used to jam open vending and pinball machines).  He was dubbed the "Subway Vigilante" and the case made the news for months - and galvanized the nation.

Many sided with Goetz - being tired of being robbed, burgled, harassed, raped, or whatever.  Young punks got what they deserved!  One was paralyzed for life.  The case had murky facts.  Was Goetz really "in fear of imminent death or great bodily harm"?  Did he have a duty to retreat?  Did he shoot one of the victims after they were shot the first time, saying, "You don't look so bad, here's another!"

Goetz was aquitted of the serious murder charges, but convicted for carrying an unlicensed, concealed weapon, and sentenced to six months.  So the system worked, right?  He claimed self-defense, much as the Aubrey defendants and Rittenhouse are claiming.  And he got off and his life went back to normal, right?

Well, once the cameras were put away and the bright lights turned off, Goetz faded to obscurity.  He gave some media interviews later on, and ran for mayor of New York (everyone does that, at one time in their lives, it seems), but his life really never got back on track - not that it was going anywhere in a hurry before the shooting.

according to Newsweek, [Goetz] now spends his time as a vegetarian activist, nursing injured squirrels around New York

Sounds like it all worked out for him, didn't it?

George Zimmerman is another famous "self-defense" gunman who was acquitted in the killing of Trevon Marin.  Zimmerman, however, did not fade to obscurity, but has had several run-ins with the law.  And again, while the network cameras were rolling and the bright lights were lit, everyone wanted to hear what he had to say and each side of the gun control debate used him as a stalking horse for their political arguments.

Once the trial was over, they dropped him like a hot potato.  It didn't help any that he had some legal troubles down the road.  It was sort of like OJ - sure, he was acquitted.  Where is he today?  Out on parole after serving nine years in jail.  Life doesn't return to "normal" after a "not guilty" verdict.

Many are saying this Rittenhouse kid will be acquitted, and given the evidence, it is likely true.  But once the lights and cameras are gone, I wonder whether he will remain the darling of the NRA and the far-right, or whether they move on to the next flavor-of-the-month. Unless he has a compelling TV personality, he might get thrown under the bus.  And going from intense attention to nothing can do weird things to your brain.

You can just tell from his physique that by age 30, he'll be a 300-pounder.  I wonder what he will be like then - some sad man whose life went off the rails?  Or what?  Whatever the case is, I doubt his life will go back to "normal" anytime soon - if ever.

That's the problem with self-defense.  It might keep you out of jail, but you still killed someone - even if it was justifiable, you have to live with that.  And in cases like these, where people are emotionally charged, you can expect a lot of blowback from folks, long after the trial is over.

Even a decade from now, when he interviews for a job at the tire store, the manager will say, "Rittenhouse? say, that name sounds familiar!  No relation to....?"

So, sometimes it might be a better idea not to show up at a riot carrying a gun, whether you are an Antifart setting fire to a McDonalds, or a teenager looking for a weekend thrill.  Your life will never be the same, if you get involved in a shooting like that - even if you are acquitted.