Fake Meat - Why It Won't Work 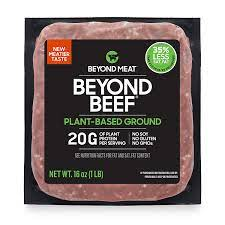 On I-95 in Florida, in cattle country, is an idiotic billboard for a meat company.  It shows a juicy steak and the caption reads, "What vegetarians eat when they cheat!"   Haw-Haw!   Of course, they have had to replace the billboard a few times now, as red fades quickly in the Florida sun, and the juicy steak looks like a grey blob.  .Who wants to eat that?

It is akin to these disgusting billboards, showing a person - usually a child - with a gross juicy hamburger in their mouth, usually with slobber all over their faces.  I am not sure what they are advertising, but whatever it is, I lost my appetite.  And like the meat billboard, the Florida sun doesn't make it more attractive, over time.

I guess we over-eat in this country to the point where not having an appetite isn't an issue.  You can be grossed out and still wolf down 3,000 calories at one meal - and then star in your own reality show about being grossly overweight!

Ugh!  I can testify from personal experience that being overweight is no picnic, and if you are not in pain now, you will be as you get older and realize you are carting around the equivalent of a 60-lb bag of cement every day.  The knees go first, followed by the back.

Recently, two companies have tried to make a big splash - mostly on Wall Street - by selling fake meat. One is called "Impossible Meat" and the the other "Beyond Meat".   Recently, Beyond Meat reported less-than-expected sales during their busiest time of year - backyard BBQ season.  I wonder why that is?

Well, for starters, the name.  "Meat" is not an appetizing name for meat, which is why we have a lot of euphemisms for meat products to avoid thinking too hard about what we are ingesting.  Sirloin, T-bone, Porterhouse, Steamship Round,  Hamburger - and so on and so forth - all names that really don't evoke body parts of animals.

I know I am weird, but I have a problem eating something with the name of a body part that I also have.  So no liver-and-onions, kidney pie, calf's brains, or sheep stomach.   It is not that I don't eat these things - if you called them "sausage" I'd wolf them down.  But when you call them names of body parts, I kind of get grossed out.

It reminds me of the annoying restaurant trend of a few years ago, where a restaurant would offer a pasta or rice dish and then ask, "what protein do you want?" as they offered beef, chicken, fish, or tofu or some such.  Protein?  We're making a meal here, not a chemistry experiment.  Thanks, but I've lost my appetite.  But again, it didn't faze others, who apparently can eat even when they are not hungry.

Calling something "Beyond Meat" or "Impossible Meat" doesn't help matters any. You have this M-word that is unappetizing.  Not only that, but some of the products are weird.  One of the things I've seen in the store is fake meat, sold like it was ground beef.  It just looks disgusting, all red and raw, looking like.... raw meat.   I mean, if you are going after the vegan market, it is a poor choice.  It would be like selling a vegetable medley disguised as a severed calf's head.  The vegans ain't going for that.

We are not vegetarian or vegan, but we realize that as you get older, your body has a harder time digesting red meat - and digesting just about anything, it seems.  Yes, some vegetables are also hard to deal with, and if it wasn't for bacteria in your lower intestine fermenting this shit (quite literally) it would not be digestible at all. That's why vegans fart so much.

I am not sure most vegetarians or vegans want to go through this fake ritual of "cooking" red fake-meat and then eating it, "Just like normal people eat beef!"   The ones I know, anyway, aren't interested in faking meat-eating, they want to eat vegetables.   The target market, I think, would be meat-eaters who are avoiding meat for health reasons, not vegans who crave a cheeseburger.

It is akin to how many straight people think gays want to be treated - just like them!  But frankly, being outside of society, looking in, is so much nicer than swimming in the mainstream, immersed in culture to the point where you don't realize how you are being manipulated.  Please don't take this as an insult, but I don't want to be just like you and that is one reason I wasn't a big fan of this gay-marriage thing.  It is, to quote Dave Chappelle, the fake-meat of marriage.

You can't be different and just like everyone else at the same time.

Perhaps I am not explaining this properly, but fake meat misses the point of vegetarianism or veganism.  If you put out fake meat at your next soiree for your vegan/vegetarian friends, don't be surprised if they don't wolf it down.

It reminds me of attempts to make a "Tofurkey" for Thanksgiving.  Some well-meaning person takes a mound of tofu and molds it into a turkey shape for Thanksgiving.  The net result is ten pounds of under-cooked tofu in a big hot mess on a platter.   Stop trying to make vegetables into meat.

I like tofu - fried with spices and served with rice, or smoked until it is like a cheese. I am not interested in making it into a tofu burger or something along those lines.

We've tried some vegetarian and vegan items that mimic meat-based foods, with mixed results.  Morningstar Farms (Kellogs) makes a "Chik Patty" and nuggets that are very much like the real thing - but they have to be cooked just right to get the texture.  They also make a vegetarian corn dog (I kid you not) which I doubt anyone could tell from what they sell at the State Fair.  Their sausage patties are also a pretty close deal - again, if cooked properly.  Cook them too long and they get tough.  Their fake bacon should be left on the shelf, however - and illustrates how trying to make fake meat is a mixed bag.

But unlike "Beyond Meat" the "cooking" of the Morningstar products amounts more to merely heating them to serving temperature (or slightly above).  For some reason, the "Beyond Meat" stuff has to be cooked first, before eating, and has an expiration date with a short shelf-life.  It's like all the pain of real meat, without any of the benefit.  The Morningstar stuff is sold frozen and will keep in the freezer a long time.

We started using the sausage patties only because frying raw sausage in the camper was a cleanup nightmare.   They are more expensive than the regular kind of sausage, and since those early days, most stores now sell pre-cooked sausage, which makes sense if you know anything about trichinosis.  It also is just more convenient, less of a mess, and less of a food safety issue.  So the meat people have upped their game these days.  Who buys raw bacon anymore, when the pre-cooked kind is so much easier to make, less messy, and safer to use?  Ever tried to get the raw bacon grease off your hands after pulling it out of the package?  It's enough to make you go vegan.

I am not sure what the answer is, but "Chemical Veganism" isn't it.  Making products that are faked-up to look and taste like meat products is always going to fail, because no matter how much you fake it up, it will always fall short of the real deal.

Maybe a better answer is to just enjoy vegetables for what they are, and not make them into something they are not.  Embrace the tofu, and stop trying to make it into a fake something else!