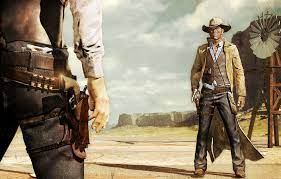 "An armed society is a polite society" - or is it?

In Heinlein's many Sci-Fi books he advances a lot of ideas that Libertarians seem to like - including a deep distrust of authority figures and a perverse desire to kill the police. Time was, we called that mental illness.

The characters in his books are always well-armed with various knives, swords, guns, blasters, rifles, and other nasty little things designed exclusively to kill human beings. His novels are rather bloodthirsty, as the "bad guys" usually get mowed down, one way or another.  In some of his lesser and later works, he depicts a future world where "Proctors" (the Police) are the enforcement arm of a strong despised government. In more than one scene, he depicts a stand-off with the Police, ending in a fire-fight where many of the cops are murdered and the "compound" the heroes live in is set alight or blown up - while they escape through secret tunnels.  It sounds an awful lot like the paranoid survivalists we have today.  I think Heinlein was losing his mind toward the end, there.

One of Heinlein's mantras was "An armed society is a polite society" and the characters, particularly Lazarus Long, say they "feel naked" without some sort of sidearm.  The theory is - and it is a theory only - that if everyone has a gun, prominently displayed on their belt, then no one would be impolite. No one would steal your stuff, because if they did, well, you'd shoot them.  So that puts an end to theft!  And if someone brushes up against you in a bar, you'd tip your hat and say "pardon me!" so they didn't gun you down.  Women would not have to worry about being raped, as they could dispatch the rapist with a quick shot of their trusty sidearm.

But of course, reality is something different, and it seems that today we are trying out a grand experiment of Heinlein's theory and finding it has a few holes in it.  Like the days of the wild West, when everyone was armed, there were instances where people would get into disputes, usually fueled by alcohol, and gun each other down.  Places like Dodge City with its Boot Hill became famous for gun fights in the streets.  Ranchers and farmers would shoot it out in the range wars, as they fought over who got to use the land.  It wasn't pretty, to be sure.

That's the problem with Heinlein's theory - people are irrational.  You brush into someone in the bar and say "excuse me" and it devolves into the Cantina Scene from Star Wars - you have to hope Obi-Wan is there with his light saber to bail your ass out.  Not everyone is rational and polite, and some folks go looking for trouble.

And speaking of Obi-Wan, the person who has the fastest draw, the most powerful weapon, or who is associated with the most powerful gang, ends up winning these fights.  You back into someone's car at Walmart and a gang of armed thugs pours out of the car you hit.  How is your being armed going to make this work out?  The resulting carnage would be horrific and in fact, it already is, as people in this country are increasingly settling petty disputes with firearms.  Don't like the loud music some kids are playing? Shoot them dead.  It's been done - and it ruins the lives of the shooter as well as kills the victim.

There has been a lot of ink spilled about police shootings of suspects in this country.  Our European neighbors don't understand it - why would you pull out your service weapon during a traffic stop?  Why would a traffic cop even be armed? In American cop shows, the "perp" is often shot by the cops, sometimes in the back as he flees, at least in the old shows from the 1960's.  In British crime dramas, the cops tap the suspect on the shoulder and say, "Come on now, it's down to the nick with you!" and the criminals sighs and says, "You got me, copper, I did it!" and off to British Luxury Jail for him - for at least three months!

One reason cops in America are so quick to draw weapons is that so many people are armed these days and so many of them seem eager to use their guns, against their enemies, their friends, their family members, and yes, the police. I recounted before how our (former) massage therapist was arming himself with an arsenal of weapons on the premise that, if stopped by the Police he would fire first. And you wonder why the cops are so quick to shoot!  I tried to explain to him that killing a cop is not a good way to get out of a speeding ticket, but he would have none of it.  It is like a mental illness taking hold in America.

Now get this straight - I am not anti-gun.  But there are a host of people who shouldn't have weapons of any sort and a whole host who should not be allowed to buy firearms.  Mentally ill people, convicted felons, illegal immigrants, and so on and so forth.  Yet, every time we try to improve our background check system (which the NRA has successfully lobbied to keep as paper files and not computer records) the gun nuts push back.  They fear some sort of national "list" of gun owners, that will be used in this paranoid Heinlein fantasy when Hillary Clinton knocks on your door and "comes for your guns!"

Like I said - mental illness.  I am not talking about responsible gun owners.  I am talking about people who have thousands or tens of thousands of rounds of ammunition as well as a host of firearms bought willy-nilly.  These are the guys who put their guns on the bed (hello Freud?) and post a photo of them on Facebook or whatever.  These are people who are obsessed with guns and obsessed with politics. These are people who are not nice to be around - and if they are not mentally ill when they start out, they quickly work their way down that path.

These are the folks that Heinlein failed to take into account with his "armed society is a polite society" gambit, because these are not polite people. Well, actually, they resemble the protagonists in many of Heinlein's later novels.

There are, of course, other problems with the theory.  When you have such a plethora of guns - as we do today - you end up with weapons being lost or stolen.  One of the perpetrators in the Aubrey trial was upset that someone stole a pistol that he left on the seat of his pickup truck, unlocked, parked in the street, overnight. This is not a responsible gun owner - and the guy was a former cop!  Some teenager or kid could have swiped it and taken it out in a field to "try it out" and blown their brains out.  People who aren't used to the kick-back from a pistol can really hurt or kill themselves.

The other problem is, well, domestic violence.  The bulk of gun-related violence in this country is the result of family squabbles gone bad. People get upset with each other and one of them grabs a gun and suddenly everyone's life is turned upside down - and one or more are ended.  It happens every day with regularity.  Again, proper training is a key, but also proper mindset and temperament.  It was one reason why in the old days, it was hard to get a concealed-carry permit.  You had to show a need for it, as well as the maturity required.

A friend of mine in New York had to jump through hoops to get a concealed-carry permit,back in the day.  He needed one, as he carried large sums of money for work, as well as negotiable bonds and precious metals.  He needed affidavits from the Sheriff and Chief of Police as well as references from several upstanding members of the community.  They weren't going to hand out permits to drug users, drunks, or ne'er-do-wells.  He got his permit, too.  I never saw his gun, either, which is the way it should be.  Guns are not for displaying, playing with, or looking at.  You draw, aim, shoot, or put the damn thing away.  It isn't a toy.

A new generation of gun owners think differently - guns are toys to them,and rather than go to a shooting range and shoot at boring old paper targets, they go to modern "ranges" where they blow holes in old cars and appliances, or shoot through a water melon, pretending it is someone's head that is exploding.  Some fun!  And of course there is tannerite - you put that in something, shoot at it and watch it blow up!  Yee-Haw!  It is like a child at a 6-year-old's birthday party.  There is very little discipline in these things.

Heinlein's theory would work, provided that people were mature and rational.  It is like the "Invisible Hand" theory of the marketplace.  It would work, if people were rational.  And some are, but most aren't.  They invest in tulip bulbs, the South Sea Company, or today, Gamestop or "Non-Fungible Tokens" (the latest gag to trip up the plebes).  This is the infantile mentality that screws up financial markets and allows a very few at the top to make even more money.  They don't take it from you, they get you to willingly give it to them!

Thus, "free market economy" fails for the same reason "Polite Society" fails - there are too many stupid people out there who just don't behave rationally.  We've tried to educate people - hence our public school system.  The idea being, once people learned history and such, they would realize that easy answers to complex problems were usually the wrong answers - and the bait used by con-men to accumulate wealth and power.  Sadly, it seems we have gutted our educational system - half the country wants to turn it into Vo-tech schools, the other half wants to turn it into an indoctrination system to far-out thinking.

In the name of "freedom" and a free economy, we have stripped ourselves of regulations - regulations that were designed to prevent economic collapse, as well as keep firearms out of the hands of incompetent and irrational people.