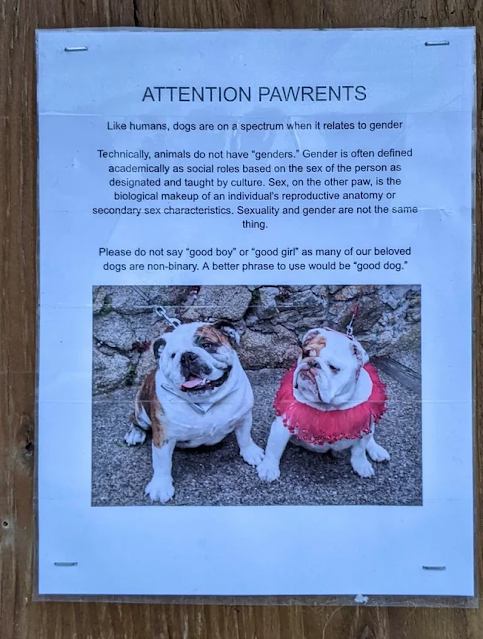 Political extremists are trolling us by taking obscure or often made-up events and then positing they are representative of the other side's views.

I saw the above poster online and what disturbed me was that folks thought it was real - when it was an obvious troll.  I mean, who cares what you call a dog?  It's not like they understand.  Moreover, who prints out such posters and then staples them up all over town?

Well, maybe Alan Wagner.  He's one of those performance artist types. He puts up bizarre and funny posters all over LA just to get a reaction. Supposedly his ex-girlfriend accused him of date-rape, sort of, after they broke up.  And someone doxxed him and sent him death threats and put up posters of their own, accusing him of raping numerous women.  After reading about him, I couldn't tell if this was also some sort of performance art piece - pointing out how quickly the torch-and-pitchfork parade can get started in this great land of ours.  Or maybe just a means of getting famous - that's how its done these days, you get accused of doing something awful.

We are being baited.  We are being trolled.  And like clockwork, people chimed in on how ridiculous this was and how we are being smothered by political correctness and cancel-culture.  Not a single person bothered to ask if it was really real, where it came from, who put it up, or whether the whole thing was just an elaborate prank or joke.

That's the problem with the internet.  So much of it is fake, fake, fake.  We see videos of confrontations or funny things and no one bothers to ask,"Why was someone filming this?  I mean, it starts out with someone folding laundry and then escalates into a fistfight.  Why would someone film someone sorting laundry?"   Similarly, so many "prank" videos are staged and scripted.  Maybe some of them are still funny, but they aren't real.

But real is so 20-minutes-ago.  We live in a new virtual age of "Meta" so you'd better strap on your Oculus Rift and plunge into this new world of fantasy, where - just like your Psych 101 professor predicted, reality is what you perceive it to be, or in the case of the internet, what you want to make it to be.

This worries me a bit.  I hope to hang around this planet another 20-30 years, God willing, and it would be nice if it didn't devolve into World War III or Civil War Part 2 - the war over nothing.   It would be nice.  Then again, I do have enough money to emigrate to Canada.  Canadians, it seems are not immune to American wackiness - they seem to have caught at least a whiff of it as well.  In fact, the madness has spread worldwide, because that's how far the Internet spreads.

So how do we fight this new form of mental illness?  Well, with a good dose of common-sense.  No, not all Republicans are heartless bastards who want to take food from the mouths of the poor and worship Donald Trump as their God.  Not all Democrats are gender-fluid PC-cancel culture Social Justice Warriors who want to teach your third grader that he should be ashamed for being white.

Sure, maybe these outliers exist somewhere - in a mental institution or a homeless shelter, or a proud boys meeting or some ivory tower liberal arts college.  But they don't represent the mainstream of America.  And the antidote for Communism isn't Fascism or vice-versa. Throwing away our perfectly decent government and country over some perceived and made-up slights would be the dumbest thing ever done in the history of mankind.

But the history of mankind is a history of one dumb thing after another.  People crave power and control and will destroy a country just so they can run it for a few years and pocket the profits.  We saw this with the downfall of Rome, and with the rise of Nazism in Germany.  Around the world, the Kleptocracy is the norm, not the exception.  Maybe some people in Afghanistan craved Democratic reforms, but the majority just wished it was they, not someone else, pocketing all that bribe and graft money.

Human nature is an ugly thing and always has been.   But what is really sad is that so many people are riled up over nothing or to be more precise, made-up stuff.  What's worse is that they are willing to sacrifice their own well-being and even their lives for nothing.

We need to stop believing in convenient things - on a personal level as well as a national one.  It is all-too-easy to demonize the opposition, but it accomplishes little.  Much of what goes on today as "Political Thought" comes down to schoolyard name-calling.

Late-night comedians, for example, thought that it was wildly funny and a searing indictment of Trump that his family name in Europe was "Drumpft" or something along those lines. Was that funny?  Did it mean anything?  Similarly, I see people laughing at Joe Biden for being three years older than Trump.  He slipped on the stairs!  He can't hold an ice cream cone (I don't get that one - did I miss a nationally important event by not subscribing to Cable TV?)

But maybe our biggest weapon is skepticism. No, not the skepticism of vaccines or masks and science in general.  But skepticism of things that sound awfully convenient and also go against the grain and against common sense.

All that being said, maybe it is already too late, and I should be applying to residency up North, before it all goes to shit down here....