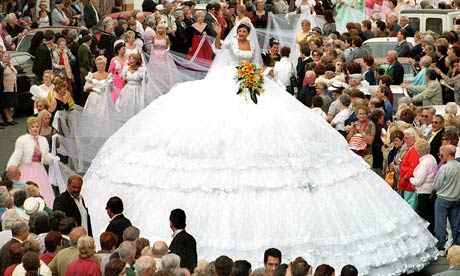 The far-right likes to make fun of Ithaca, New York as a bastion of political correctness and left-wing thinking.  And to some extent, they are right.  Folks in Ithaca are well-meaning, but they tend to go to extremes when it comes to political thought.  And as I noted before, sometimes it results in ridiculous outcomes.

For example, I recalled how the local paper published an editorial arguing that wind farms were actually worse for the environment than coal as once the wind stopped blowing twice as much coal would have to be burned.  This was, of course, a nonsensical argument, and it would have helped if the editor had snipped the coal lobbying group logo from the accompanying graphs and illustrations before publishing his article.

One of the more humorous examples of the politically correct thought in Ithaca occurred when we received an invitation to a wedding reception for some friends of ours we knew from Washington.  I don't have a copy of the invitation anymore, so I will try to remember what it said from memory:

Come join us for a celebration of the life and love of Mary and Richard at Lakeside Park in Ithaca, New York!

Our reception will be a potluck supper.  You should bring at least an entree and your own beverages.   Bring your own libation, however please serve it in opaque containers as Steve is going through rehab and doesn't need to be tempted with alcohol.

The reception will, however, be 420-friendly.

Also please note that Nancy is Vegan, so any entree you bring should be vegan compatible.  Consult Nancy if in doubt.

And please, no glutens!  We want this to be a gluten-free reception.

In addition, we want to have an environmentally-friendly, zero-carbon footprint, recyclable wedding reception.  So we ask that you do not bring disposable dinnerware, paper plates, napkins, or any other items they will add to our landfill crisis.  Reusable and washable plates, glasses, pots, and pans are a must, or if necessary they should at least be recyclable.  The Park is carry-in, carry-out, so please bring your own recycling containers!

Dress is casual, however we request that you wear only natural fibers.  Please, no spandex, that is made by the Koch brothers!

Henry has a list of foods that are currently subject to boycott.  Please do not embarrass the other guests by bringing anything on the boycott list.  Consult Henry for details.
We plan on having live music and will provide an interpreter for the hearing impaired, although I'm not certain we have any hearing impaired attendees on our invitation list.  If you know someone who is hearing impaired, please invite them - we want to be inclusive and diverse!  Speaking of which, if you know any people of color, please invite them as well, as we need to balance out the guest list.

We hope you appreciate these guidelines in the spirit and which they are given. We want everyone to have a relaxing and enjoyable time without any incidences of microaggression or oppression.

Hope to see you there! RSVP regrets only.

Needless to say, we didn't attend the wedding reception.  The list of requirements was so daunting that we nearly had a nervous breakdown trying to conjure up what we could bring with us that would not offend one or more people in attendance.  When we realized that nothing more than a head of lettuce would be acceptable, serving on it handmade clay platter, of course, we decided to tell them we were out of town that weekend.

Alas, even the head of lettuce was on the boycott list.

It is commendable that people want to be friendly and engaging and accommodating of other people's needs.  However, it can be taken to extremes.  If you are person who has special dietary requirements or allergies or other special needs, you can't expect the entire planet to accommodate your every whim, desire, or requirement.  To some extent we all have to accommodate to the needs of the majority, rather than expect them to accommodate to us as individuals.

Sadly, this wedding invitation, which I swear to God is largely verbatim (perhaps with one or two embellishments) is typical of the sort of nonsense we saw in Ithaca.  And unfortunately this tends to discredit the Left and provide much ammunition and fodder for the far-right to mock and ridicule liberal thinking.

When a simple wedding invitation contains pages of do's and don'ts and approbations as to what a horrible peanut-eating gluten-consuming non-vegan person you are, it has simply gotten out of hand.   We didn't want to go to this reception because we knew that no matter how scrupulously we followed these instructions to the letter, someone would call us out and chastise us for some perceived error, even if it was unintentional.  Who is guilty of micro-aggression then?

It struck us that all of these requirements by a few people in the crowd were, in fact, the real aggression, not that of the remainder who were merely behaving to society's norms.   It's OK to be different and you should be who you want to be.   However, to expect others to alter their behaviors to accommodate you is, past a certain point, ridiculous.

Yes, we shouldn't discriminate on the basis of race, religion, or gender.   No, the rest of us don't have to stop eating peanuts in public because your kid has an allergy.  Nor should we feel guilty of having a hamburger just because you choose to be Vegan.   And if we throw out a paper plate, it is not an assault on your cultural values.   In fact, it likely is less of an impact on the environment than the hot water and soap used in washing your eco-dishes.

But of course, all of that would be lost on the PC crowd in Ithaca.   So the only real choice we had was to not go to the reception, which of course meant that the people who did go were all of the same mind and mindset, and never met, talked to, or had an earnest discussion with anyone whose world-view was different than theirs.

Call me old-fashioned, or merely polite, but when I was raised, if you went to someone's home or party and they served food you didn't like, you merely politely refused to eat it, rather than demand they serve something to your liking.  If you wanted to be Vegetarian or Vegan, this meant you had to make sacrifices in life - and not expect others to make them for you.   If you want to make political statements, you have to make them yourself, and not dragoon your friends into making them for you.

And of course, if you are going to invite people to a wedding reception, usually it is a good idea to have it catered, than to expect your guests to bring their own food.   It is a funny thing, too, as the couple in question certainly had enough money to pay for a reception, even if it was a modest one.

It was the most left-handed invite (in every sense of the word) I have ever received.   You know, I really don't miss Ithaca all that much!