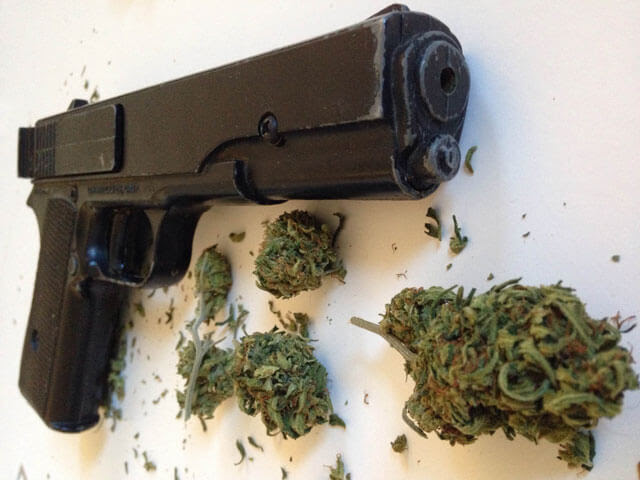 At first blush, peaceful pot-smoking hippies seem to be the last candidates to become gun nuts.  But there is a connection, sadly.

"I saw the best minds of my generation destroyed by marijuana, starving hysterical naked, dragging themselves through the streets at dawn looking for an AR-15 and 5,000 rounds of 5.56 NATO ammo...."

My apologies to Alan Ginsberg, but that's the way I see it.  The best minds of my generation ended up living in their parent's basements, doing bong hits and playing first-person shooter video games, while cleaning their weapons and reading Guns and Ammo and waiting for the day when they too, will be headline news and some poor bastards will be in the wrong place at the wrong time.   It happens.  You do read the newspapers, right?

How does this happen?  How do laid-back pot smokers become angry paranoid gun collectors?   I saw this firsthand, and frankly, it sort of scared me a bit.   Actually it scared me a lot.   My friend Tony, let's call him, was a pot-smoker.   He came from a liberal family that didn't own any guns.   They felt that gun control was  good thing - keep the guns out of the hands of the wrong people - you know, the felons and the mentally ill.   That sort of thing.

At first, Tony enjoyed smoking pot as it relaxed him and put things in perspective.   But as his penchant for the weed increased, his behavior started to change, along with his politics.  It was subtle at first.  He started to embrace "Libertarian" ideas, and one day he brought home Firepower magazine that featured a hippie looking dude on the cover, wearing a bandanna and holding an Uzi in one hand and a MAC-10 in the other, both guns blazing.
"What the fuck, Tony?" I asked, "I thought you were against that sort of shit!"   Tony demurred.  While we had both learned to fire rifles in summer camp, neither of us had much experience with firearms in general.  We didn't hunt or target practice.   But for some reason, Tony decided that automatic weapons were "cool" which I guess they are from a technical standpoint.
But his interests went beyond mere fascination.  He decided later on to buy a target pistol and go to the range and practice.   It was fun but also a little frightening, as he was high most of the time, even at the target range.   Also, the more pot he smoked, the more his mind became unhinged, and this fascination with firearms was part and parcel of the deal.   Marijuana use during adolescence is linked to schizophrenia - whether it helps it, causes it, or schizophrenics self-medicate with it can be debated, but there is a link.

Tony and I went our separate ways.  He moved out of State and years later I saw him.  He had multiple weapons now - and multiple prescription medications for his mental illnesses.   Every time I heard about some mass-shooting in his hometown, I thought, "Please don't let it be Tony!"   And so far, well, we've been lucky.
Tony's example is not unusual, however.  I have met a number of Tony's in the world who start out as peace-loving pot-smoking hippie dudes and progress into paranoid "gub-ment's out to get me" gun and ammunition hoarders.  They are time-bombs waiting to go off.

Now to be sure, part of this may be related to the illegality of the drug itself.  If you were a major drug dealer in the 1970's or 1980's, rip-offs and drug busts were pretty common.   If you didn't have a gun, and you were dealing kilos of marijuana, you were at the mercy of the guy who did have a gun, because you can't go to the Police and report that your pot was ripped-off.
But the Tony's of the world are not major drug dealers, just users.  So this marijuana-gun connection is hard for me to fathom.  And legally, if you smoke pot, you can't buy guns, but I am not sure how the government polices this - unless they can cross-index medical marijuana user with gun registries - and you know how the NRA feels about even computerizing gun records.  Pot smokers are "up in arms" about this, of course (sorry, couldn't help myself).  And of course, it goes without saying that drunks with guns isn't such a swell deal, either, but that's legal, all day long, so long as you are sober when you buy it.
What puzzles me, though, is why pot smokers would even want weapons around.   After all, it would seem that playing with guns while high would be "harsh" and "uncool".  I know I certainly would have (and did) freak out when my friends started playing around with their handguns when we were stoned.  "Don't worry, dude, it ain't loaded!" they'd say, "Oh, waddya know? There's a round in the chamber!"

Stupid stoner tricks and firearms are a bad mix, in my opinion.
But maybe "Tony" did me a favor.  When I saw his life go off the rails as a result of pot smoking - and his personality change accordingly, I realized that while marijuana might not physically harm you (like cocaine, methamphetamine, or opiates) it does affect the way you think - hence the term, "mind-altering drug."  And over time, it can turn you into a different person - someone you might not recognize before you started.   It is not an immediate thing, but something that occurs over time, slowly.

But again, I know from experience that trying to tell this to a po-thead is fruitless.  It becomes almost like a religion - it is a religion - and the marijuana user either has to figure it out for themselves or keep smoking all their life.

It just strikes me as odd that someone would want to smoke a "peaceful laid-back" drug like marijuana and then collect weapons and ammunition designed for one thing in mind - to kill other people.