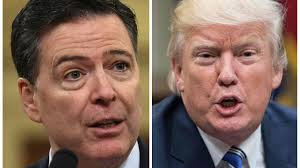 One problem with the smart phone is that using it can become compulsive.  Checking the "news" apps every day doesn't necessarily make you more well-informed, but rather more anxious and depressed.


If you read nothing but the New York Times OpEd page, you would assume that Donald Trump was going to be impeached next week.  However, this may be a little overstated.   In order to come up with an "obstruction of justice" charge, they would have to prove that President Trump did more than ask Comey to drop the Flynn investigation - he would have to actually obstruct it.   And since we have not heard from Mr. Comey yet, or read his infamous memos, the Left-wing press is getting a little ahead of the story.

I'm not saying there isn't malfeasance here, but it has yet to be proven.  Yet.   Also, people are not "doing the math" on this and figuring out that a Republican Congress might not be willing to impeach a Republican President.   You'd have to win the mid-terms first and then have a Democratic Congress go at him.

But maybe the GOP wants Donald gone, too.   Why?   Vice-President Pence.   The far-Left is whining about Trump and wringing their hands, shouting at town hall meetings, and writing letters to the editor and op-ed pieces.   Any day now, this will bring down the administration!   Talk about delusional.

But the Left hasn't done the math on this, either.   Who takes over when Trump is gone?   A homophobic right-to-life right-wing nutjub from Indiana.   If you thought Trump was bad, Pence will be far, far worse.   This guy will be able to align the far-right in Congress and steamroll through drastic legislation that Trump has had trouble enacting.

The Donald is at least a populist in name only - and a former Democrat and Pro-Choice guy.   He claims to be friends to the gays.   Maybe these are thin credentials, but they are better than Pence's.   Of course, there is the crazy part and the tweeting and whatnot.   But if you look at what Trump has actually accomplished, other than turning ICE into the most asshole of law enforcement agencies and appointing a Supreme Court Justice, he has accomplished nothing.

But that's not the point.  The point is, whether Trump is impeached (a long-shot until the mid-term elections, at the very least) or not, it will happen without my intervention.  I don't need to read the news and get depressed.  I don't need to go to a town hall meeting and scream at people and make an ass of myself.  This shit happens without our input.

Oh, right, you think your opinion counts.   Well, it did, last November.  How many of these people wearing pussy hats, screaming at town hall meetings or being ejected from Senate hearings actually voted for Jill Stein?  I suspect a whole helluva lot.   And I suspect these are the same people who let  The Bernie Sanders Show run into syndication - tearing the Hillary campaign to pieces while Trump sat on the sidelines and ate it all up.

Your personal opinions mean nothing.  Polls are fine and all, but Trump doesn't give a shit about them - he makes up his own.   And most GOP districts are so gerrymandered as to be bulletproof.  You can say such-and-such politician is "unpopular" but he likely will be re-elected anyway - unless you do something other than scream at him (which only makes him look like the rational guy in the room).

What we need is less Bernie Sanders, less pussy hats, less screaming and protesting, and more moderate centrist Democratic candidates who actually could win some swing districts.   That is, if you want to change things from the way they are and are not content with the status quo (the latter being a shrinking demographic to be sure!).

Sadly, the Democratic Party, like the GOP before it, when it lost the White House, has lost its collective mind and seriously thinks that more radical politics is what we need.  Socialize medicine! double the minimum wage!  Pay everyone a "guaranteed minimum income!"  You  may think some of these ideas are sound - I have demonstrated that most of them are not.  The  point is, the vast majority of Americans don't agree with far-left politics, no matter how "bad" things are now.  And so far, they aren't so bad.