Another Day, Another Airline Outrage Story! 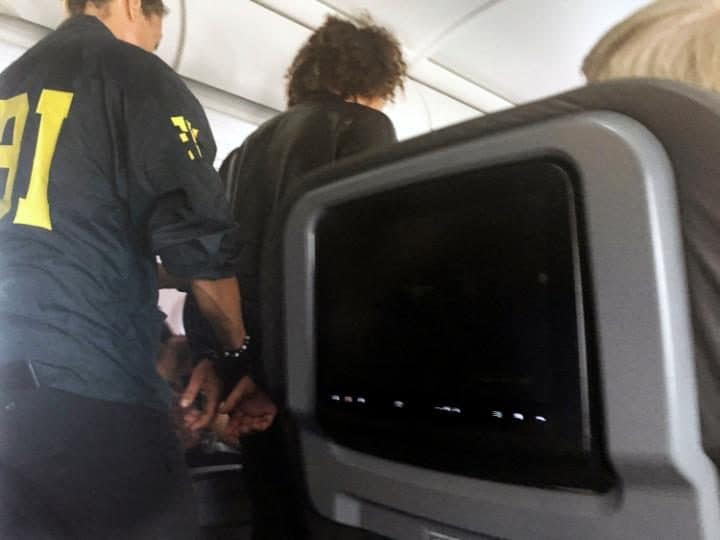 What has the world come to when a man can't get drunk, open an emergency exit at the airport, get on an airplane, mumble incoherently and then try to charge the flight deck?  Airlines are assholes, man!

Another day, another airline outrage story.   People have chastised me for not "seeing the light" and feeling sorry for some guy who refused to get off a plane when asked to and was dragged off and injured himself and made a big issue of it - and of course sued the airline and got a ton of money.   And he was a stand-up guy, too, apparently a "doctor" who was only slightly disbarred for trading sex for prescription drugs in motel rooms.  I mean, come on, we've all done that at one time in our lives, right?

This latest outrage involves a man from Turkey, who apparently was pretty wasted when he opened an emergency exit at the airport in LA that lead out to the tarmac.   He got away with that, perhaps because TSA is now sensitive to accusations of abuse and profiling.  Hey a Muslim guy from Turkey, trying to get out onto the tarmac?  Let's not profile here, right?

So they let him on the plane, and he goes back to the lav and leaves a laptop on someone else's seat.   Now, if you even glanced at the papers these days, you know that laptops are now paranoia level seven with the TSA.  But no worries, they give it back to him as he goes up to first class and tries to cadge a seat there - near the cockpit - before he is escorted back to row 35.

Did I mention he looks as disheveled as Steve Bannon (now there's a guy who should be on the no-fly list!)?

So anyway, during the flight, he tries to rush the cockpit, and a nervous stewardess - excuse me, flight attendant blocks the aisle with a drink cart and passengers subdue him and duct tape him to the seat!

The outrage!  Treating someone like that!   How cruel and unusual!  All he did was disregard the instructions of cabin attendants, and as we all know after the United incident, we don't have to pay attention to those sky-waitresses anymore.  Fuck 'em!  I paid for a ticket, I can do what I want!

What is odd is the lack of outrage over this latest incident.   People are all up in arms about one scenario but not another.   But I fail to see the difference between the two.  Both people were acting irrationally and oddly, who refused to obey the orders of the cabin crew.   Both deserve what they got.

But the general public are idiots.  They see "outrage" on Facebook and rush to judgement, without considering the consequences of taking sides until both sides are known.  And in both cases, we have people who were behaving oddly and should have been removed from the flights just on that basis.   But instead, we project all of our frustration and pain in dealing with airlines onto a situation and give the guy a pass - at least in the first scenario.

In the second scenario, the cabin crew are heroes, because we are all paranoid about terrorism and Muslims - even so-called liberals who secretly harbor fears of Islam.   And you know what?  The cabin crews in both scenarios had difficult jobs to do, and it doesn't help when people behave badly on airplanes.

I have no truck with the airlines.  I have a BIG problem with the traveling public, who act as if their $99 ticket entitles them to own the airplane, or at least the luggage space over my head.   Flying today isn't fun, to be sure, but the general public makes it less fun.  And by taking sides in these silly incidents, we aren't helping matters any.  We are encouraging and promoting bad behavior.   Hey, start an incident on an airplane and you might win litigation lottery!

We already have seen this - a guy who is a "YouTube Prankster" starts shouting in Arabic on a plane and then makes a big fuss when he is thrown off the plane.   No one felt sorry for him - although he clearly tried to make this into a "religious discrimination" incident.

What is the solution to all of this?   Here is my proposal.   From now on, the FAA should mandate that at least one random passenger is thrown off the plane before each flight.   No reason need be given, other than you don't own the plane and get the fuck off.   Every airline should do this, so people can't use the lame argument, "I'll show you, I'll fly the other airline" (because there are basically only two now anyway).

This policy will drive home the fact that it ain't your fucking plane, and your "rights" end the minute you walk down the jetway.   Yes, your rights - all of them.  Free speech, right to bear arms, search and seizure, etc.  You get on someone else's plane, you are fucking cargo and should be treated as such.   Shut the fuck up, sit the fuck down, eat your fucking peanuts, and God willing, we'll get you to Tulsa in about 2 hours.  And if not, too fucking bad.  Read the contract of carriage - it is a "best efforts" contract.

No more of this shit about dead rabbits or whatever.  Here's a fucking clue: pets die on airplanes all the time.   When you ship your pet by air, you take a risk the cargo compartment may depressurize, be unheated, or whatever.   Pets die all the time, but we get all weepy about one rabbit because it happens right after an event popularized on Facebook.

Fuck Facebook and fuck people on Facebook.  These are the same morons who gave us President Trump and now want to protest President Trump.  They get all up in arms over incidents without bothering even a moment to reflect, and they forward crap and start the pitchfork and torch parade without even thinking where it is going.   Facebook people are the scared ninnies that gave us fake news.   These are the people bringing down civilization.

In the meantime, I am starting a "go fund me" page for this Turkish dude so he can sue the airlines, as he rightly should.  After all, we know that everyone from Turkey is peaceful and loving, from the President, right on down to his security detail!  How dare they profile!
Newer Post Older Post Home