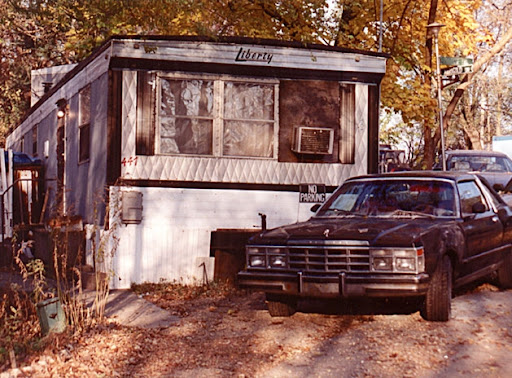 Some folks think that my blog is some sort of advice column for the poor.   Far from it.  I have no advice for them, as they are utterly fucked, period.   However, if you are an educated middle-class person who finds themselves sliding down the economic ladder.... well, there may be hope for you, yet.

Traveling through Western Georgia, you get to see how the other half lives.  And as I noted in my half-assed fencing posting, the poor seem to like to live in trailers by the side of the highway, surrounded by every single damn thing they have ever bought in their lives, scattered across the front yard.  (But at least they appear to own the property the trailer is on, rather than rent it.  That's something).

Maybe it is some sort of status thing we in the middle-class cannot fathom.   After all, if you have three sofas in your yard and one on the front porch, it means you have a new one in the living room.  You must be doing pretty well, to afford five sofas in a row, right?   The same is true for cars - abandoned cars on the front lawn provide a visual record of the owner's history with the automobile.   If you have 10-20 junked cars on your lawn - in addition to the "running" ones, it means you bought all these cars during your life - a sign of real wealth!

Maybe that is it.  Or it could be an example of constipated commerce.  I don't know.   As an educated middle-class person, I see valuable scrap metal that could be liquidated and converted to invest-able cash.  I see used furniture that could have been sold at a garage sale to pay for this week's groceries.  I see an improved "curb appeal" to the home which would bring up home values and increase my equity in the property.

But then I realized that the folks living in these trailers will never see what I see, and I will never see what they get out of a yard full of junk.   It is not a matter of snobbishness or class-warfare or anything like that.   Many of these folks make good money (or made good money) at jobs at one time or another - but it gets squandered as fast as it is made by purchasing "things" - on time, of course, rather than investing or trying to improve their situation in life.

And this will never change, either.   The poor are not poor because of circumstance or "bad luck" as many on the Left like to posit.   They may start out poor because of a shitty social situation, but they remain poor because they simply don't understand money, are not very smart and this likely will never change in their lifetimes.  And it is not condescending or "wrong" to say this, as it is the truth.   But sadly, today, truth-telling will get you into trouble.  You are better off repeating lies, such as "these people are less fortunate than ourselves" as if poverty just happens to people for no reason whatsoever.   But lies are never helpful.

While driving by these hovels, we were tuned to People's Public Radio, which was nearly drowned out by 100 Jesus stations (another place the poor spend money).  On PPR, they had some guy on a talk show - one of these ones that has boops and beeps in the background (this one with a beat!) talking about how hard it was to live in the ghetto and how no one who never lived in his shoes would ever understand what he went through and moreover had no right to judge him because of how hard he had it.   In other words, you are not allowed to have any opinion other than to feel sorry for him.

I shut the radio off.  This is why the Left loses elections.   I suppose as Liberal NPR listeners, we are supposed to cluck our tongues and feel sorry for this guy and maybe be a little afraid of him, too, because, you know, black.   Yea, that is how the Left is racist - buying into nonsense.   And I am not kidding about this.  There are people on the Left who argue that criminality is "part of being black" and we shouldn't judge that.   This is beyond sick - it is racist as well.

But a funny thing.   I know some black people who grew up in the same ghetto as the announcer on PPR, and they found their way out by not buying into the feel sorry for me motif, but instead getting the fuck out of a poor neighborhood anyway they could and never looking back.  This is not a lot of people to be sure, but it does illustrate  it is possible to rise out of poverty in the USA through hard work, education, and effort.  It happens every day.  And every day a lot of people slide the other way.

It is the same reason, I don't revisit Chittenango, New York.   There was nothing there for me but a squalid life with no future and no hope.   Leave and don't look back.   And no, it ain't easy.  If it was, we'd all be billionaires.

But again, people who are chronically poor don't get this and never will get this.   They sit on their porch in Flint, Michigan, and tell the nice lady from the TeeVee how awful things are and how they don't want to leave "their hometown" even after it has been a long-running butt of jokes since, well, since even before Michael Moore became famous lampooning it in  Pets or Meat.  When I lived there in 1978, it was known as "the armpit of Michigan" - and hasn't improved its image since.

So I get flack from idiots on the Left (I am being redundant) who say, "You don't know how hard it is to be poor!" (not true) and things like, "You make it sound easy to escape poverty, but it isn't!"

No, it isn't easy to escape poverty - and I never said it was, only that it was possible.   But quite frankly, it is literally impossible for the vast majority of poor people to lift themselves up.   What is holding them back?   The government?   The big corporations?   Racism?   Social Attitudes?   Nope.   Try again.

In both cases, though, these folks aren't reading what I just wrote.  They aren't reading at all, in fact.  Not a book or magazine in the house.  Yes, a big TV sitting with no stand, but not a book.   The people "mad" at me about what I say are middle-class and upper-middle-class people who feel sorry for the poor and think there is some magical solution to poverty, usually involving paying people someone else's money.

You throw money at the poor, they remain poor.  This is the conundrum.   It just means a new trailer, more stuff in the yard, and yet another ve-hickle to run down and tear apart and leave in the side yard up on blocks.   In the city is no better, and the really sick thing is the pittances handed out are never enough to really get ahead such as starting a business, going to college, or moving out of the ghetto.  Instead, they are just enough to keep you in stasis, living in these warehouse-like conditions, for generations at a time.

The smarter people - they leave the trailer park or the ghetto and find some way to succeed.   The rest?  They accept this as "normal" and throw another piece of furniture onto the front lawn.  "It was broke, anyway!"

And this latter behavior will never change as the folks who live like this see nothing wrong with it and in fact, like it.   It is not dissimilar from the homeless drug addict living under the bridge panhandling for money.   He likes his lifestyle and doesn't want to change it.  He doesn't want a "job" or a house or other responsibilities.  He wants to be as high as he can for as long as he can.   And if you talk to people who work with the homeless, you will hear this - the only time that guy will come into a shelter is when it is freezing out.

So what's the point of all this?   Well, for starters, if you've read this far, you have no excuse to be poor, as you are smart enough to see the difference between a trailer strewn with trash and a neat and tidy home.   You are smart enough to understand the value of money and see through the shitty financial deals offered to the poor.   In short, you have no excuses for being poor.

The rest of the poor?   We can feel sorry for them all we want to, it won't change their condition much.  You can throw money at them (please, use your money, not mine!) and it won't change their condition much.   And please, don't give me that sad-sack-of-shit story about "the starving poor" in America - we have the fattest poor people on the planet.

Maybe a change in cultural values will change things.  I am not sure.  Trailer homes and ghetto homes like this exist all over America, not just in Georgia.  We've seen them, everywhere.   Maybe more education will help.  But in edu-centric New York State, we saw just as many of such trailer homes as here in Georgia - and just as many housing projects.

It sounds heartless, but I think there are just people you can't help much, because they are just not very smart.   You give them food stamps and assistance to keep them from starving, for sure.  But you can't expect them to change their behaviors, as they see no need to do so.